Note: This article was first published on 10th April 2019 and updated for local pricing and availability. 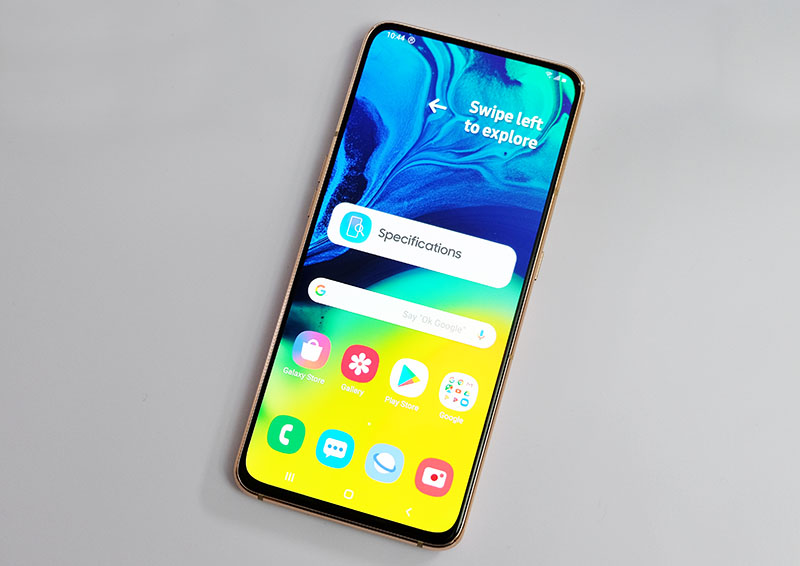 Samsung unveiled the new Galaxy A80 smartphone at a Galaxy event in Bangkok (dated April 2019). The A80 sits at the top of their newly refreshed mid-range A series and is Samsung's first smartphone with a pop-up rotating camera.

On the back of the A80 is a triple rear camera setup, comprising of a 48-megapixel, f.2.0 main lens, an 8-megapixel, f/2.2 ultra-wide lens, and a 3D depth sensor for Portrait Mode shots. The rotating mechanism allows the rear camera to also double up as the front camera. Just switch to selfie mode and the entire top section will rise up, with the camera module flipping over to the front. 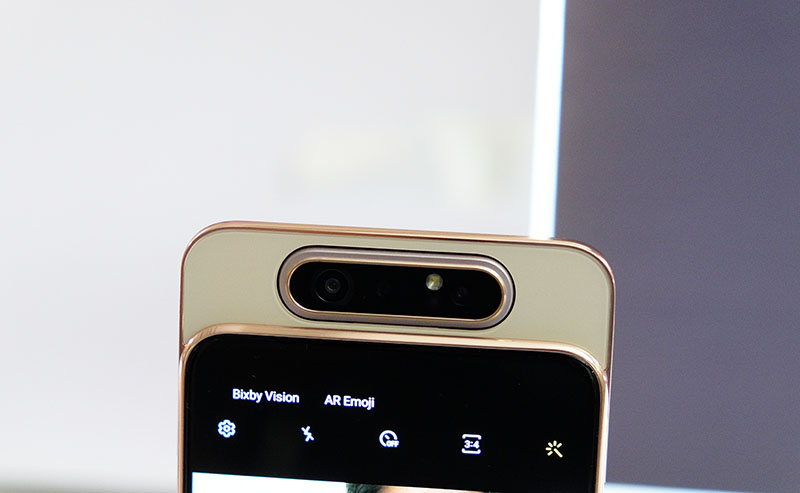 The whole process takes about one second. You can retract the camera by exiting selfie mode (or by applying light pressure to the top of the mechanism, although this is probably not a good idea).

The pop-up mechanism means that there's no notch or cutout on the front of the A80's display. Samsung is also using an ultrasonic under display speaker so there's no visible earpiece either, making the 6.7-inch Full HD+ AMOLED display truly full-screen. The bezels around the display are tiny too, and the phone's overall size is much smaller than you would expect for a 6.7-inch screen (165.2 x 76.5 x 9.3 mm). The display is flat rather than curved at the sides like the S10 and S10 Plus, but that doesn't take away from how gorgeous it looks. Unlike last year's Oppo Find X, which also had a pop-up camera, the A80 only uses the pop-up mechanism for selfies. To unlock the phone, it uses an in-display fingerprint scanner. This should put less wear and tear on the mechanical pop-up mechanism. If you're wondering about what type of case you'll be able to use with the A80, the phone will apparently come with a clear plastic case included in the box. The case will only cover three sides of the phone, with the top left open, allowing for the camera to slide up.

The power button is found on the right side of the phone and fortunately, it's better positioned than the one on the S10, which was way too high up (this is actually a nice side-effect of the sliding mechanism taking up space at the top of the phone). On the left side, you'll find the volume rocker, and on the bottom of the phone you'll find a downward firing speaker, and Nano-SIM card slot. Unfortunately, there is no microSD card slot, which means you're stuck with the phone's 128GB internal storage. 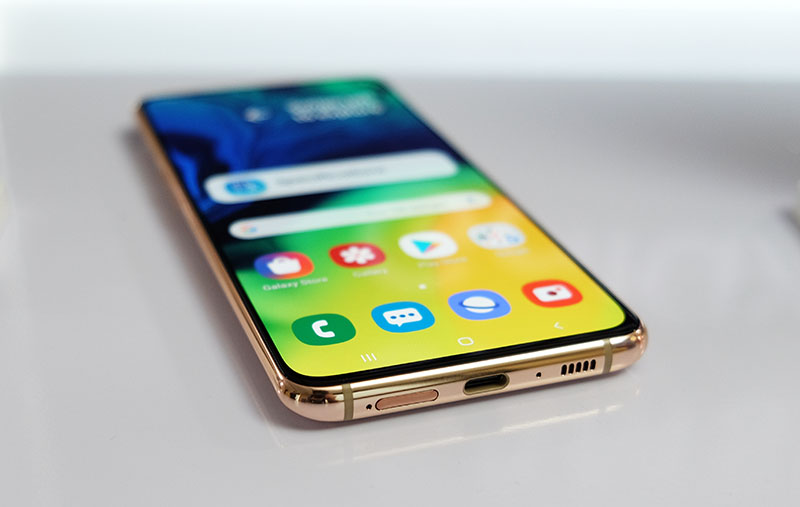 Curiously, this is also the only Samsung phone without a 3.5mm headphone jack. From the looks of it, there just wasn't room for it on the bottom of the phone, and obviously, the pop-up mechanism means that it can't be located on top. Furthermore, a Samsung representative told me that there will not be a USB-C to 3.5mm dongle included in the box, although it will come supplied with USB-C earphones.

The phone will be available in three colors: Ghost White, Angel Gold, and Phantom Black. All three colors look great, but they're definitely fingerprint magnets. I really like the Phantom Black color, which is ultra shiny and reflective and reminds me a lot of the Ceramic Black S10 Plus. 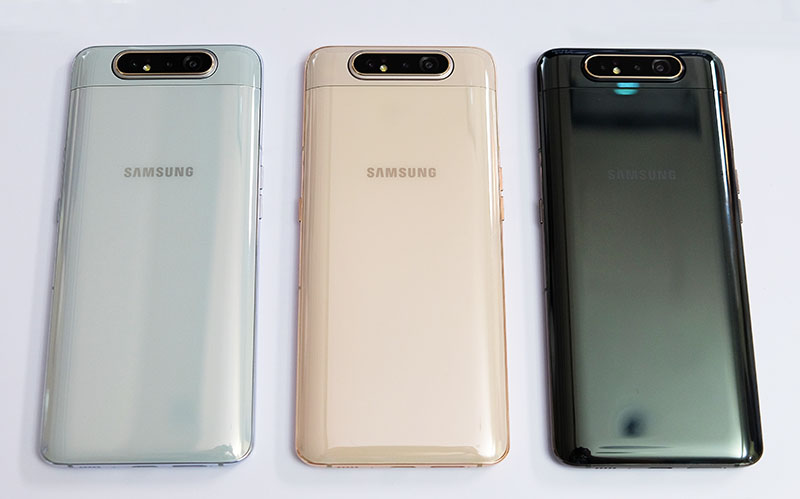 Performance-wise, the phone is powered by a currently unnamed octa-core Exynos processor with a dual-core 2.2GHz + hexacore 1.7GHz setup, with 8GB RAM. Like the S10, the A80 will run on Android 9.0 Pie with Samsung's One UI on top of it.

As for the battery, the A80 has a 3,700mAh battery and is equipped with Samsung's new Super Fast charge technology. This is an updated version of Samsung's Adaptive Fast Charging that supports up to 25W. This actually makes it faster than the fast charging on the S10 and S10+, both of which only charge at up to 15W. Unfortunately, despite having a glass rear, the phone does not have wireless charging.

I really like the massive full-screen, notchless display of the A80 and the pop-up camera mechanism that enables it. I also like that the rotating camera lets you have a better quality front camera than you would normally find on an upper mid-range phone.

However, that mechanism comes with quite a few compromises. It means that the phone has no dust/water protection, no expandable storage, and no 3.5mm headphone jack. These are all things that have become standard on many high-tier Samsung phones, so removing them feels like a step backwards. Any sliding mechanism also comes with added concern over the durability of the mechanism. If you don't take a ton of selfies, this probably isn't an issue, but it's still an extra something that can potentially break down on your phone.

The Galaxy A80 will be available from 6th July at selected telco operators, major electronics and IT Stores, as well as authorized mobile retailers, Samsung Experience stores and on Samsung's official Lazada online store.

Thankfully, all three colors are available - Ghost White, Angel Gold, and Phantom Black - and will retail for a recommended price of S$898. Pick up the phone here now.

If you're not looking to splurge close to S$900, you may want to consider Samsung's next Galaxy A-series model down the line-up, the Galaxy A70 at S$497, which also boasts a massive screen, triple rear cameras, and an even larger battery pack.