Held at their flagship store at Vivo City, Samsung's launch of their new notebooks sport a sleek and sexy theme, but they still pack a punch in hardware department too. All of the notebooks come specced with various Intel Core i5/i7 mobile processors, while their latest netbook is loaded with the new Intel Atom N550 dual-core processor. Topping it all off, some of these notebooks are using new Lithium-Polymer batteries, which means a longer battery life for users!

Now, during the event itself, we've heard some ambitious plans from Samsung regarding their plans for this year and the next. Most importantly, it seems that they aim to be the number one in the netbook category locally with a 20% market share by the end of the year. And for next year, they are gearing up to be the top three notebook brands in Singapore. This momentum and drive is interesting, given how Samsung previously had a notebook presence in Singapore, then pulled out because sales weren't too hot for them. It looks like Samsung's brand awareness has greatly improved for the notebook team to have confidently stepped back into the local market and are doing pretty well in this sector as of late. 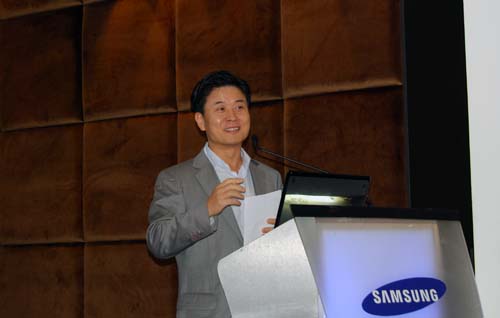 Let's take a quick look at what Samsung has in its lineup to support their plans:-

First up, the sexy Samsung QX310, clad in an aluminum exterior, the design of the notebook may seem familiar, but it does have its own unique charm. It's one of the newer models from Samsung to sport a non-removable Lithium-Polymer battery, so expect long lasting battery life (rated for 7.2 hours according to marketing specs). For S$1799, you'll be getting a Intel Core i5-460M (2.53GHz) notebook, with NVIDIA GeForce 310M with Optimus capabilities. That's not a bad deal at all for the newest notebook in town. Second on our list, the youth friendly design Samsung SF series features a scratch-proof glossy exterior, but has a matte finish on the interior. So while your fingerprints will smudge the exterior, at least the interior would be spared from this problem. Like the QX310, the SF310 and SF410 will have a non-removable Lithium-Polymer battery, and are powered by the same Intel Core i5-460M (2.53GHz) processor. So too are their graphics engines, as they are powered by NVIDIA's GeForce 310M with Optimus. 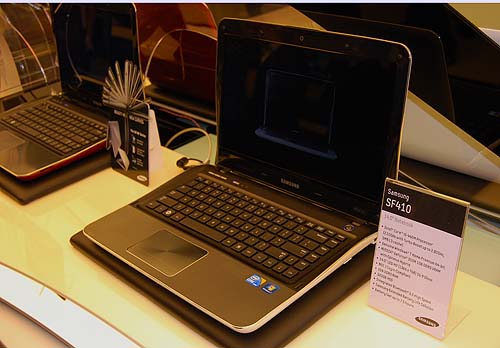 Third on our list of newly launched notebooks is the RF series from Samsung, and these are the ones to get if you're looking for something you can game with. Looking very 'space-age' with its metallic finish, the RF series has two models - the 14-inch RF410 and the 15.6-inch RF510. The RF410 retails for S$1899 and has an Intel Core i5-560M (2.66GHz) processor, while the RF510 retails at S$1999 with an Intel Core i7-720QM (1.60GHz) quad-core processor. Both come packing a brand new NVIDIA GeForce GT 420M discrete graphics engine for better gaming experience with DirectX 11 support. The GeForce 400M series of GPUs were barely officially launched and it's good to see it has trickled into Samsung's new series today. 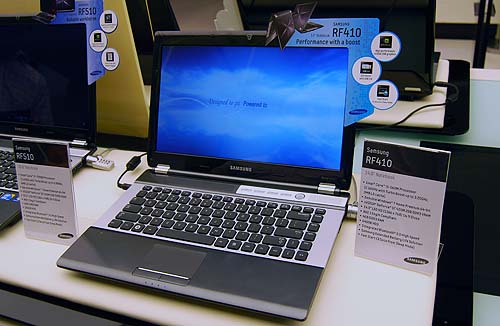 Last on the launch list is the Samsung NF210 netbook, which has a very nice curved design, an anti-reflective LCD display and powered by an Intel Atom N550 dual-core processor, the fastest Atom from Intel yet. It also features the Samsung Fast Boot, a three second start-up from sleep function and will retail for S$699. 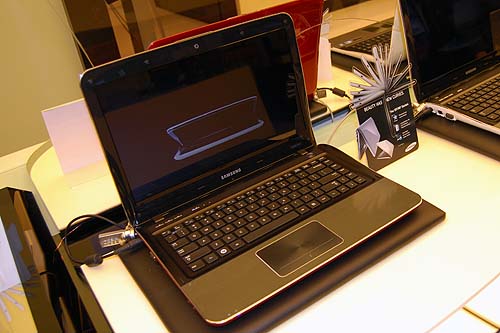 Besides the newly launched products, other Samsung products like the Samsung N150 Plus netbook, the Samsung R440e and the Samsung R480 notebook have all gotten a hardware refresh, so feel free to check them out if you liked those models but were hoping updated hardware specs. The R440e and the R480 have gotten an Intel Core i5-450M processor and an ATI Mobility Radeon HD5470 discrete GPU while still maintaining  a price of S$1249 and S$1299 respectively.