One of the greatest worries that awaits you whenever you make an overseas trip, is a huge phone bill. This is even more prominent with the proliferation of smartphones, which sees users depending heavily on data usage wherever they are.

However, service providers across countries have been working closely and signing agreements to lessen the cost and burden on travelers. From data roaming charges that cap at a certain amount, to cheaper rates, these are just some of the possible ways for telcos to work out a better deal for consumers.

But these options are still costly, which could lead up to three digit figures in the final bill. And if one isn’t careful, the combined cost of data and cellular charges can hit an astronomical sum. Besides the earlier tie-ups with telcos across the globe for roaming charges, smartphone users can also opt to purchase post-paid plans.

The concept is simple - you are essentially purchasing a plan similar to the post-paid plans, which comes with billing cycles. In essence, it’s like getting a line from the telcos from the country you’re visiting, only that you are billed to a local company that provides you with the line.

Matrix Cellular Pte. Ltd. is one such example. The company offers international SIM cards, data cards and data packs for both business and casual users who travel overseas. As mentioned, the company works on the post-paid concept. As such, if you’re traveling to the United States, you’ll be issued a SIM card that’s tied to the AT&T network, and given a set of bundled minutes for local incoming and outgoing calls, text messages and data.

According to Matrix, the company can offer up to 80% in savings with its services when it’s placed against standard roaming charges from the three telcos in Singapore. Earlier this year during CES 2012, we had a chance to put that to the test. Here’s a case study on the charges we incurred through the Matrix post-paid plans, compared against the cost of using international roaming charges.

Matrix’s post-paid plans come in two components - cellular and data. The cellular component is covered by two different packages, the first covers up to 10 days while the other 30 days. As such, the bundled talktime is slightly different based on the number of days you’ve signed up for. Here’s a breakdown of the 30-day plan that we tested:

Now that’s the base price that you’re paying, if you were to stick to the allocated talktime and data within the package. However, there are prevailing charges that are beyond the package. The question is, how does it compare against the standard roaming charges from the three telcos In Singapore? Here’s a table to illustrate the prices of SingTel, StarHub and M1 against Matrix’s offer.

In our case study, we tried a 30-day package, which gives you 300 minutes of local incoming and outgoing calls. Over a stretch of five days, we tested the 30-day package with the following usage clocked in:

Here’s the breakdown of the total cost incurred across the four different plans:

The only caveat is that you’ll be issued a US number, so you’ll have to ensure that the number is made known to your contacts, be it at home or in the US.

As evident, the highest cost component lies with data usage for SingTel, StarHub and M1. What Matrix has provided, is 2GB of data for US$45, with a nominal charge of US$0.25 per MB for any data exceeding 2GB. 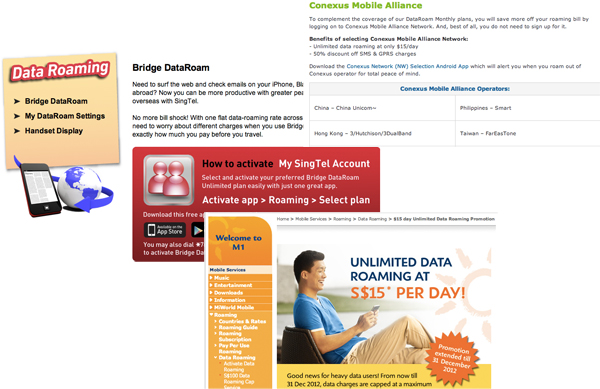 However, with the proliferation of smartphones and its heavy reliance on data, telcos have worked out data roaming plans with its partners worldwide. All three telcos in Singapore do offer unlimited data roaming at a fixed price, usually in the range of S$15 per day.

Matrix does provide unlimited data for specific countries such as Hong Kong, Malaysia, and Thailand. But it doesn’t come in close to the coverage areas of what the three telcos are able to offer.

But in reality, data downloads usually won’t be so heavy, to the point that you’ll exceed a 2GB limit provided by Matrix. In fact, while we were reporting live from CES 2012, the highest data we’ve clocked is 159MB, which is well below the 2GB limit over 30-days.

Deal, or No Deal?

What Matrix is offering, is a solid deal if you’re a frequent flier to certain countries. With a local number tied to that particular area, it definitely reduces your overall cost stemming from incoming/outgoing calls.

Data usage, however, is very subjective. The three telcos have built a strong case for its unlimited data roaming plans with its global partners. Matrix’s plans are just as practical, for the fact that travelers might not require unlimited data usage. In those cases, forking out US$40 for 2GB of data which can stretch itself out for perhaps 5 days or more is still more cost effective than spending S$15 per day for an equal number of days. That is, if you’re not a data hungry user and spend way too much time on streaming websites such as YouTube.

There is no clear answer on whether Matrix offers a more affordable alternative to what the three telcos are offering. What we’ve done is show you a case study of a potential user. Ultimately, the onus is on the user to do his due dillegence and conduct some research. As such, here’s a list of useful links for you to go through if you’re choosing between Matrix and the three telcos: