Review: Netflix's Shadow and Bone is a sprawling fantasy with plenty of heart

Review: Netflix's Shadow and Bone is a sprawling fantasy with plenty of heart 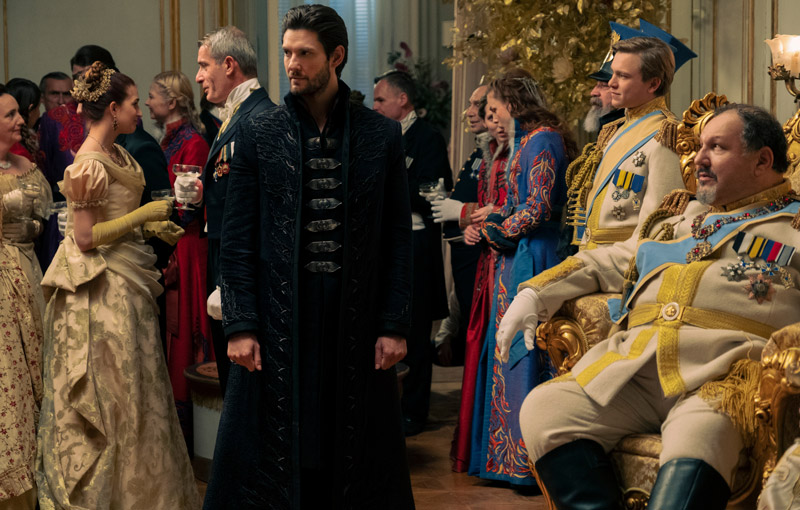 It’s a good time to be a fantasy fan.

The wait for Season 2 of The Witcher has been painful, but Netflix has us covered with another new fantasy TV series - also adapted from a beloved book series. This is Shadow and Bone, an eight-episode dark tale woven with magic and lovable characters, taking place across a vast and fully-formed world fractured by the enigmatic Shadow Fold. The neat thing about having not one, but two book series to pull from is that this world already feels fleshed out from the get-go, and the series is just taking its time to peel back those layers.

Netflix and young adult fantasy are a common pair these days, but Shadow and Bone feels different. It feels fresh and exciting, its ambitious story of monsters and magic anchored by likable characters and a constant sense of high stakes drama no matter which direction the narrative shifts toward. I haven’t read Leigh Bardugo’s Grishaverse books, which this series is based on, so I cannot comment on its faithfulness to them - but I can say that I was addicted to clicking that ‘Next Episode’ button all the same.

What lurks in the Fold? 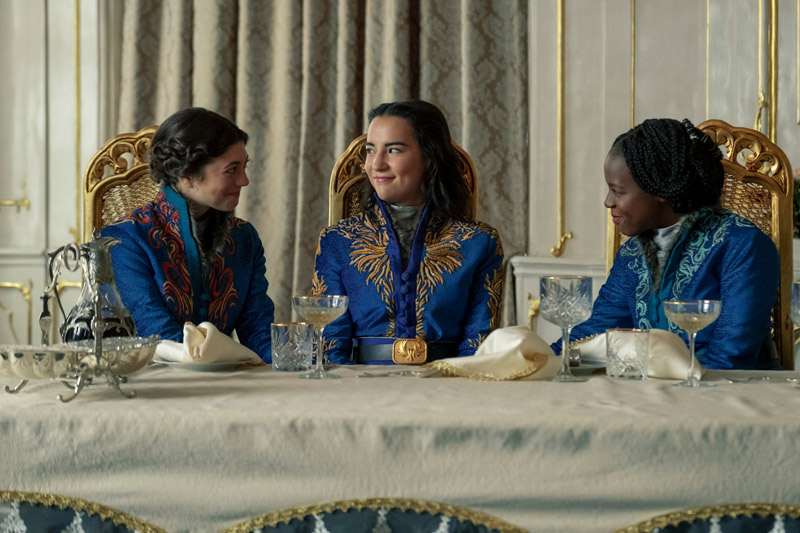 Shadow and Bone doesn’t just adapt Leigh Bardugo’s main Grisha trilogy of books, but its spin-off Six of Crows duology as well. Hence, this season follows two sets of characters in very different parts of the world - though their storylines eventually converge before branching off again. The series mainly takes place in Ravka, a war-torn land inspired by Russia that the Shadow Fold has split in two. The Shadow Fold is a vast stretch of impenetrable darkness filled to the brim with winged monsters known as the volcra, making passage through it a rather suicidal notion.

Ravka finds itself fractured in two halves: East Ravka and West Ravka, with one having to move through the Fold and suffer heavy losses to deliver supplies to the other. Obviously, this arrangement is less than ideal, and as tensions rise and talks of secession bloom, Shadow and Bone’s story begins. It’s pretty easy to spot a book adaptation when you see one - their worlds and characters tend to come rich in detail. This series is no different, almost overwhelmingly so at times, but its practical sets and costume design feel so lived-in and intricate. It’s easy for fantasy stories to bleed into each other these days, but there’s a visual flair and a keen eye for detail here that makes its world immersive.

The bulk of Shadow and Bone’s plot falls on the orphan Alina Starkov’s shoulders. This young soldier simply wants to get by with her best friend Mal, but an unexpected call to arms drags them both into a journey through the Shadow Fold. Predictably, things go south very quickly and after a bloody volcra attack, Alina demonstrates an extraordinary power that might be the key to destroying the Shadow Fold forever, uniting Ravka and easing tensions that near their boiling point.

A feast for crows 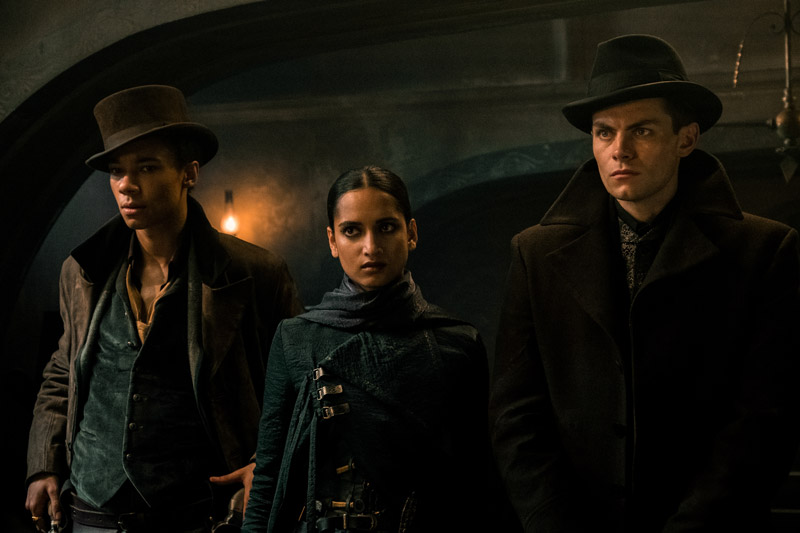 Elsewhere in the world lies the bustling hubbub of Ketterdam, a place far away from Ravka with a seedy underbelly wherein Kaz Brekker and his ‘crows’ Inej Ghafa and Jesper Fahey thrive. The trio stumble upon a very dangerous opportunity to make a proper name for themselves in the crime underworld, and set off on a journey that will eventually have them cross paths with Alina. Alina and Kaz’s storylines are very different in tone. While Alina fumbles her way through acting as Ravka’s suddenly-appointed saviour, Kaz and his crows navigate gunfights and perilous encounters with the volcra. One adventure feels laced with political drama, the other explosive with swashbuckling action. Later on, the series even introduces a third storyline revolving around Matthias Helvar, a Fjerdan soldier and a captured Grisha, Nina Zenik.

Shadow and Bone goes back and forth between all of these characters, but its expansive setting easily accommodates them all. It feels almost like Game of Thrones, with the way these characters are trotting about very different parts of the world. The series has a great sense of pacing though, so one never has to worry about the story slowing down too much. If Alina is experiencing the ins and outs of high society, Kaz and his crows bring the action, for example. It’s not like the show loses itself in this wide scope. There’s always something interesting going on in each storyline, so you don’t feel let down when the focus is pulled away from one character to the next. 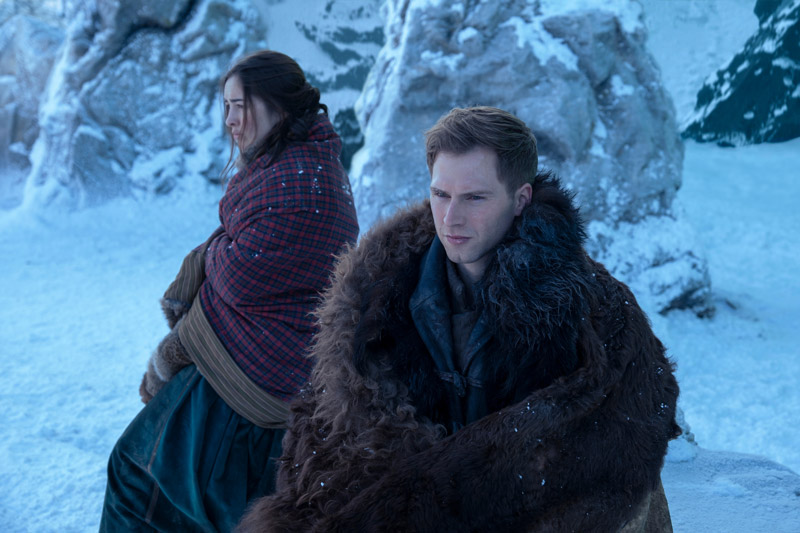 That being said, this series would lose much of its appeal without the charm of its characters. The weight of the crows’ storyline would be entirely lost if Kaz, Inej and Jesper didn’t share so much chemistry with one another. Kaz is desperate to climb the slippery rungs of the criminal underworld, but beneath his reckless, cold exterior lies a strong loyalty to his crows. Jesper and Inej are badasses in their own right, but both of them have darker issues to tackle. By comparison, I found Alina Starkov sadly lacking despite a compelling performance from Jessie Mei Li. The series does nothing to alleviate how tired the ‘Chosen One’ trope she’s got going on feels today, and the love triangle that soon forms around her does so without believable chemistry.

What makes her interesting is this fish-out-of-water situation she’s been dropped into. Ravka is at war with an Asia-inspired land called Shu Han, and Alina just so happens to be half-Shu. The fact that everyone around her treats her antagonistically, seeing her as the enemy when she’s the only Asian character in the room, feels startlingly relevant to today’s dark times. After growing up in so much adversity, the Darkling and shadow-controller General Kirigan picks her up and announces her as the saviour of Ravka, and suddenly Alina has to deal with all this prejudice being replaced with boundless shock and awe. This is new to the series, and a smart choice in its adaptation of the books. Alina's decisions are dumb and their outcomes are predictable, but there’s potential for growth in her portrayal.

A vast world, a short binge 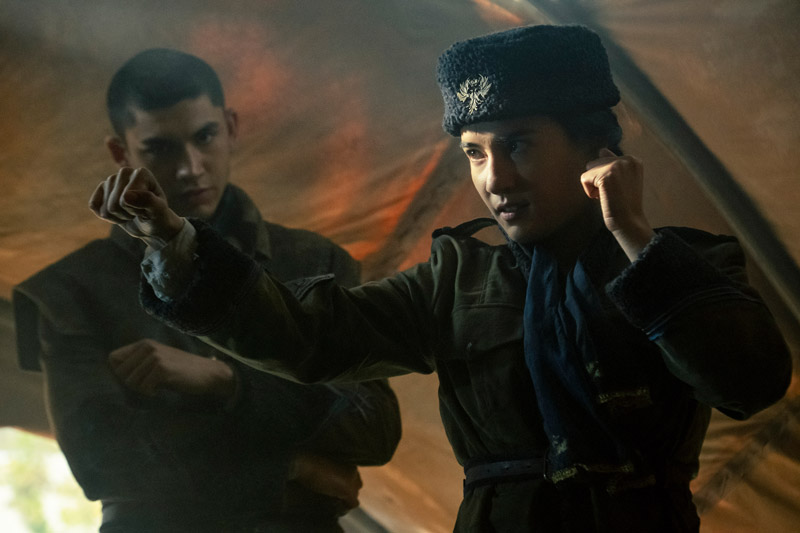 I’m always up for more fantasy and although I wasn’t too impressed with its lead, Shadow and Bone’s great production design, colourful assortment of fun characters and dark, compelling story left me wanting more. Some might have a bone to pick with its ending, given that it doesn’t even try to wrap things up conclusively or hint at what’s to come for these characters - but there’s a lot of potential for the series to become one of Netflix’s flagship offerings in the future. Definitely worth a cosy weekend watch.

Shadow and Bone hits Netflix on 23 April, 2021. Check out our interview with the show's cast!