Review: Mythic Quest Season 2 works so much better when it turns up the drama

Review: Mythic Quest Season 2 works so much better when it turns up the drama 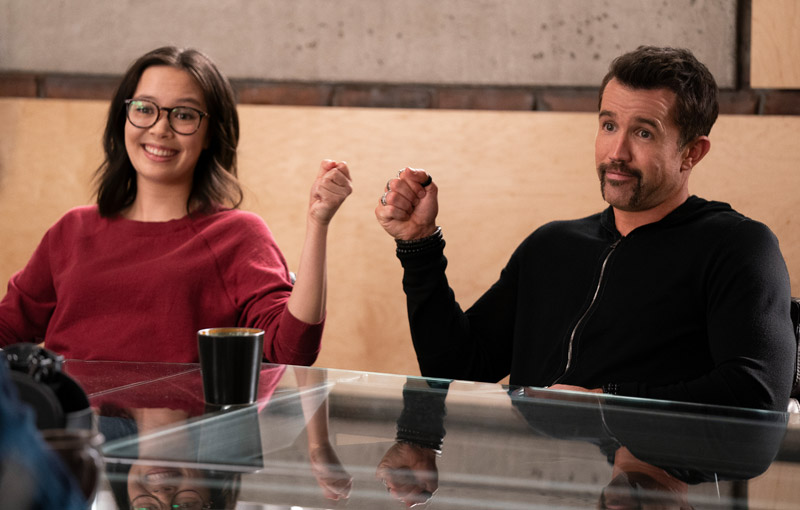 Mythic Quest is back!

Apple TV+’s workplace comedy Mythic Quest is returning on 7 May, 2021 with a whole new season of episodes, and we’ve had the pleasure of watching it all - as if we weren’t going to spend a weekend binging it anyway. This season comes quick on the heels of ‘Everlight’, a special episode released to ensure a smooth transition from the show’s pandemic-themed work-from-home special to a full season with the cast back in their office.

The more things change, the more they stay the same. The crew behind the popular (and fictional) Warcraft-like MMORPG Mythic Quest are still working hard to figure out where the game should go next. Their egotistical leader Ian Grimm has brought on Poppy Li as co-creative director, ensuring that the both of them continue to butt heads about the game - but in a more productive way this time. While last season mostly focused on Ian and Poppy’s storylines together however, this season feels much more diverse in its plotting. Almost every character has time to shine in their own arcs - minus head of community relations Sue Gorgon, who’s still stuck in her basement office far away from the rest of the gang. Poor Sue.

Where does Mythic Quest go next?

At first, Season 2 feels like it's setting up the cast up for the exact same problems they faced in Season 1. Now co-leaders of a game studio that constantly seems to be up in arms over something or the other, Ian and Poppy have to figure out what the next step for Mythic Quest is going to be. It sounds a whole lot like they’re just trying to figure out the game’s next expansion, which was pretty much the basis for Season 1, but this season eventually tilts towards a radically different direction. Surprise, surprise - Ian and Poppy don’t work well together, and the latter in particular has to overcome all sorts of hurdles in her now leadership role. That includes having horrifying sex dreams about Ian.

It feels like this season is built around the theme of power. Poppy was constantly frustrated with Ian back when she was Mythic Quest’s lead engineer, mostly because she couldn’t change the game in all the ways she wanted without cutting through a tremendous amount of red tape and rallying Ian over to her side first. As co-creative director, she finally gets to be the head of a game she’s worked on for ages. Just when she has all the power in the world to build this game according to vision her - she falters. She has no clue where it should go next. 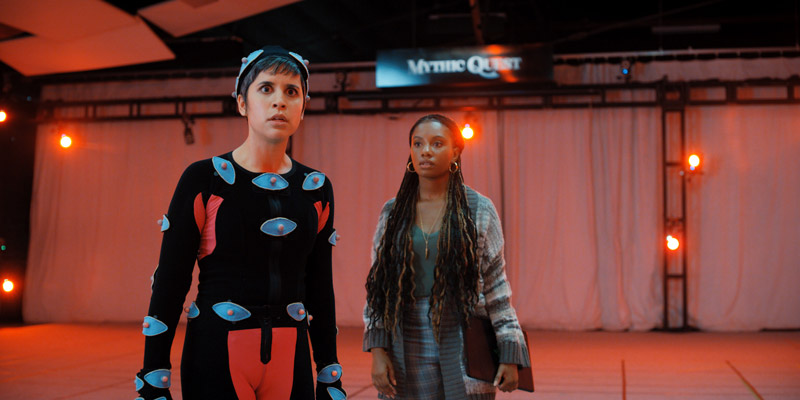 Meanwhile, Dana’s ambitions extend far beyond just being a game tester for Mythic Quest, and Rachel fears being left behind. She often complains that she doesn’t get to have an actual say in the game’s development, but when the opportunity to do so finally falls into her lap, she falters just like Poppy. It’s interesting, the way this season plays out. Jo quits being David’s assistant to go work with Brad Bakshi, and the two make a fun pair - arguably being the most antagonistic members of Mythic Quest’s cast. However, it doesn’t take too long for that relationship to devolve into a battle of power between them too.

We definitely came into this season expecting a much looser structure of ‘Haha, look at Poppy and Ian argue!’ jokes, but the story intersperses thoughtful moments in between all this comedy to keep things grounded, and that works really well, because Mythic Quest just isn’t that funny. It’s got its laugh-out-loud moments, sure, usually tied to David Brittlesbee - the resident butt of every joke. The scenarios these characters end up in are often amusing, like one episode that pairs Rachel with Ian because the latter can’t drive stick. However, we’d be hard-pressed to tell you that we found this season any funnier than the first, and comedy is the one part of this sitcom we hoped would be improved upon the most.

This season’s strongest moments instead come from Mythic Quest’s ability to drop the laughs at a moment’s notice to make way for some of its most heartfelt moments yet. It can get real dark, real fast - but that tonal shift is mostly felt in the back half of the season.

King of the jungle 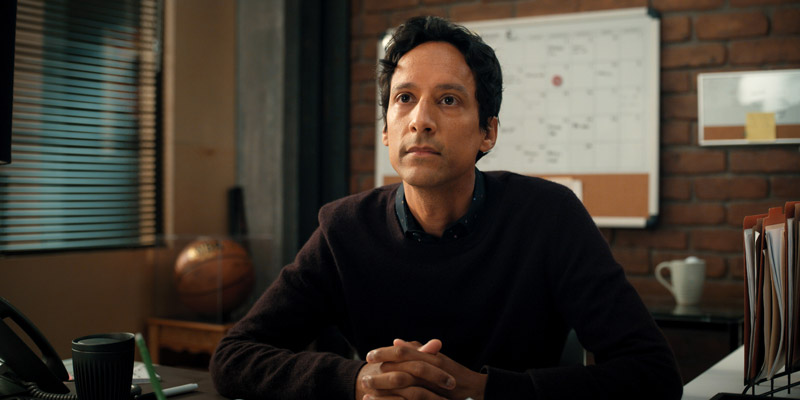 Although Season 2 didn’t improve much on Season 1’s general lack of laughs, it is by no means a step down. In almost every other aspect, the sitcom builds upon the characters it set up in Season 1 to great success. The best example of this is C.W. Longbottom, a character I could only barely tolerate last season. While C.W. only shows up in the first half of this season via laptop screens and video calls, presumably because his actor F. Murray Abraham had to film remotely for a bit (due to Covid-19 restrictions), he really gets his time in the spotlight in the second half.

I’m sure many of us came away from Mythic Quest’s first season with one conclusion: Hot damn, ‘A Dark Quiet Death’ was a great episode of TV. This was a throwback to a time before Mythic Quest, focusing on two game developers trying to make their little horror game work. That episode was so tonally removed from the rest of the series that it should’ve been jarring, but it ended up being the best of the bunch instead. Season 2 has ‘A Dark Quiet Death’ episode too, focusing on C.W.’s origins as a writer.

This episode isn’t nearly as great as the episode it's trying to emulate, but it does a great job of setting C.W. up for an interesting journey across the second half of the season, ultimately making him a much more multifaceted character than he ever was before. Across the board, Mythic Quest’s cast gets so much more to work with this season. The layers of Brad Bakshi begin to peel back when his seemingly wholesome brother pops by the office for a birthday party. Poppy tries her hand at battle royale in an episode that hilariously names Hyper Scape as a ‘mega franchise’ next to Call of Duty and Counter-Strike. You wish, Ubisoft. 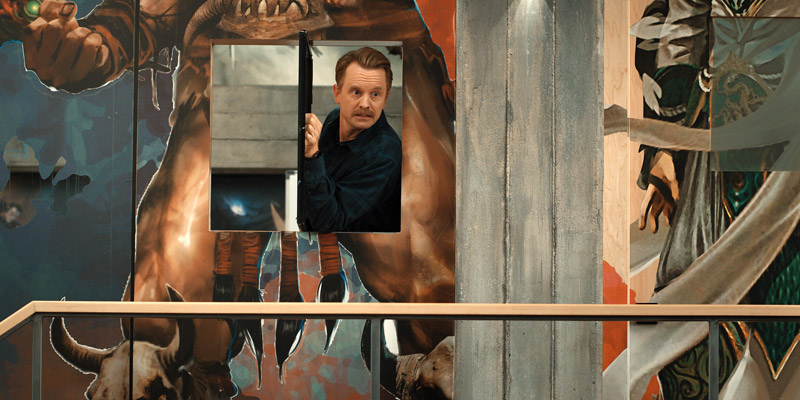 Even Carol from HR gets a really good bottle episode where the entire team argues about what animal they were assigned based on a personality quiz (which must've been nostalgic for Danny Pudi, because Community did something similar in Season 3). This season is plotted in such a way that everyone gets their time to shine - which is fantastic, because Mythic Quest has a phenomenal cast. Rob McElhenney cut his teeth on comedy with the brilliance of It’s Always Sunny in Philadelphia, but he really gets to show off his dramatic-acting chops this season. Ashly Burch (Note: you might recognise her voice as Aloy in Horizon Zero Dawn and as Tiny Tina in Borderlands 3) and Imani Hakim play a couple you really want to root for, though they stumble on early relationship roadblocks. Charlotte Nicdao is just as fantastic as ever as the often-frazzled Poppy, who begins to come apart at the seams with all this new responsibility handed to her.

Mythic Quest Season 2 might not bring the laughs as much as Season 1, but it is an improvement upon its debut season in every other respect. Ian and Poppy’s wrestling match for the fate of Mythic Quest eventually climaxes with an exciting lead-in for Season 3 - and I’d be lying if I told you I wouldn’t binge that in a heartbeat too.