Review: Mythic Quest: Quarantine is a touching portrayal of the #WFH experience

Review: Mythic Quest: Quarantine is a touching portrayal of the #WFH experience The comedy focuses on videogame development, created by the geniuses behind It’s Always Sunny in Philadelphia. Not only that, but it stars Always Sunny’s Rob McElhenney, Community’s Danny Pudi and Horizon Zero Dawn’s Ashly Burch. Suffice it to say, it doesn't take a lot for this show to impress me. But this episode? Wow.

Mythic Quest: Quarantine is a special episode of the show focusing on how the team behind Mythic Quest is faring while working from home. The entire episode was shot, edited and made ready to air during quarantine in three weeks - and having seen it, that is a ridiculously impressive feat. It’s immediately one of the show’s best episodes - only second to Season 1’s A Dark Quiet Death.

Mythic Quest: Quarantine kicks off with hapless Mythic Quest producer Dave Brittlesbee trying his best to pull the team together for a work meeting. Creative director Ian Grimm unsurprisingly shows up in a hot tub, Poppy Li appears unshowered while eating cereal, and C.W. Longbottom has trouble joining the work call in the first place. Admittedly, the tired jokes about C.W. having trouble with technology aren’t this episode’s strongest points.

The episode’s plot threads begin unravelling pretty quickly. Ian and Poppy are both having trouble dealing with their new lives under quarantine. Dave faces off with Brad Bakshi when he suggests that the company should donate to a charity. Dave’s assistant Jo struggles with teaching C.W. how video calls work. Game testers Dana and Rachel are having fun playing Mythic Quest from home, only to be interrupted by the all-around unpleasant Lou.

How’d they even manage this? I feared that this episode would solely use video calls as a narrative device like the recent Parks and Recreation special episode, but as long as characters have a screen in front of them, the show finds a way to weave them into the story. In fact, the way this manages to pack in just about every member of the main cast in a 30-minute runtime is really impressive. The story flits from one character to the next, rarely missing a beat.

In an interview with The Hollywood Reporter, co-creator Megan Ganz mentioned that the idea for the episode was partly born out of a need to acknowledge the ongoing pandemic, without having Season 2 focus on it entirely. The creative team nailed it on that one, producing an incredibly timely episode that we can all (hopefully) look back on one day, as a window into what things were like when lockdowns were still in full force. 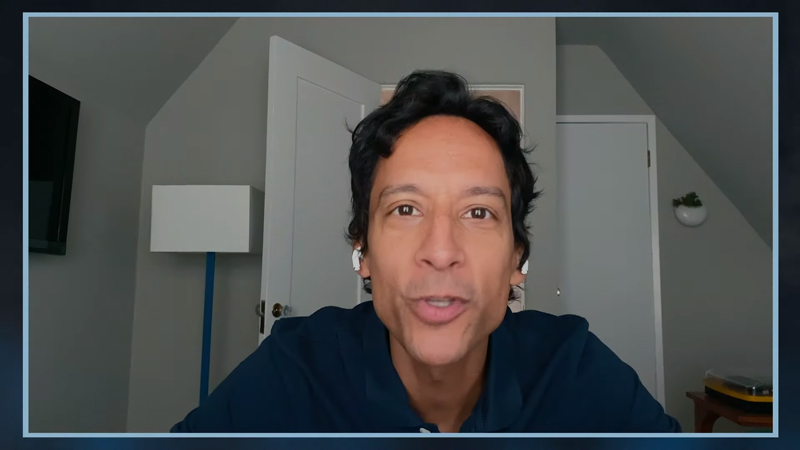 Mythic Quest: Quarantine isn’t just an episode centred around gimmick-y storytelling, however. It actually pushes the plot forward a little. For example, the team finds themselves in the awkward position of having to undo a horribly-timed in-game event that was meant to save Mythic Quest. "Releasing a disease into the game right before a global pandemic was not a great look,” Dave states dryly.

At the same time, it's smart enough to take advantage of its extraordinary format - producing an ending sequence that will have you muttering, "But... how did they even choreograph that?" The ongoing pandemic has forced multiple TV and film productions to think outside of the box. Parks and Recreation reunited its cast after spending five years off the air for a special episode. The Blacklist recently had to animate parts of its season finale that hadn't been shot yet - and you know what? Kudos to them for trying, but yikes.

Mythic Quest: Quarantine is an episode of the show that wouldn’t exist at all, were it not for the current state of the world. It’s a reflection on what everyone has to deal with right now - hellish work meetings, loneliness due to isolation and the general pains of adjusting to working from home.

Somehow, it touches on all these themes without forgetting that it’s also a comedy - making light of the situation without ever coming off as obtuse. Peppered with jokes, it eventually swerves into a deeply poignant climax, reminding us that there’s comfort in the fact that we’re all in this together.

I won’t say that this is the show’s best episode (again, that’s A Dark Quiet Death). What I will say is that McElhenney and company felt confident enough to submit Mythic Quest: Quarantine for Emmy consideration - and I think they have a real shot at winning.

Mythic Quest: Quarantine will premiere  on May 22, on Apple TV+.