Doctor Who: Revolution of the Daleks has more than one tearful goodbye

Doctor Who: Revolution of the Daleks has more than one tearful goodbye The Doctor will need a lot more than her Sonic Screwdriver to get out of this one.

It’s going to take a very long time for Doctor Who to return with a brand-new season, even if it comes three episodes short due to the pandemic. Until then however, we do have the show’s New Year special episode: Revolution of the Daleks. Despite what you might think however, this isn’t some one-off, missable adventure through time and space. It’s critical to wrapping up big reveals from the previous season, and setting up the Doctor’s story going forward.

There’s a lot to dissect here, especially when you toss in how shaky showrunner Chris Chibnall’s time on the series has been, and the fact that next season might be the Thirteenth Doctor’s last. For now however, Revolution of the Daleks is a solid followup to the massive implications of last season's cliffhanger finale, packed with enough nostalgia to satisfy older fans and character drama for the newer ones.

Time and Relative Dimensions in Space Revolution of the Daleks is essentially a short movie that follows up on Doctor Who Season 12’s big finale reveal: the Doctor is the Timeless Child of legend, a being capable of infinitely regenerating into new forms every time they died. In addition to that, the race of Time Lords she thought she belonged to had grafted her regeneration abilities onto themselves. Now, the Doctor doesn’t even know how old she is. She doesn't know where she came from. She barely even knows who she is.

As if the Doctor wasn’t dealing with enough, she also got arrested by the Judoon (space police) for war crimes, and sentenced to prison time in an asteroid - an impossible distance away from her Sonic Screwdriver, TARDIS and friends. This finale aired all the way back in March 2020, which gave us almost as much time to stew on its implications as the Doctor spent in space prison. Chibnall basically retconned huge chunks of Doctor Who’s lore, and none of us were really sure about what it meant yet. It was really nice to see something this bold come out of the show, at least - even if it felt like total sci-fi nonsense.

Unfortunately, this special doesn’t move that particular storyline forward in a meaningful way, which might be disappointing for fans who were expecting closure. The Master doesn’t return, despite being the main villain of last season. Revolution of the Daleks is all about restoring the status quo, which would be the Doctor getting out of prison, getting her TARDIS, and rejoining her companions.

The Daleks are back, again 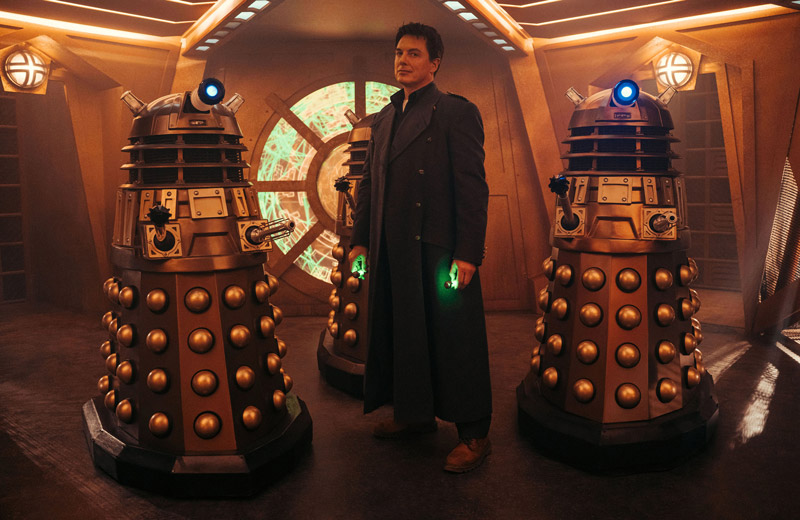 Revolution of the Daleks begin with the UK government conspiring to do something incredibly stupid: reverse engineering leftover Daleks from the episode ‘Resolution’. This time, a slimy businessman - Jack Robertson - is trying to turn them into ‘security droids’ in collaboration with a government official. Sidenote: after the many, many Dalek invasions Earth has gone through by now, why are they still so damn sloppy with these things? Sure, they might look like trash bins from outer space with selfie sticks, but those selfie sticks can turn you to dust. Why are we still trying to mess with these things?

Ah, but without idiots, we wouldn’t have a plot. While Daleks are being resurrected by morons, the Doctor’s space-faring companions, Ryan, Graham and Yaz are readjusting to life back on earth. It’s been almost a year since they were dumped back on their home planet, and the Doctor hasn’t appeared since. Graham has always been happy to go where Ryan wants to go, and Ryan is living a full life back home, so the two of them have been getting along nicely. Yaz is the opposite unfortunately, desperately searching for any sign of the Doctor’s reappearance.

As the three companions meet up, Graham brings up a video that’s just gone viral: the redesigned black-and-silver Daleks acting as security, pacifying political protestors using water jets in the place of police. Several opportunities for real-world political commentary come up here, but Doctor Who disappointingly doesn’t commit to them. As the group rushes over to investigate, the Doctor once again runs into Captain Jack Harkness (a delightful John Barrowman, returning to an iconic role), who’s come to break her out of prison.

I won’t spoil the rest of the special, but it’s safe to say that it wastes very little time getting the Doctor back to her companions, before setting Daleks on them.

The good, the bad and the Dalek Much like the rest of Chibnall’s run on Doctor Who, this special is a real mixed bag. For one, Revolution of the Daleks improves on the previous season by introducing proper character drama into the ‘Fam’s’ group dynamic. Ryan spends a lot of time awkwardly tip-toeing around the fact that he wants to leave the Doctor and stay on Earth, and of course, she’s shocked by the news. Yaz is straight up mad at the Doctor, as she’s abandoned her for eight months. Not really comparable to the decades the Doctor spent in prison, but we’ll give her a pass.

The special sees two of these companions depart: Ryan and Graham, and I can’t help but feel like their presence on the show was such a massive waste of potential. Ryan was never given anything to work with as a character, and thus never stood out from the group in a meaningful way. I'd be lying if I said I was sad to see him go. Graham was nice in an ‘old grandpa’ kind of way, and he had a sweet backstory regarding his late wife - but he didn’t do much in this special either. Their farewells don’t come with a lot of pomp and circumstance. Ryan basically just goes, “I have to leave,” and Graham says, “I’ll go with you,” and that’s the end of that. It’s absolutely incomparable to the departure of previous companions in the series, like Amy and Rory, or Clara, all of whom broke our hearts on their way out. Then again, Ryan and Graham fall so far beneath those three in terms of likability, that their leaving was never going to leave a lasting impact in the first place. It’s fantastic to see John Barrowman return as Jack Harkness, after disappearing from the series for the last decade. His absence always felt strange, considering how important Harkness was to the Doctor. Barrowman turns Harkness back on almost effortlessly, slipping right back into old habits of flirting with everyone he sees and making jokes when things get tense.

The Daleks’ return doesn’t feel as joyful however, and it simply doesn’t compare to Dalek stories of the past. There’s this whole mutation plotline going on which feels silly and contrived, but it does introduce some impressive action scenes and a climactic finale that feels worthy of the long wait. I maintain that Jodie Whittaker is a fantastic Doctor, but she just hasn’t been given good enough material to work with. Beyond that, she hasn’t gotten a properly iconic story. The Tenth Doctor got Blink, Eleven got Vincent and the Doctor, and Twelve got Heaven Sent. Nothing Chibnall has produced for Thirteen has come remotely close to any of those episodes, and that certainly includes this special.

The Doctor goes through an identity crisis in Revolution of the Daleks, second-guessing herself due to the upsetting nature of her origins. She eventually comes around to saying that none of it matters, because she is the Doctor and nothing can change that. However, it feels like a strange place to get to in such a short amount of time, especially when next season is bound to flip her big eureka moment on its head. Why not let the Doctor stew on this for a while? Why not let her, for just a couple more episodes, be something more than peppy and high-spirited? Revolution of the Daleks is a solid step in the right direction for Doctor Who, but it comes too late for two of its castmembers. Ryan and Graham’s leaving feels like much ado about nothing, especially since the former has been disappointingly wooden for two seasons in a row. Older fans of the series will find a lot of nostalgia in the return of Jack Harkness, a couple of familiar name-drops and the reappearance of certain villains. The Doctor herself goes through a lot of abrupt change very quickly, and hopefully next season, she gets more time to actually deal with it.