Resident Evil Village Impressions: This game is shaping up to be something great

Resident Evil Village impressions: This game is shaping up to be something great 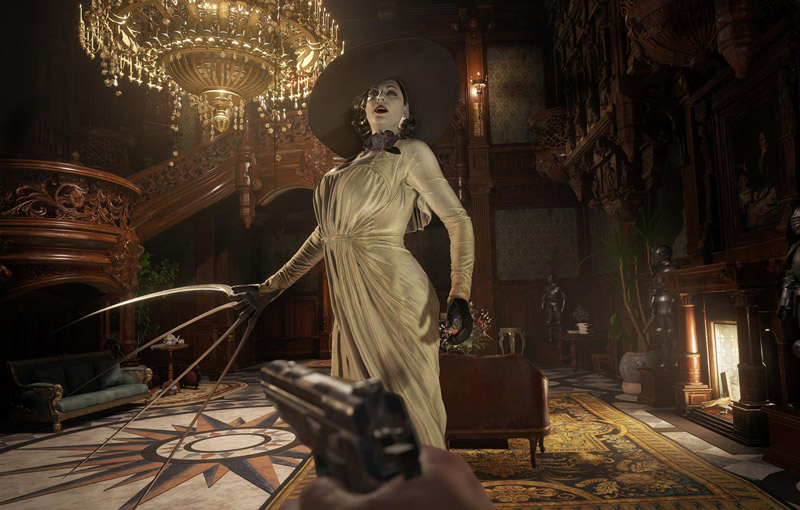 Capcom opened up Resident Evil Village’s doors to PlayStation console owners last weekend, with a new limited-time demo that let them explore the titular village for 30 minutes or less. Being the hugely impatient Resident Evil fan that I am, I blazed through the whole thing out of fear that the 30-minute time limit might cut me off. Fortunately, I completed it with three minutes to spare - though I now wish I’d spent those few minutes examining this village for more clues.

This demo was very different from Capcom’s last PlayStation 5 demo Maiden, which functioned more like a spooky virtual haunted house to give players a taste of this game’s atmosphere and visuals. Most of the stuff I played through took place outdoors in a deserted snowy village, meaning that I never ran into any tall vampire ladies nor did I step foot in any castles. I played through a rather cutscene-heavy segment, which introduced a new cast of characters before things went south… violently.

How dare you give me a shotgun with just one shell 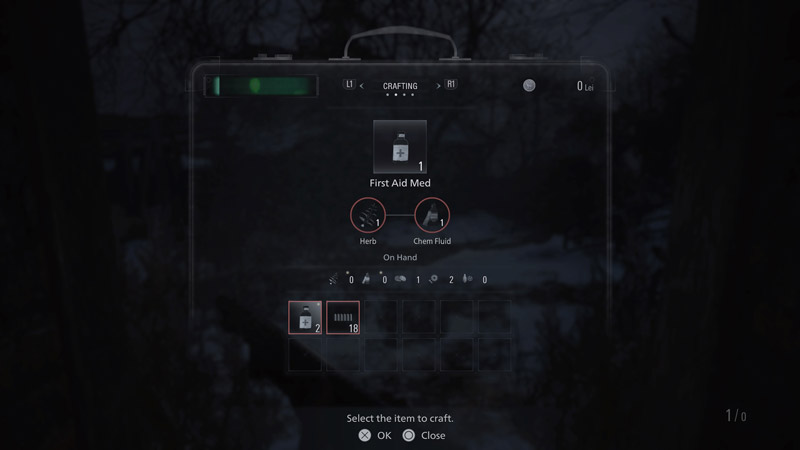 The demo begins with an old witchy woman speaking in ominous riddles, as most game demos do. I didn’t get much context on Ethan’s presence in this village, besides the fact that he’s looking for his missing daughter Rose. I entered the village soon after, and boy was it giving off Resident Evil 4 vibes. Just like Resident Evil 7 seemed to look to the first Spencer Mansion-set game for inspiration, this game has Resident Evil 4 painted all over it. A creepy village out in the middle of nowhere, with religious populace and a distant ringing bell? Check. A tall Gothic castle? Check. Villagers who have been turned into monsters wielding weapons? Check. I say this with nothing but love: Village is just Resident Evil 4 with vampires.

I do love the look of this village, though. There’s a slight fog hanging in the air as you trudge through mud and snow, looking for signs of life where that might be none. This eerie atmosphere is all very Silent Hill, but Ethan’s horrors manifest in much more physical ways. After a bit of poking and prodding around, I stumbled onto a field of shoulder-high tall grass wafting about in a slight breeze, with a tantalising item crate positioned inside. Clearly, the game wanted me to go in - but I’ve seen enough Supernatural cold opens to know what a bad idea that would be.

Instead, I backtracked and ended up finding my way into an abandoned home, where I discovered a couple of interesting things. The first is that the game has a barricading system for these houses, allowing Ethan to block entrances and windows by pushing around shelves. This suggests that we’re in for some tense home invasion scenarios later in the game. When I rooted around cupboards and shelves for goodies, I also found some gunpowder to craft bullets with - which is standard Resident Evil fare. Unlike the recent remakes however, there’s a dedicated menu for the crafting system now. You can view recipes and see exactly what you’re making. It’s a nice little upgrade from glancing at my notes every half-hour to see what ‘white gunpowder’ becomes when it’s combined with ‘yellow gunpowder’. 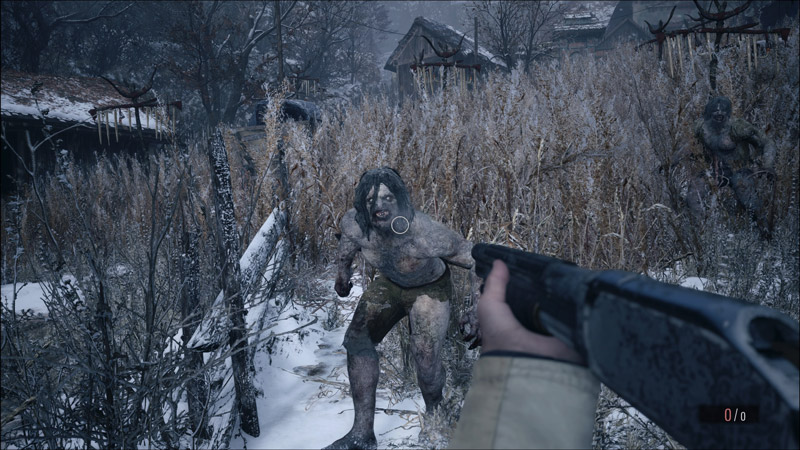 After that, I found something that made me very happy: a shotgun! Alas, it only had one bullet - but it was still a  better comfort than the flimsy pistol Ethan carried around. I also found a little landmine that could be placed down on the ground. Further proof that these houses would soon teem with undead life. After I was satisfied with all this poking around, I went into the dreaded tall grass and, as expected, began to hear loud howling noises. Three Lycans (werewolf-like creatures) popped out of the grass to greet me with sharp claws and bared fangs and I’ve got to say, these are some pretty intimidating enemies. Just like the remakes' zombies, they’re real bullet sponges - but they’re a lot less lethargic in combat. They swooped under my bullets while brandishing shovels and when I didn’t manage to press the ‘Guard’ button in time, launched themselves forward to give me an unwanted and very painful hickey.

This was the only combat scenario available to me in the entire demo, but it was a good indicator of how dangerous these monsters are. In the early hours when Ethan’s arsenal is limited, these Lycans can easily dispatch you with a couple hits - but they’re a lot more interesting to fight than the boring Molded enemies from Resident Evil 7. It was an exhilarating fight, but I had to remind myself that these would likely end up being the weakest enemies in the game, and the worst was yet to come.

Ethan’s sick of this *bleep* 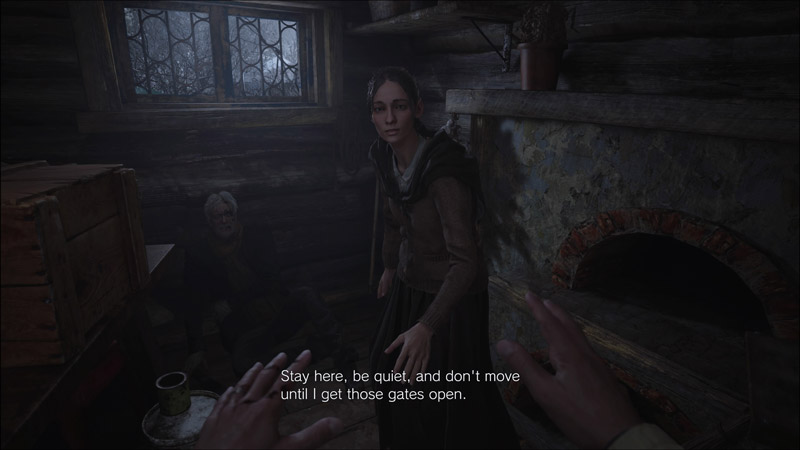 This segment of Resident Evil Village felt a lot like exploring the Baker family’s house for the first time in Resident Evil 7. There are a lot of locked doors and boxes that will undoubtedly become accessible later on in the game, offering access to new areas as Ethan wanders about looking for Rose. Unlike Resident Evil 7 however, I ran into some actual humans here! After finding a young woman and her sickly father, I escorted the duo into a safehouse owned by a rather kind lady.

Inside, I found a surprising assortment of human survivors - to the point I started to wonder: Is this the most cutscene-heavy Resident Evil game I have ever played? I don’t remember seeing so many human characters interacting with one another all in one place before. It seemed like the main cast of characters was shaping up nicely, and I was really excited to start learning about their histories, their personalities and what exactly was up with this spooky village. And then, of course, it all went to hell. 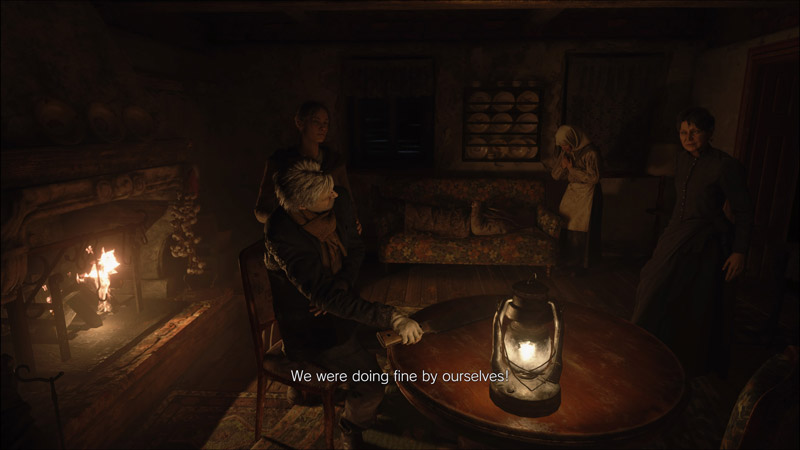 To cut a long story short for the sake of spoilers, Ethan ended up being alone again and frustrated that, “This keeps happening,” which was an interesting note for him to make. I wonder if this version of Ethan has become emotionally beaten down due to all the bloodshed and horrors he had to endure in Resident Evil 7 - not the least of which was getting his arm lopped off. He seems to comment on his surroundings more, and generally have a more present personality during gameplay, which I really liked.

One of my biggest criticisms with Resident Evil 7 was its rather bland protagonist. To be fair, that was the point of Ethan Winters, but after playing as Jill Valentine in Resident Evil 3 and realising how much worse that game would’ve been without her badassery, going back to Ethan seemed like a downgrade. I don’t feel that way anymore. This version of Ethan has a lot of potential, and I sure hope the rest of the game lives up to it. 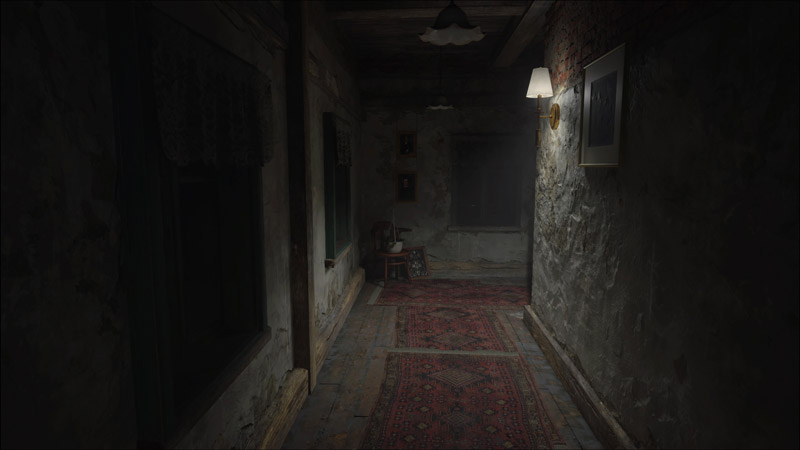 I couldn’t be more excited for Resident Evil Village, and this demo has done very little to whet my appetite. I need more! The shift to Gothic-European architecture with a winter theme has brought a special cosiness to this Resident Evil game, which is a breath of fresh air after so much time spent in Raccoon City lately. The PlayStation 5’s visuals were fantastic, though I was particularly impressed by the RE Engine’s atmospheric lighting when ray tracing was turned on. Exterior environments aren’t the generational leap one might expect - there were still some flat-looking snow textures and such - but the interiors of these houses looked breathtakingly lifelike sometimes.

In summary: it’s pretty, has some nifty quality-of-life upgrades and the new enemies are terrifying. I can’t wait!

Resident Evil Village launches on 7 May, 2021. Stay tuned for our review and check out our coverage of the recent Resident Evil Showcase for details on its next demo.