Recently, we took a look at custom designed Radeon HD 5850 cards, now, we are focusing our sights on its more powerful compatriot, the Radeon HD 5870.

Launched in September last year, the Radeon HD 5870 was the world's first DirectX 11 compatible graphics card and also the fastest GPU of its time. It was markedly faster than its predecessor and was capable of pounding the uber-quick GeForce GTX 285 into submission. In fact, the only card that was capable of going toe to toe with it was the dual-GPU GeForce GTX 295, which is more costly and power hungry. All in all, we were exceptionally pleased with the Radeon HD 5870.

Even now, the Radeon HD 5870 remains to be ATI's flagship single GPU card, and continues to maintain its popularity amongst enthusiasts thanks to its unbeatable combination of performance, efficiency and relative affordability (against the GeForce GTX 480, at least). 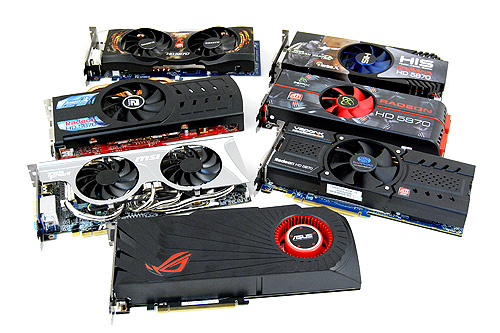 To improve on the already capable Radeon HD 5870, vendors and partners of ATI are coming up with custom designed versions of the Radeon HD 5870. Often, these cards are factory overclock and boast customized cooling solutions to enhance the Radeon HD 5870's performance and efficiency.

Users looking to upgrade to a Radeon HD 5870 will be spoilt for choices, so to help you make your decision, we are rounding up the top models from the biggest names in the market. Here are our contenders for today's roundup: