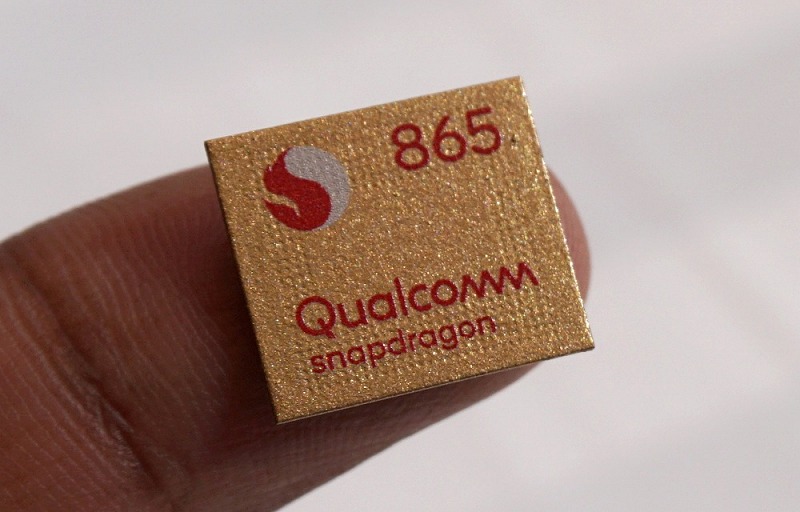 Note: This story is still developing.

The pacesetter for new experiences

On the outset, the new Snapdragon 865 just seems like any other flagship mobile processor that Qualcomm has produced in recent years, only faster, more efficiently designed and sprinkling some marketing features to capture people’s attention – almost as if the product was thought about in the last six months.

That, however, is far from the reality as the Qualcomm Snapdragon 865 was three years in the making from the time design requirements and initial planning began, along with the intended feature set that was developed in stages all through the years as this timeline shows. 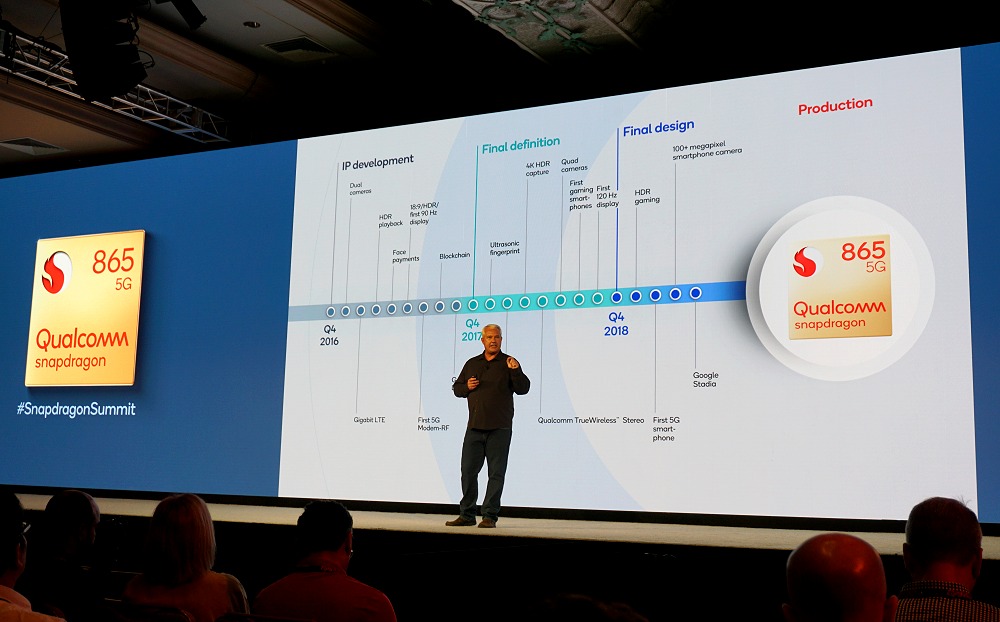 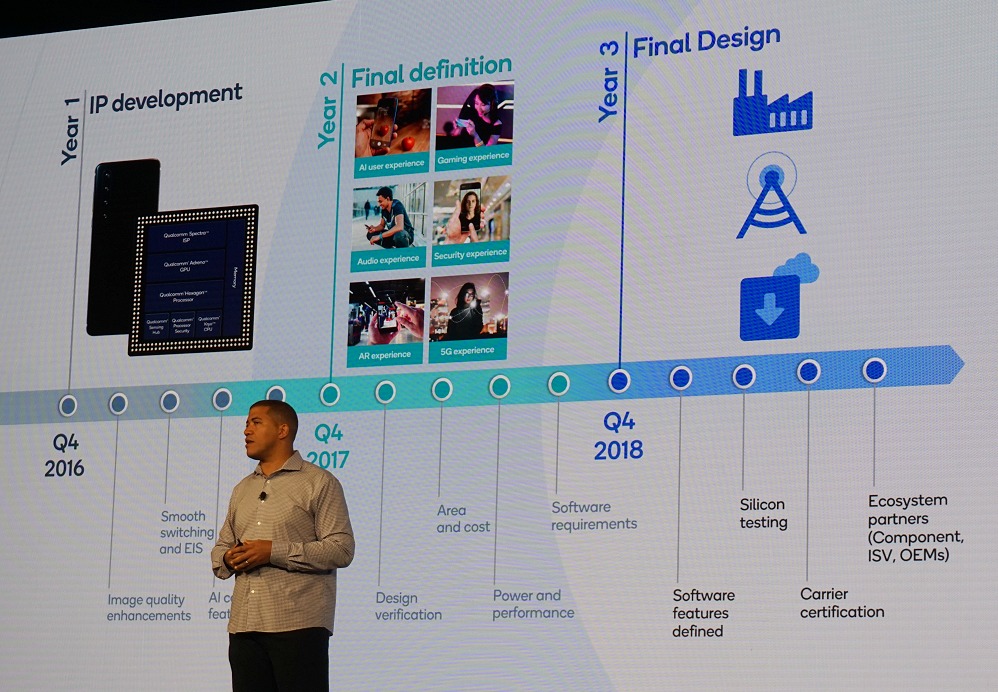 The Qualcomm Snapdragon 855 and 855 Plus are by no means old or slow and are still very powerful candidates for a flagship mobile processor that should easily handle 5G, AI, XR and gaming needs of the near term, the new Snapdragon 865 is taking It up a notch and preparing itself for even newer experiences that have yet to come about and help bring the cloud ever closer to the device with vastly improved AI capabilities along with 5G, a new age imaging processor to tackle the ever-growing media consumption and creation needs and deliver gaming like you’ve never experienced on a mobile device. 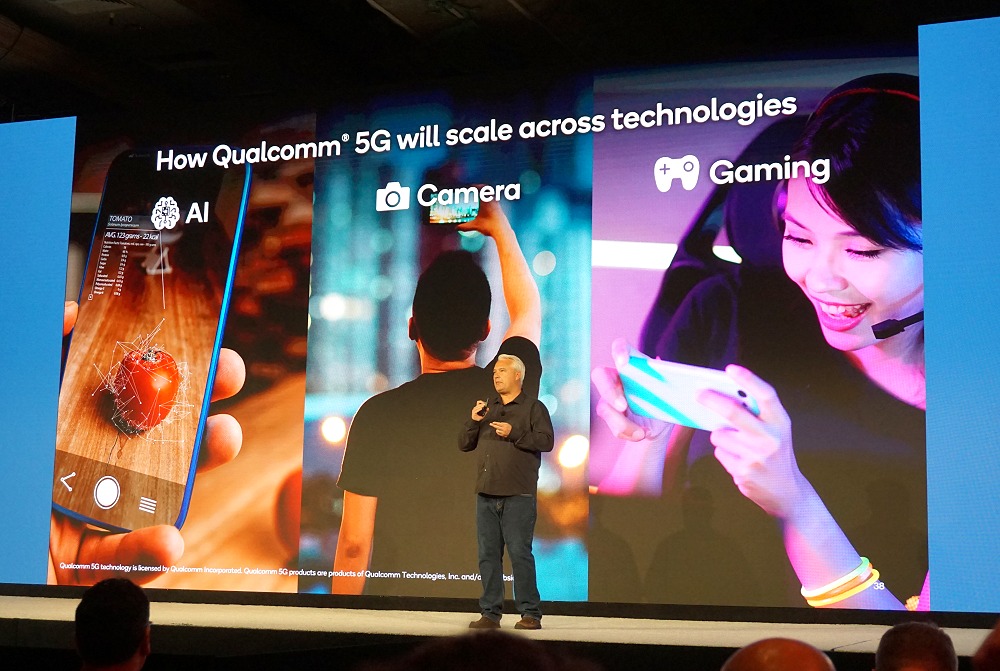 But before we dive in, we’ll begin with going through all the main blocks that make up the new Snapdragon 865 and what exactly has been improved. Note that the Snapdragon 865 is still manufactured on a 7nm process technology, albeit it’s using a newer “N7P” node. 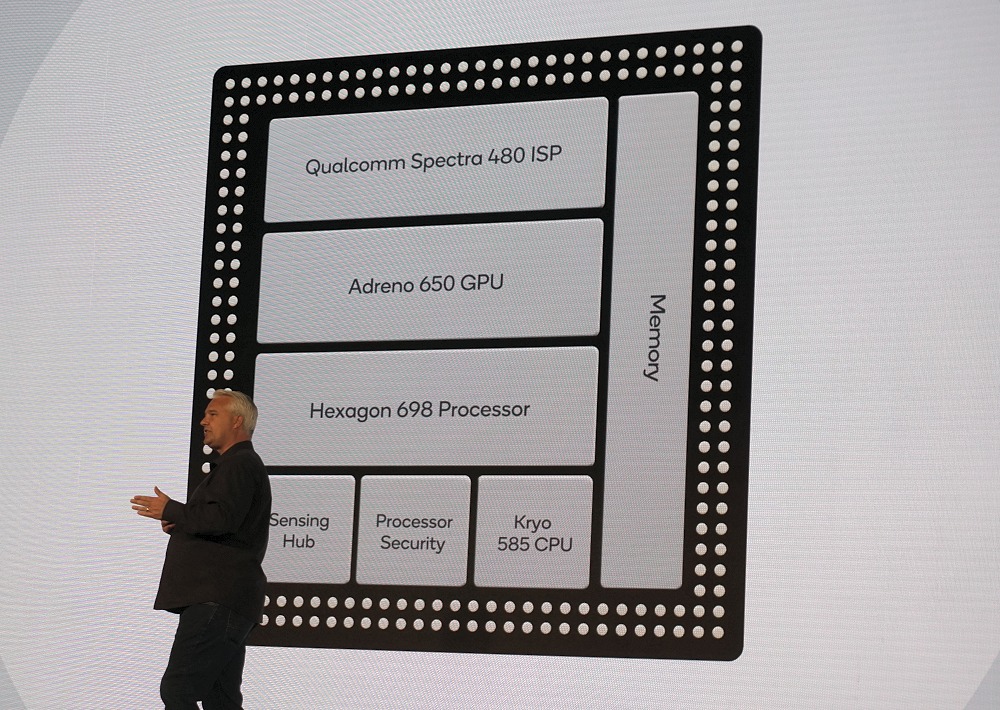 If you compare the Snapdragon 865 platform block diagram above against any others before it, such as the Snapdragon 855 or even the just-released Snapdragon 765, there’s one block that’s completely missing from the new Snapdragon 685. Managed to guess it yet?

That’s right – it’s missing the entire Connectivity block! Unlike the Snapdragon 855 which still had an integrated LTE modem and wireless connectivity components, the new Snapdragon 865 has none of these. 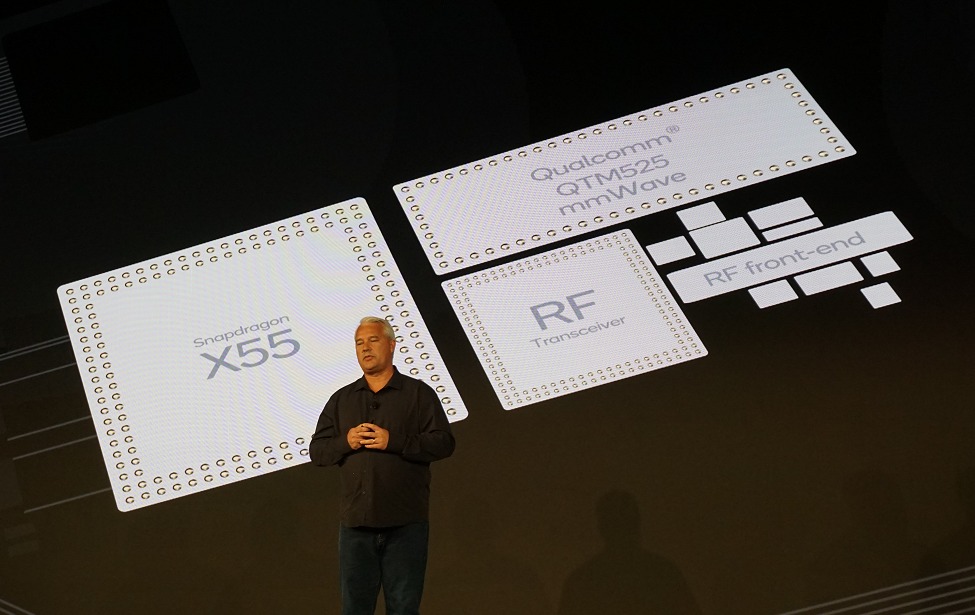 Instead, it solely relies on being paired with Qualcomm’s second-generation 5G modem – Snapdragon X55 5G Modem-RF (radio frequency) system, which combines the 5G modem, RF transceiver and RF front-end unit. This supports all the common frequencies and operating spectrums/modes that are common for 5G connectivity today and this include mmWave, Sub-6GHz, TDD, FDD, Non-Standalone (NSA) and Standalone (SA) to deliver up to 7Gbps downlink throughput. This same Snapdragon X55 also supports 4G LTE Cat 22, 1024-QAM, 5G/4G spectrum sharing (DSS), envelope tracking and antenna tuning. In short, this is a single-chip full-fledged RF system. 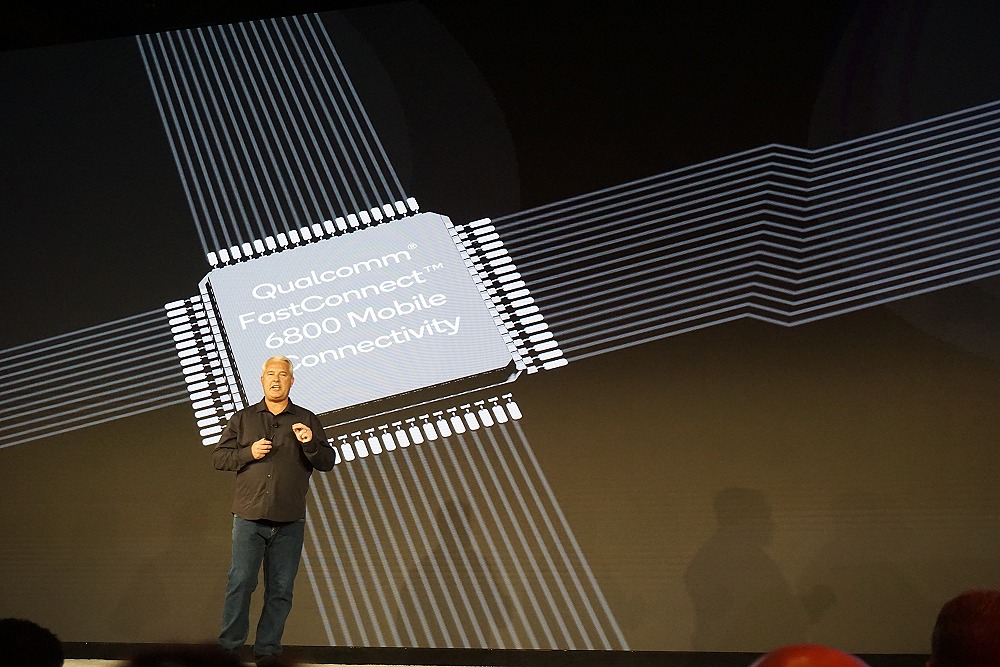 While it doesn’t mandate a QTM525 mmWave antenna module to be mandatory (because this is highly vendor, telco and operating landscape dependent for deployment possibility), it does get paired with Qualcomm’s FastConnect 6800 subsystem to support up to Wi-Fi 6, including 802.11ac Wave 2, MU-MIMO and DBS (dual-band simultaneous). This same subsystem is also responsible for Bluetooth and it supports version 5.1 and Bluetooth audio standards such as Qualcomm aptX Adaptive audio and Qualcomm TrueWireless technology. 60GHz Wi-Fi standard 802.11ay is also present, as with ambient Wi-Fi sensing and 10Gbps peak throughput speeds. FastConnect 6800 is also among the first to be designated Wi-Fi CERTIFIED 6 by the Wi-Fi Alliance.

So it seems like whether you like it or not, you’ll have 5G with your Snapdragon 865 based device, and this also goes on to support one of Qualcomm’s popular statement during the tech summit – The best 4G phone will increasingly be the best 5G phone. 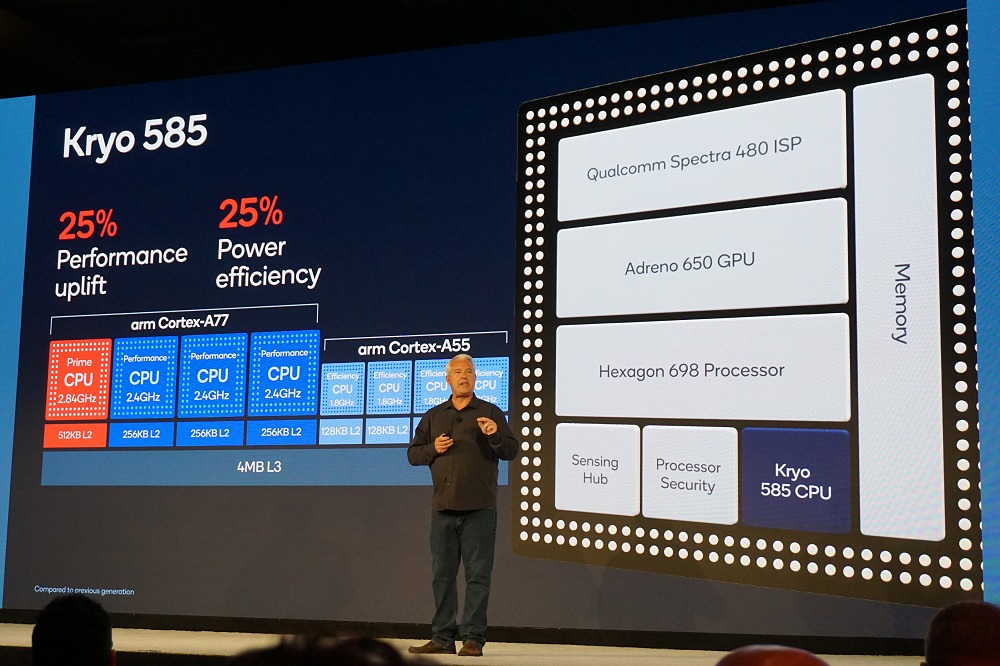 The new Kyro 585 CPU seems to suggest a major jump in performance as the Snapdragon 855’s CPU is labelled as Kyro 485. However, much of the core configuration remains quite similar to its predecessor with the same single Prime core, three Performance cores, and four Efficiency cores; even the clock speeds are identical at 2.84GHz, 2.4GHz and 1.8GHz respectively. The main difference, however, comes from the use of the newer ARM Cortex A77 core model for the Prime and Performance cores, while the Efficiency cores still use the ARM Cortex-A55 design. Additionally, there’s more overall cache for the CPU cores than in the previous generation flagship and the combined changes give the Kyro 585 about similar gains boasted year-on-year of 25% performance uplift and is also 25% more efficient. 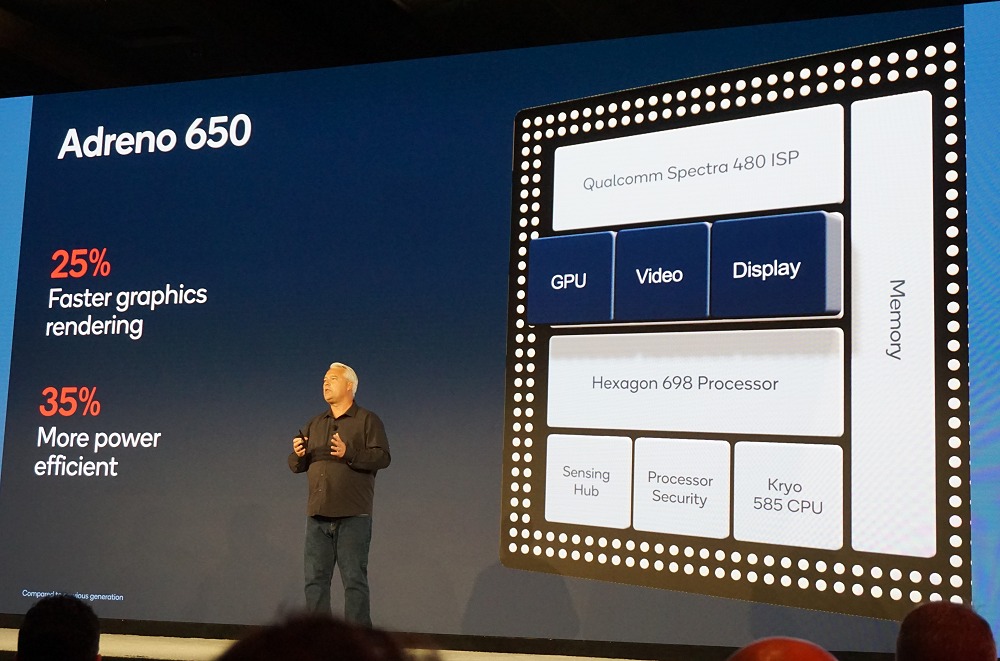 Equipped with the new Adreno 650 GPU, it now supports 16-bit and 32-bit FP instructions, 2x higher total operations per second and new AI mixed prevision instructions. All this makes its 25% speedier and up to 35% more power-efficient than the Snapdragon 855. On the display output side of things, it now supports a 144Hz refresh rate at screen resolutions up to QHD+. At 4K resolution, it can only support a 60Hz refresh, but we’re not complaining as 4K screens are rare for a mobile device and can’t be appreciated.

How does all this translate to gaming experiences? We’ll touch on that later in the article. 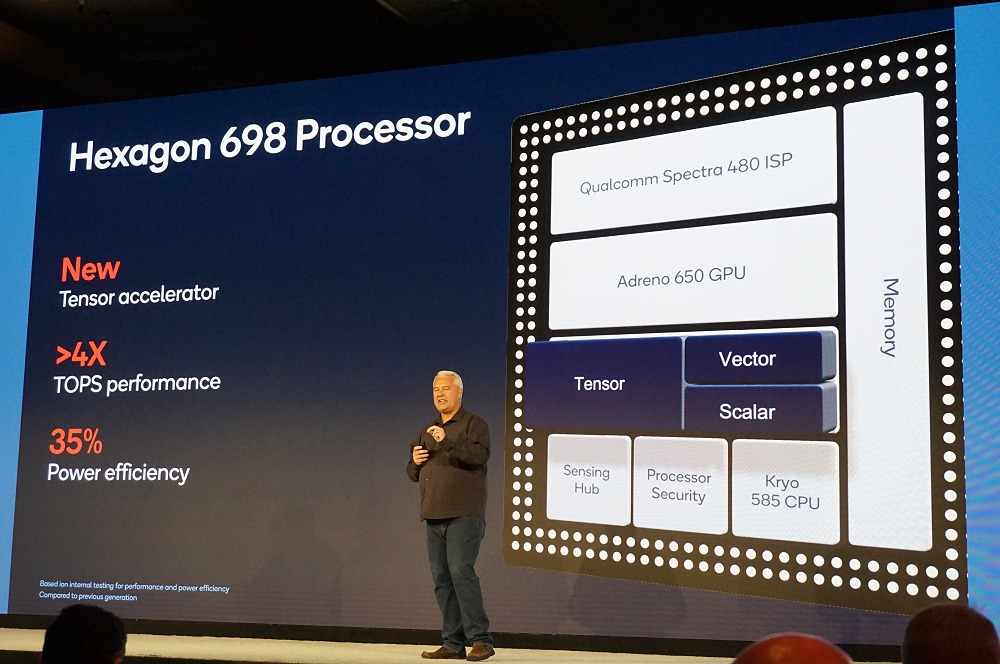 Among the most important blocks for the new Snapdragon 865 is its new Hexagon 698 DSP, which takes the brunt of AI acceleration with upgraded Tensor accelerator resulting in over four times the total operations per second (TOPS) performance, and improved Vector and scalar accelerators. Interestingly, it’s also 35% more power-efficient than its predecessor; perhaps the re-engineering updates and the updated process technology contributed greatly.

Stay tuned as we update the story for more details and experience that the Snapdragon 865 can deliver.

Meanwhile, here are some top-level highlights while we get more updates from Qualcomm and update the story:- 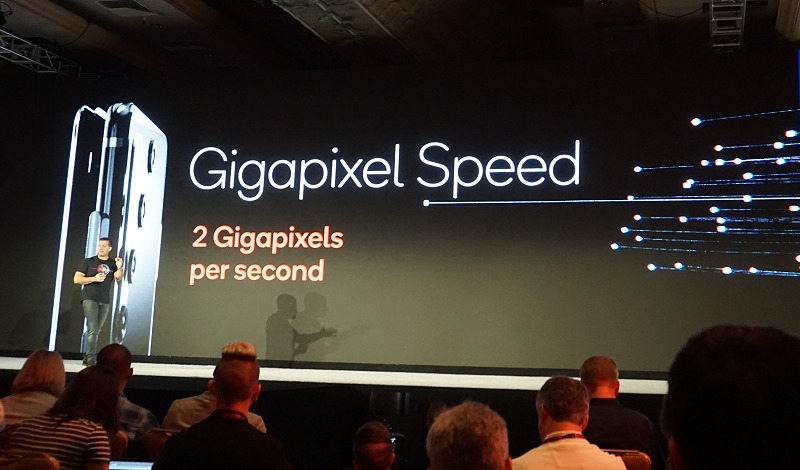 The Snapdragon 865’s ISP operates at staggering speeds of up to 2 gigapixels per second and provides brand-new camera features and capabilities. You can capture in 4K HDR with over a billion shades of colour, capture 8K video, or snap massive 200-megapixel photos. for the first time ever on a mobile platform, Dolby Vision for video capture creates brilliant HDR footage that’s primed and ready for the big screen. In tandem with the 5th generation Qualcomm AI Engine, the gigapixel speed ISP can quickly and intelligently identify different backgrounds, people, and objects, so they can be treated individually for a truly customized photo. 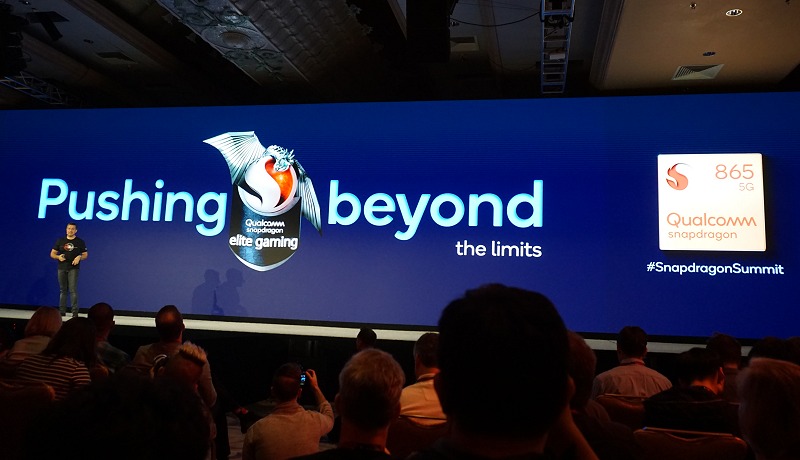 For the first time ever on a mobile platform, Dolby Vision for video capture creates brilliant HDR footage that’s primed and ready for the big screen. In tandem with the 5th generation Qualcomm AI Engine, the gigapixel speed ISP can quickly and intelligently identify different backgrounds, people, and objects, so they can be treated individually for a truly customized photo.

With a first-to-mobile feature, Adreno Updateable GPU Drivers can be downloaded directly from an app store when made available by OEMs, which allows players to have control over their graphics driver updates and GPU settings for their top games.

Note: This story is still developing and will be updated later with more details.