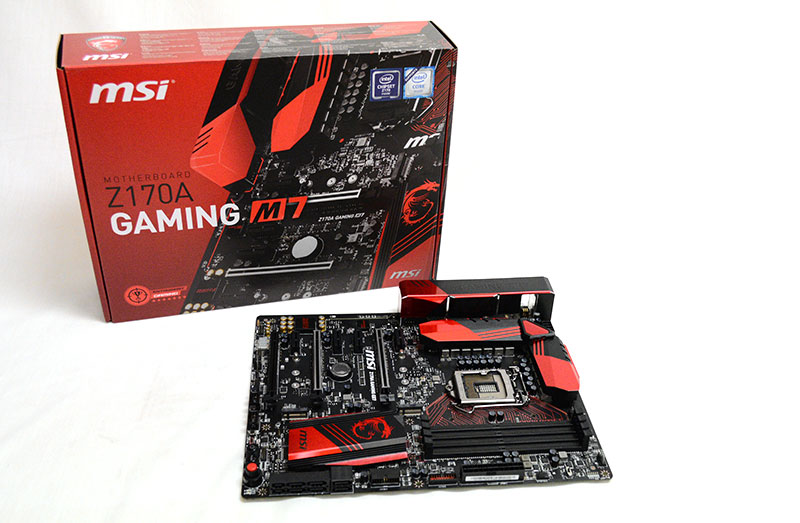 Intel’s new Z170 chipset brings a lot of new features over its Z97 predecessor like support for DDR4 memory and native support for Turbo M.2 speeds of up to 32Gbps. To that end, MSI has prepared a full line-up of Intel Z170 motherboards that will support Intel’s latest Skylake processors. We’ll be taking a closer look at the currently available MSI Z170A Gaming M7 motherboard to give you an overview of the new features you can expect from MSI’s latest motherboards.

Compared to last year’s Z97A Gaming 7, the Z170A Gaming M7 sports some aesthetic differences. The red-and-black color scheme has been carried over, but the rear I/O area is now shielded by a stylized metallic shroud. The area of the PCB between the four RAM slots and the CPU socket also feature red traces for quite a striking look. 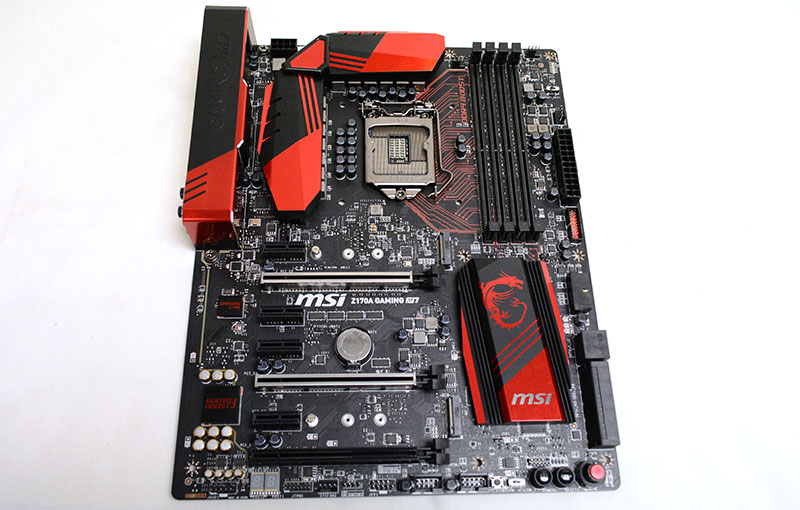 In fact, the red traces aren’t just for show. The board has a new feature called DDR4 Boost, which MSI says isolates the memory circuitry from other components in order to retain a cleaner memory signal for greater stability. This is similar to what we’ve seen MSI and other motherboard manufacturers do with their audio circuitry, and it looks like the same principles apply here. 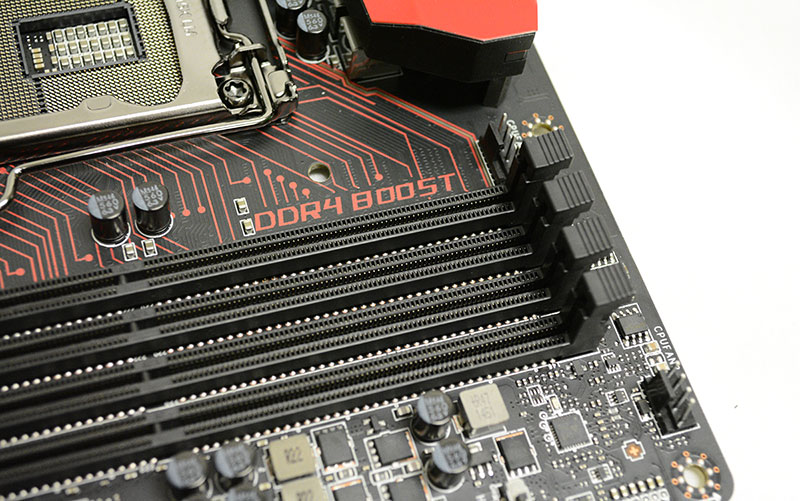 The audio circuitry has also been upgraded over the previous generation. MSI’s Audio Boost 3 now features the Nahimic Audio Enhancer technology that we saw on some of its notebooks at Computex 2015. In addition, the dual OPA1652 AMPs feature completely independent circuitry to reduce crosstalk and interference between left and right audio channels. 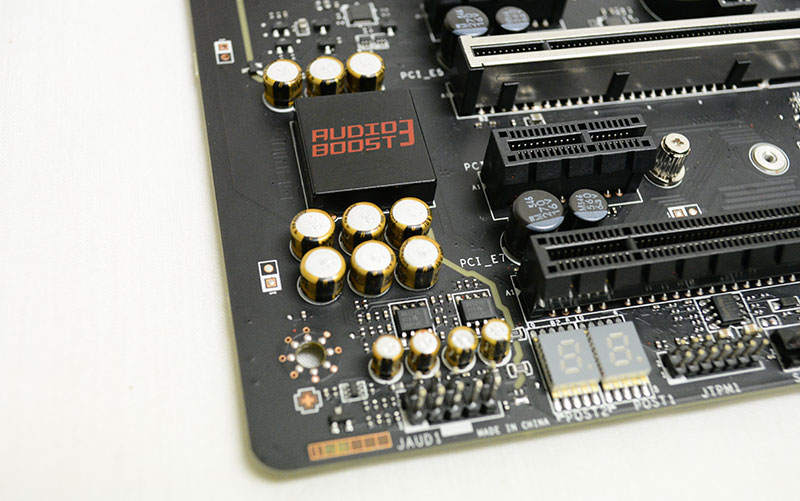 Another new implementation is something MSI calls Gaming Hotkey, which is actually a dedicated USB port below the red PS/2 port on the rear I/O panel. After plugging your keyboard into the port, you’ll be able to do things like start your PC with an assigned hotkey and even adjust the base clock and CPU ratio to adjust your overclock.

A switch at the front right corner of the board can be used to toggle the function on and off. Once the switch is set to the “On” position, the hotkey function can be activated by hitting Ctrl + Backspace. 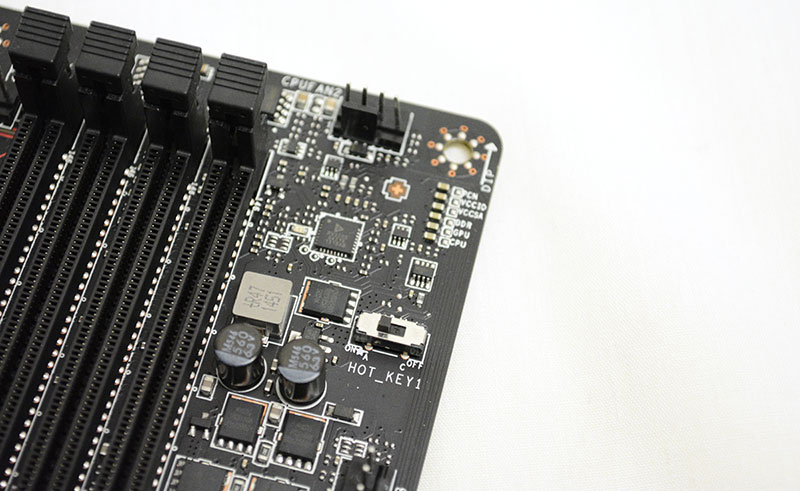 Killer Ethernet also makes a return on the Z170A Gaming M7, and the board features a Killer E2400 Ethernet controller that is able to prioritize game-related data packages above other applications. 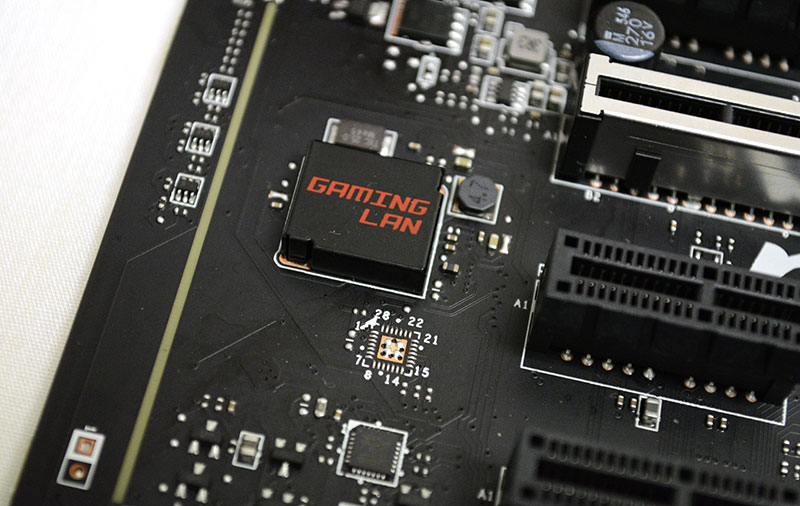 We also like the reinforced PCIe slots on the MSI Z170A Gaming M7. The first and second PCIe slots ditch the usual plastic for some metal reinforcement that MSI is calling Steel Armor. This essentially bolsters the structural integrity of the PCIe slots, and MSI says that it has added more solder points on the PCB for extra strength. 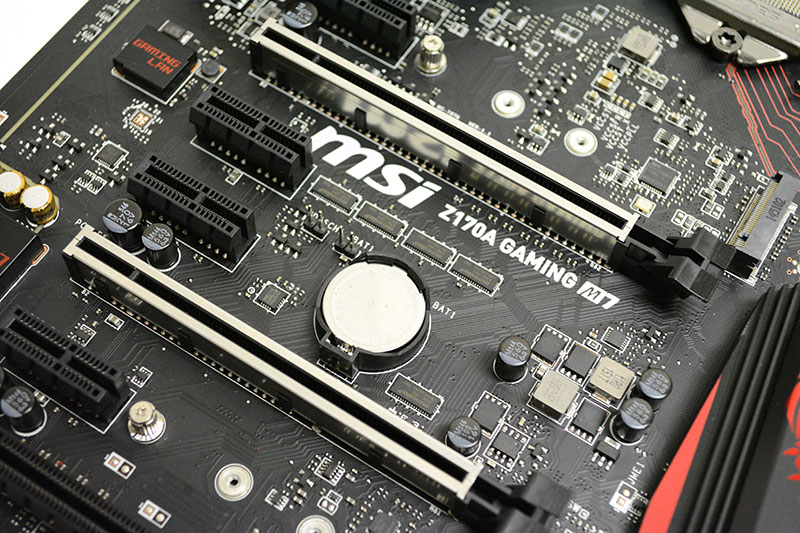 Given that PCIe slots are often subject to quite a bit of stress from heavy graphics cards, this is a nice feature that will appeal to buyers who are concerned with build quality and product longevity.

In addition, to the two PCIe slots with Steel Armor, there is a third PCIe 3.0 x4 slot at the bottom. The topmost PCIe 3.0 slot runs at x16, while the second runs at x8 mode. This means that you’ll only get the full 16 lanes of bandwidth if you run a single card. Dual graphics card solutions will run at x8/x8 mode while triple GPU setups will switch to x8/x8/x4, thanks to the 20 PCIe 3.0 lanes available.

This is made possible by the Z170 Platform Controller Hub (PCH) which now supports PCIe 3.0, thus providing an additional four PCIe 3.0 lanes for a total of 20, and is also a boon for those looking to utilize a PCIe 3.0 x4 NVMe drive.

It’s also good to see that MSI has left ample room – more than the width of a double-slot card – between the first and second PCIe 3.0 slots. Most custom GPU solutions exhaust air back into the case, so it’s good to have more space for extra ventilation in dual-GPU setups.

There are six SATA 6Gbps ports, in addition to two SATA Express connectors. 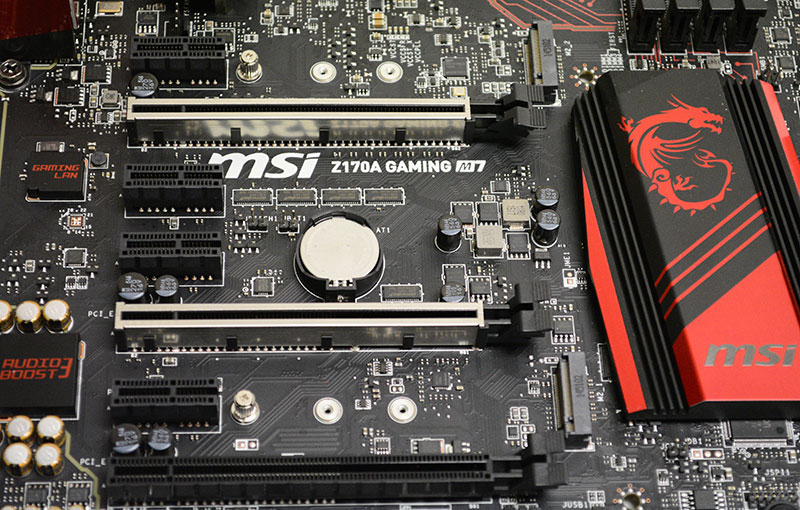 However, the second M.2 slot appears to share bandwidth with the SATA ports as well. If you populate both slots with PCIe drives, you’ll end up losing functionality on two SATA ports and the PCIe 3.0 x1 slot that sits above the x8 slot.

Overclocking with the turn of a knob

Finally, a nifty knob at the bottom right corner of the board lets you overclock your CPU by simply turning the knob. MSI calls this Game Boost, and it’s meant to provide automated overclocking as the CPU’s voltage and frequency will be automatically adjusted after you power on your PC. You’ll be able to choose from eight different positions between 0 (default) and 11. 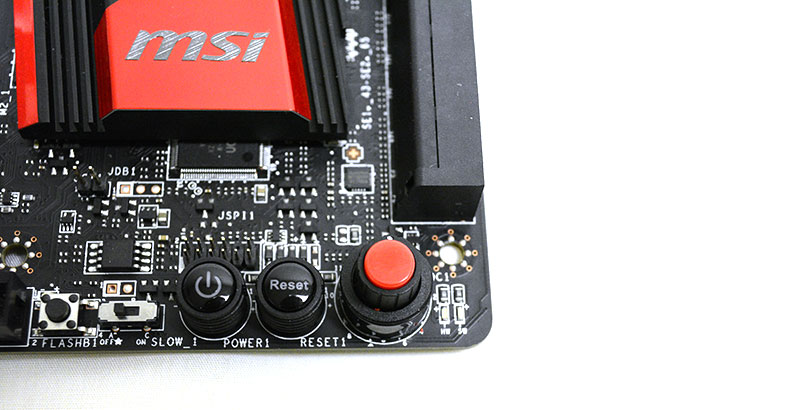 However, do note that this isn’t an on-the-fly overclocking feature. Even if you turn up the knob while your PC is on, the changes will only take effect the next time you reboot your system.