It's both hit and miss With the long awaited Diablo 2 Resurrected set to arrive on 23 September, you'd think that Blizzard Entertainment and Vicarious Visions should already be done with the game's groundwork this late into the development phase.

In that case, you'd first have to be specific about what you mean by "groundwork". If you mean the basic coding stuff and gameplay concepts, then you're good to go - they've already got those nailed down. On the other hand, if you're referring to key features like in-game chat and player lobbies in multiplayer, then let's just say that the developers still have quite a ways to go.

Cutting to the chase, the community is currently a little divided on its opinion regarding last weekend's Open Beta test, as am I - it would seem that the infernal winds are blowing both hot and cold at the same time. Some folks are generally satisfied with what the developers have been putting out so far, while others feel that despite the introduction of the Druid and Paladin classes that we found pretty enjoyable to play, the Open Beta doesn't really offer much beyond what we had in the Technical Alpha earlier this year. Not to mention that the developers might have killed the mood by delaying a key multiplayer feature till after the game officially releases. 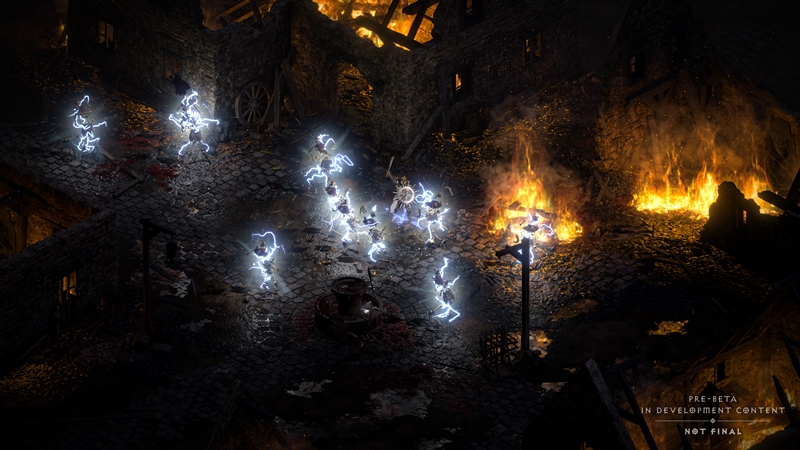 Even so, let's not jump the gun. Regarding the Open Beta gameplay experience in general, as noted above it's not that different from what we got in the Technical Alpha, though of course we were able to take a total of five different classes for a spin as compared to three before. Now, the simple answer is that the gameplay is still pretty decent if you don't factor in the occasional bug (which is normal), but by that same token, there's not much we can say about it that hasn't already been mentioned in our previous Impressions piece.

Nevertheless, although the novelty of the Druid and Paladin provided a decent amount of amusement (especially for someone who's never dabbled in the original), I have to admit that being confined to the first two Acts of the game severely hampers the "exploration" aspect that makes dungeon crawlers fun, even if I do understand the rationale of doing so.

Anyway, if we were to set aside "the joys of grinding", both newbies and returning veterans will probably enjoy (or "re-enjoy") pouncing on enemies or calling down holy light from above to smite foes when the game finally comes out. Class variety and identity is a big part of Diablo's appeal, and the fact that the community hasn't said anything about this particular aspect probably means the developers have managed to hit the right notes. As for me, I think I'll give the Paladin a shot first on release day. Not that the Druid wasn't fun, mind you - I simply prefer the sheer versatility that the Paladin offers, not to mention it feels rather nice plodding around protected by a nice suit of armour. But that's merely in context of single-player, and it is actually the game's multiplayer aspect that the community seems to be divided about. Apparently, Blizzard had previously promised to include quite a number of multiplayer features into the Beta like in-game chat, player lobbies and a competitive ladder system - all of which were noticeably absent from last weekend's test.

In short, Blizzard bailed on them, and while Executive Producer Rob Fergusson has since stepped up to explain that the team has opted to delay such features to a post-release patch in favour of optimising and improving game stability, this explanation hasn't sat well with many folks. Amusingly, though, neither side is really in the wrong here. The developers are simply ensuring that the horse is placed squarely in front of the cart, while the fans are disappointed that the OG Diablo 2's multiplayer interaction systems, which were arguably a huge part of what made it so awesome, haven't been nailed down this late in development. Of course, that isn't to say that the Beta was devoid of any PvP or Multiplayer content - players were still able to embark on tomb runs and duel one another, and a couple of streamers apparently had fun poking around with dedicated Firewall Sorcerers and other quirky PvP builds. As such, I think the Beta hasn't been a complete let-down, but yet at the same time it's also failed to impress.

However, I will concede that perhaps I'm only salty about the lack of content additions because I already played most of it in the Technical Alpha. Lots of other folks who played D2R for the first time last weekend went out and had a ball with it even without the inclusion of the promised multiplayer features, and in a vacuum the gameplay experience is still pretty fun.

After all, most of what people loved about the original D2 has been faithfully remastered for modern gaming platforms, not to mention that the reworked cinematics are amazing stuff. In short, the game is definitely still worth looking forward to on 23 Sep, and even if stuff like lobbies and competitive ladders won't be available on release day, we've already gotten the developers' assurance that they will be added in time, so frankly it's just a matter of patience. And if the community can wait a decade and a half for Diablo 3 to arrive, a couple of weeks or even months should be peanuts.