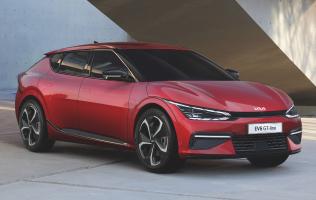 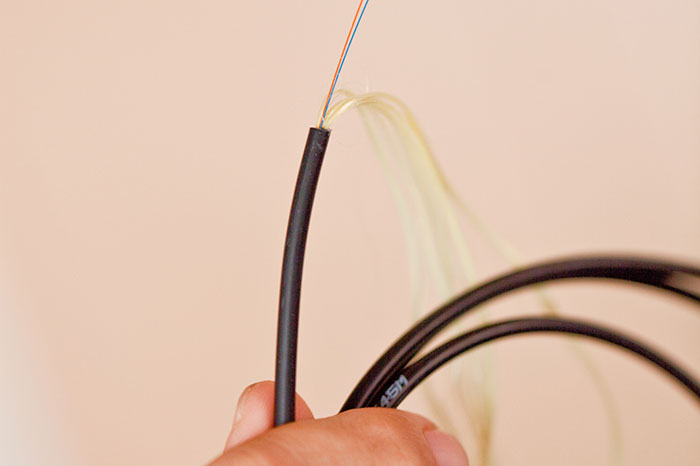 You don’t need to be a prophet to foresee the impact the Internet would have on the way we work, socialize, create, and share information. From individuals and startups, to enterprises and national economies, we’ve all reaped major benefits since the Internet became popular in the 1990s.

Of course, having the Internet is one thing; getting to the Internet is another. Most consumers in Singapore have long ditched dial-up Internet access, and went for ATM, ADSL, and cable-based technologies as early as the mid 90s to enjoy higher data rate access. But as we all know, as the number of broadband services increase (IPTV, voice over IP, high-definition video conferencing - just to name a few), so too are bandwidth requirements for broadband networks.

Part of the Next Generation National Infocomm Infrastructure (Next Gen NII) initiative, which itself is part of the Intelligent Nation 2015 (iN2015) masterplan, Singapore’s Next Generation Nationwide Broadband Network (Next Gen NBN) is a nationwide, all-fiber wired network that has been deployed to over 95% of homes and businesses since July 2013. Beside pervasive nationwide coverage, the Next Gen NBN is designed to deliver downlink access speeds of at least 100Mbps (scalable to 1Gbps or more) and uplink speeds of at least 50Mbps (again, scalable), with service plans priced favorably against ADSL and cable plans (sometimes, downright low) to entice users to make the switch.

With its overwhelming advantages over the other mediums, it thus makes little to no sense not to go the optical fiber route when your existing dial-up, ADSL, or cable broadband contract is up, or when you’re wiring up your new home. But before you start comparing plans from the various fiber broadband providers, it’s best to understand who and what's involved in order to manage expectations and avoid unnecessary hair pulling.

In this first of a series of fiber broadband and networking articles, we'll cover some of the important considerations to be aware when signing up for a fiber broadband plan. (You'd have thought that it's a straightforward affair, but we found out in a poll recently that some are still clueless with the exact requirements and procedures.)

In a nutshell, fiber-optic communication offers way faster data rates and better resilience over long distances compared to copper wire communications. But because it relies on a different infrastructure, you can’t simply subscribe to a fiber broadband plan, go pick up the equipment, and plug it into your existing phone line or cable point to get Internet access.

Since 2010, OpenNet (the company responsible for building the physical fiber infrastructure) has been progressively contacting home owners to allow it to pull the optical fiber into their homes and to install a fiber termination point (TP). This installation was free (you should have received a letter if you’re eligible), and if you took up this offer, your home is ready for fiber service. To check if optical fiber is available where you live or work, you can go to OpenNet’s website to do a coverage check. 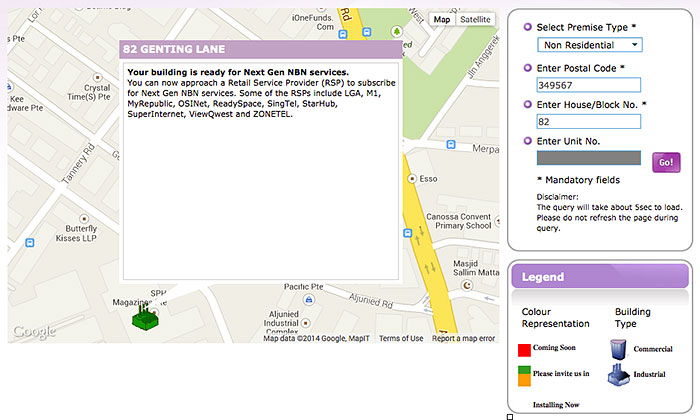 If your premise isn’t ready and doesn’t qualify for the free TP installation offer, you will have to incur a one-time charge of S$235.40 (for residential high-rise addresses) or S$481.50 (for landed property addresses) when OpenNet goes down to install the TP. (For a business customer, the charge is even higher at S$548.91.) To simplify matters, if you already have a retail service provider (i.e., a fiber broadband service provider) in mind, there’s no need to contact OpenNet directly. Just inform your RSP and it’ll help you arrange an appointment with OpenNet for the TP installation. 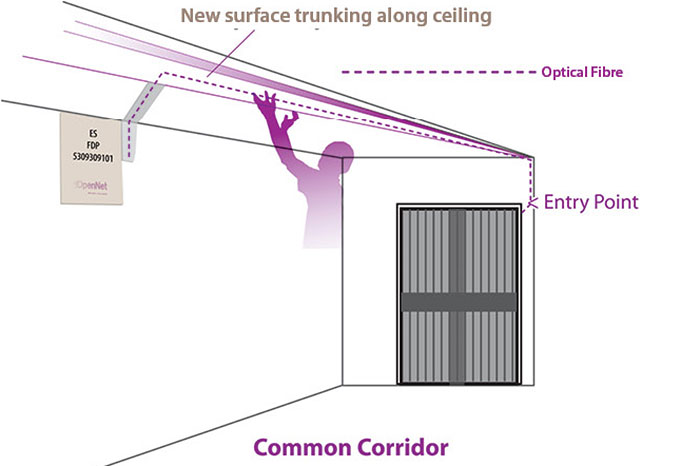 Of course, not everyone lives in a HDB flat. But whether you’re living in a condominium/private apartment or a landed property, or you’re a commercial tenant, the steps to identify if optical fiber is available for your premise are the same, that is, through the coverage check on OpenNet’s website or asking your Internet service provider. As to how the physical optical fiber will reach your home or office, in a nutshell, in the case of HDB flats, OpenNet will literally pull the cable to right outside your doorstep and house it in a new trunking along the common corridor. For condos or private apartments, OpenNet will have to first get in touch with the Managing Agent and/or Management Council (MCST); and for landed property, the cable will actually be installed via SingTel’s existing underground pipe (else, you’ve to provide an underground pipe). For commercial tenants, do remember to seek approval from your landlord too before installing the TP, since some drilling works are unavoidable.

1.) What to Expect During TP Installation Day

Ultimately, the optical fiber has to go into your home so that the TP can be installed. Our editor Vijay has blogged about his installation experience before, but in short, the OpenNet contractor will always discuss with you the best way to pull the optical fiber into your home. In most cases, a bit of drilling has to be done first to create an entry point.

Next, you’ll have to decide where you want to place the TP. Again, OpenNet’s contractor (as many as four installers may come, so don’t be surprised by the crowd) will offer some suggestions. The easiest and the most common way is to leverage on existing points of ingress and existing surface truckings, ones that you’re already using for your phone and cable lines. Of course, you can also use new trunking (provided by OpenNet) and run it along the floor skirting or the ceiling/cornice. If you want to conceal the cable in your false ceiling, our recommendation is to get your own contractor to come down, so that the job can be done exactly to your specifications. In fact, such planning should be done before OpenNet comes to your home. We know of several instances where the home owner engaged a contractor before the OpenNet appointment to ‘open’ a hole in the false ceiling near to the entry point, insert a PVC hard conduit, and then opened another hole near where he wanted to install the TP. So when the OpenNet contractors arrived, all they needed to do was to pull the fiber cable through the conduit, and installed a small length of trucking from the exit point to the TP.

For residences that qualify for the free TP installation, the first 15m of optical fiber that goes into your home is also free. It costs an additional S$35.31 per 5-meter block if you exceed that. 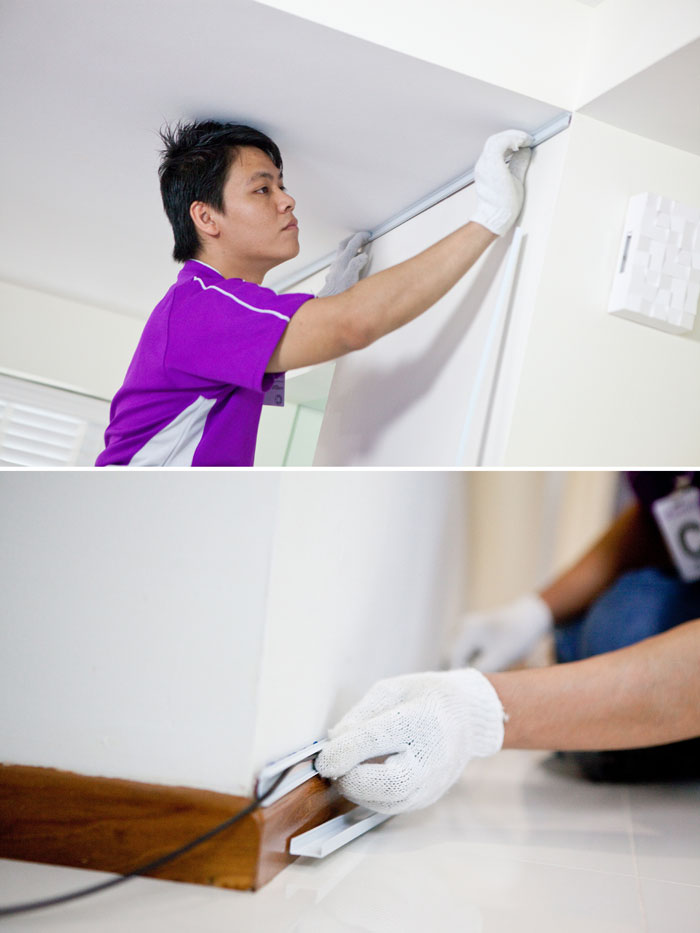 2.) Where to Put the Termination Point

Naturally, the other thing to consider is where to put the TP. We reckon most people would place it next to the existing cable/TV point; after all, the vicinity is likely where they’re also going to put the other piece of equipment necessary for the fiber broadband service to work, which is the Optical Network Terminal. Simply put, the ONT as a modem translates the signals it gets from the optical fiber into electronic signals that your router understands. It’s possible for an ONT to be a Wi-Fi router too; an example is the Zhone 2426 ONT that ViewQwest uses. While such all-in-one ONTs help to minimize clutter, we also know of many who opted to connect their own router to the ONT to get certain advanced functions that are not available on the ONT/router provided by their ISP. 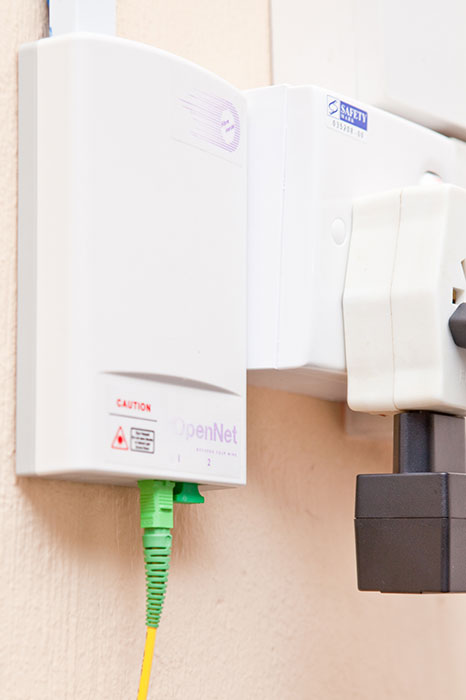 Now, if you’re renovating your home and are thinking how best to bring the fast speeds offered by fiber broadband into the different rooms, our recommendation (budget permitting) is to do structured network cabling. In a nutshell, you lay network cables (Cat5e or Cat6) to the different rooms and then terminate them into network access points. These network cables will all run (hidden from view in false ceilings or walls, of course) to a network distribution panel that you install at a chosen location, be it in the utility closet or a cabinet that your renovation contractor builds. Ideally, this place is also where you install the TP, with some space around it to put the ONT and router/residential gateway. 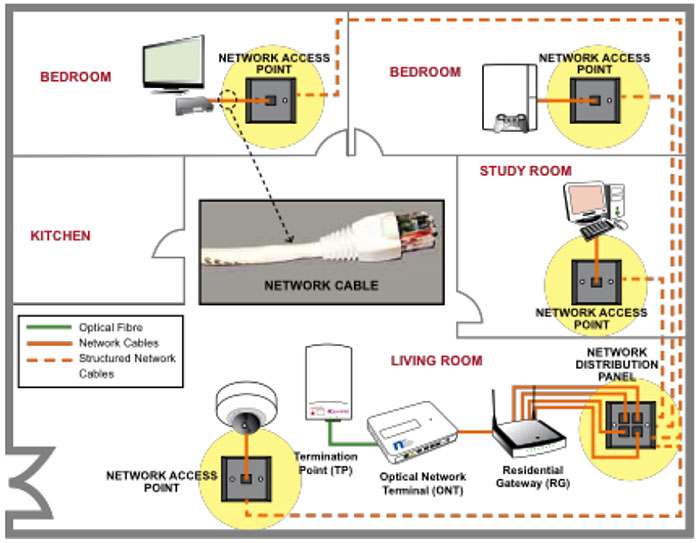 Of course, we don't live in a perfect world. What if you want to put your ONT further away from your TP? (Yes, we said earlier that you should plan to install the TP near where you want to put the ONT, but in cases like built-to-order flats, you may not have a say in where to install the TP.) Relocating the TP is an option, but that can be quite a hassle and costly. Alternatively, you can buy a longer fiber optic patch cable to go between the TP and ONT modem, so that you can pull the latter further away. If you're going to use this method, remember not to bend the patch cord forcefully when you hide it in the trunking.

If you're a new BTO flat owner, be sure to check out this thread in our forums for some nifty cabling ideas, including converting of phone line end points to network points.

In case you didn’t realize, OpenNet only takes care of the optical fiber and TP installation. When you subscribe to a fiber broadband plan from an ISP, there will be a second appointment where the ISP will send someone down to install the ONT and router. In fact, if you've taken up the free appointment with OpenNet to lay the fiber cable and install the first TP, you can skip all the above and go straight to your favorite ISP to sign up for a plan and arrange for an appointment to set up your broadband services. Some ISPs like SingTel also offer additional services (charges may apply), such as helping you to configure your other devices to connect wirelessly to your modem.

Depending on your location's fiber-ready status, OpenNet and your chosen fiber broadband service provider's resources, and your selected installation day and time, in the early days, it could take as long as a few months for the TP to be installed and the fiber broadband activated. For home users, the waiting time has shortened considerably in recent times (in part thanks to minimum standards IDA has set for OpenNet), but anywhere from two to four weeks isn't unheard of even today (it'll be shorter if your TP is already installed, but OpenNet still has to activate your line and connect it to your ISP's network). And it's no secret that some business customers can't afford the wait, and have opted to sign up with SingTel, because the largest telco in Singapore has its own fiber links to commercial buildings, and thus need not rely on OpenNet. (Some background info for those interested: In January 2013, IDA has laid out delivery standards for OpenNet, which require the network builder to connect 80% of new business sign-ups within four weeks of the order date, and the remaining 20% within the next four weeks.) 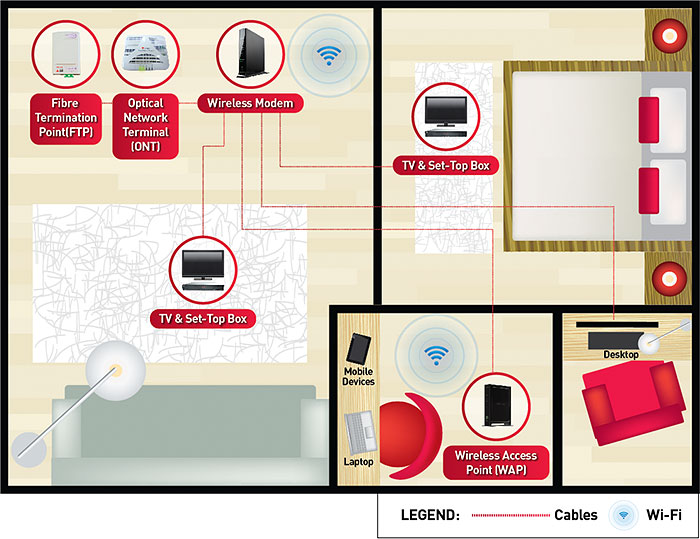 Now that we've gotten the optical fiber cable and TP installation out of the way, it's time to shop for a plan. But before you make a hasty decision, we think it's better to understand what the ISPs meant in their offers, and we don't mean just the prices of the plans. So stay tuned for our next article where we explore these areas.