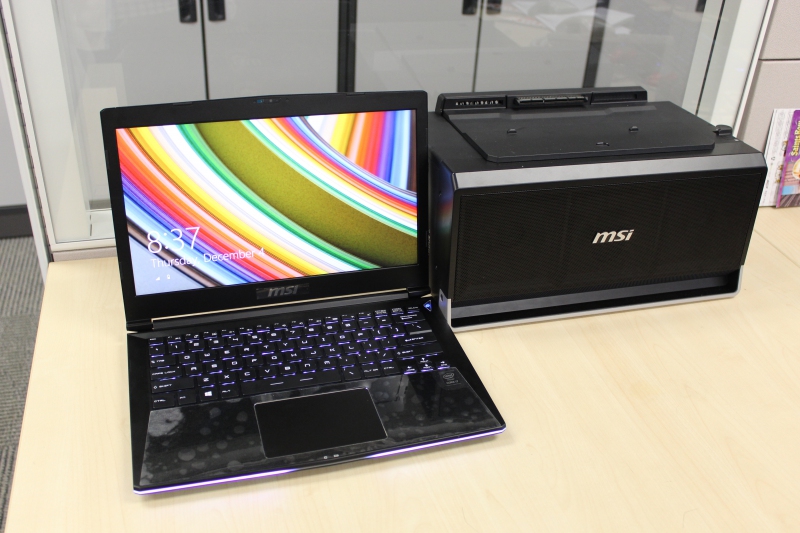 A taste of what's to come

We've previously written about the GS30 2M Shadow and Dock, poring over every single detail, in our previous article. In light of MSI's recent reveal of the machine at CES 2015, we thought you might be interested in finding out how the machine fared when we put it to the test using our usual benchmarking tools. As our machine is based on preliminary model, the hardware might not be the same as the production version. Despite that, the numbers we got here should be sufficient to see at least the base performance levels that we can expect from the final product.

Since the MSI GS30 2M Shadow's hardware at the time of test wasn't finalized in concrete, we did a focused test run to share preliminary performance figures with 3Dmark and Tomb Raider using the notebook running on its integrated Intel 5200 Iris Pro Graphics engine, the NVIDIA GeForce GTX 980 (which is included in the dock) and our own AMD Radeon R9 290X to replace the dock's default graphics card. For comparison, we brought out other recently tested gaming notebooks to give you a better perspective of where MSI's uniquely configured machine stands. 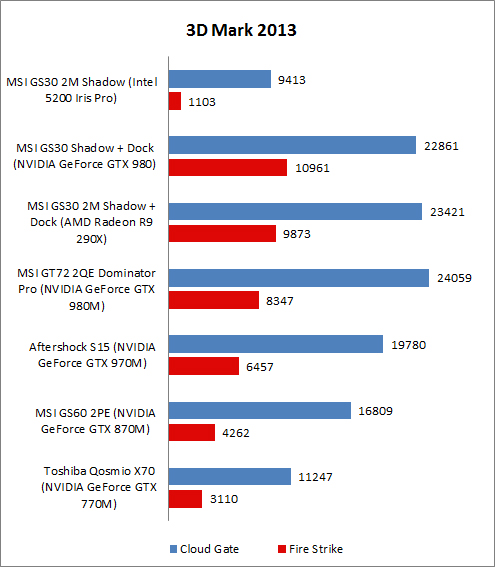 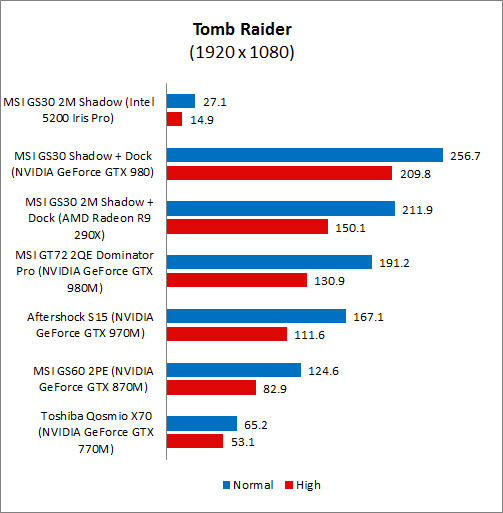 Remember, since the MSI GS30 2M Shadow we benchmarked isn't a production model, the numbers we reported above may differ from the actual retail model. That aside, the machine does produce some interesting comparisons.

In 3DMark's Cloudgate test, the NVIDIA GeForce GTX 980M in MSI's GT72 2QE Dominator Pro is clearly better, edging out the desktop NVIDIA GeForce GTX 980 present in the GS30 2M Shadow's dock by more than 1000 pointous. It also barely beats out the Radeon R9 290X but the fact that it does (even by a tiny margin), shows how capable NVIDIA's GeForce GTX 980M GPUs are. Cloudgate tests a card's DirectX 10's capabilities, which is currently on the way out, as most modern games are now running on DirectX 11 now.

In Fire Strike, a test of DirectX 11 capabilities, we see both the desktop graphics cards gain the upper hand over the GeForce GTX 980M on the GT72 2QE. Clearly, it's the reverse of the earlier situation. The desktop GeForce GTX 980 is almost 2000 points ahead of the notebook version, with the Radeon R9 290X sandwiched between them. The Radeon R9 290X is obviously not as powerful as the GeForce GTX 980 but it still manages to outperform the notebook's GPU. Given the discrepancy of the outcome in both tests, we personally feel that the drivers and BIOS of the MSI GS30 Shadow and its dock need to be improved upon.

On Tomb Raider's benchmark, the results seem to better position the GeForce GTX 980 within the Gaming Dock and looks more like the performance stats we expect of it compared to other graphics cards. The NVIDIA GeForce GTX 980 blows everything out of the water, leading both the GeForce GTX 980M and the Radeon R9 290X. On the integrated graphics side, the Intel Iris Pro Graphics 5200 barely achieves console (PS3 and Xbox 360) quality with sub-30 FPS achieved at Full HD resolution - a decent feat by integrated graphics from Intel, but still not adequate for serious gamers.

That done, we're now moving on to the final part of our benchmarking, which is the battery life and power consumption benchmarks. 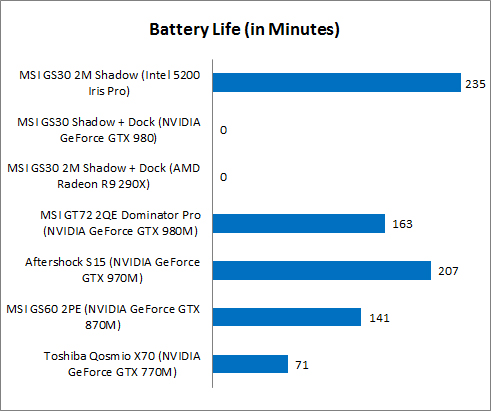 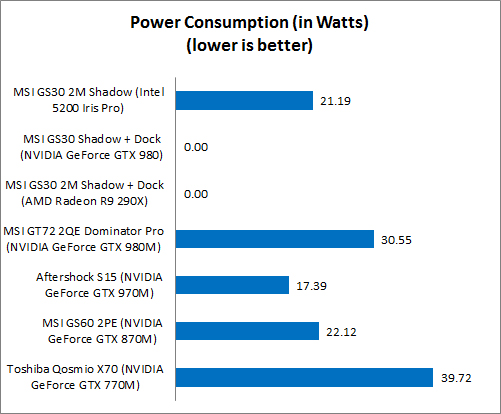 The MSI GS30 2M Shadow notebook beats out all the other contenders in this section, because of two main reasons. One, it doesn't use a a discrete graphics chip, so power usage will be lower and secondly, it's a 13.3-inch notebook so the power drain from the screen is lower as well. That said, it's still impressive to see that the Aftershock S15 coming so close behind, especially since it's a 15-inch notebook with a dedicated graphics card - its power consumption figures are quite low when compared to the MSI GS30 2M Shadow and that really helps it achieve commendable battery up-time.

As the charts show, on its own the GS30 2M Shadow is hardly a gaming notebook. Instead, without its dock, the GS30 2M Shadow is just a standard slim notebook. It may have MSI's trademark looks, but it's hardly groundbreaking or nor features something we haven't seen before (besides the docking connector of course). But when combined with the dock though, MSI may have just created something that might fill a niche. It has the size and performance for a slimline portable notebook. It has the power of desktop but yet is tech friendly enough that even the most ignorant of users can easily swap out and replace its hardware. In short, it is two machines in one and it does both jobs admirably well.

For consumers who want the best of both worlds but can't be bothered to get two machines, the GS30 2M Shadow fills that need nicely. Its ultra portable 13-inch notebook is perfect for everyday computing needs and it's dock for desktop gaming power. As such, MSI's GS30 2M Shadow is the first of its kind to balance both needs and integrate them into a singular solution.

While we've initially reported that the notebook and gaming dock will be sold as a combined solution, MSI might yet decide to sell the GS30 2M portable notebook separately for those who would like to upgrade to the gaming dock when required in future (and it's a great way of starting small and not spend on a big sum at once). Meanwhile you would want to know about availability and price, but we've no visibility of that now. We might have to wait a couple of months before we get more firm plans for this region.

To reiterate, if you've missed out our initial detailed preview of the notebook and the gaming dock, do refer to our earlier article.