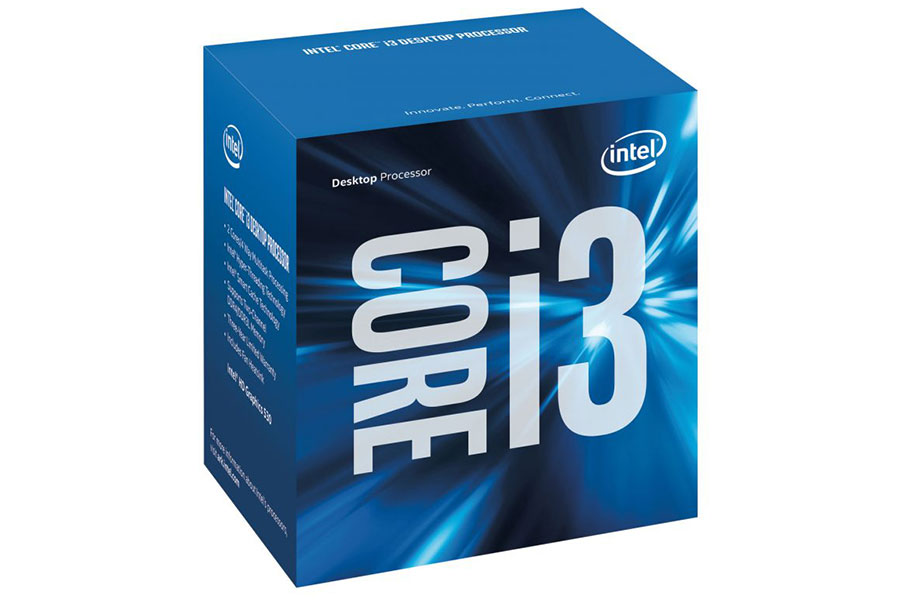 Intel’s seventh-generation Kaby Lake processors represent a modest, if unexciting, upgrade over its Skylake predecessor. A large part of the performance increase can be attributed to the clock speed increases – 200MHz in the case of the Core i7-6700K (4.0GHz, 8MB L3 cache) and Core i7-7700K (4.20GHz, 8MB L3 cache) – so there isn’t really a compelling reason to upgrade if you’re already on Skylake.

In fact, when we previewed the latter chip, we noted just a 9 per cent increase in Cinebench over the Core i7-6700K.

That’s not to say that there’s nothing interesting about Kaby Lake however, and we were also introduced to the overclockable Core i3-7350K processor. Intel excluded overclocking from its more affordable chips with the Sandy Bridge processors in 2011 (with the exception of the Pentium G3258 Anniversary Edition, which was field tested here), so an unlocked Core i3 processor is something we haven’t seen in a long while.

As a result, the Core i3-7350K (4.20GHz, 4MB L3 cache) may just be the most interesting chip in Intel’s Kaby Lake line-up. It isn’t exactly a steal at US$170 (~S$243), but it is still a more budget-friendly option than its higher-end quad-core counterparts, and offers customers the ability to unlock yet more performance.

For this article, we’ll be focusing on some preliminary base numbers first, and will update it with other figures and overclocking performance later on.

Here’s the configuration of the test setup we used:

Cinebench is a benchmark tool used to compare CPU performance across different systems, so we’ll be using it to evaluate how well the best of Kaby Lake goes up against the best of Skylake. The test scenario uses all of the system’s processing power to render a photorealistic 3D scene, making use of various algorithms to stress all available processor cores. It's unfortunate that we don't have a Core i3 Skylake to go up against the Core i3-7350K, so we'll be comparing it against the top end of Skylake and Kaybe Lake chips.

The Core i3-7350K was around 53 per cent slower than the Core i7-7700K – that’s quite a significant difference, but not an unsurprising one given their respective places in the product stack. 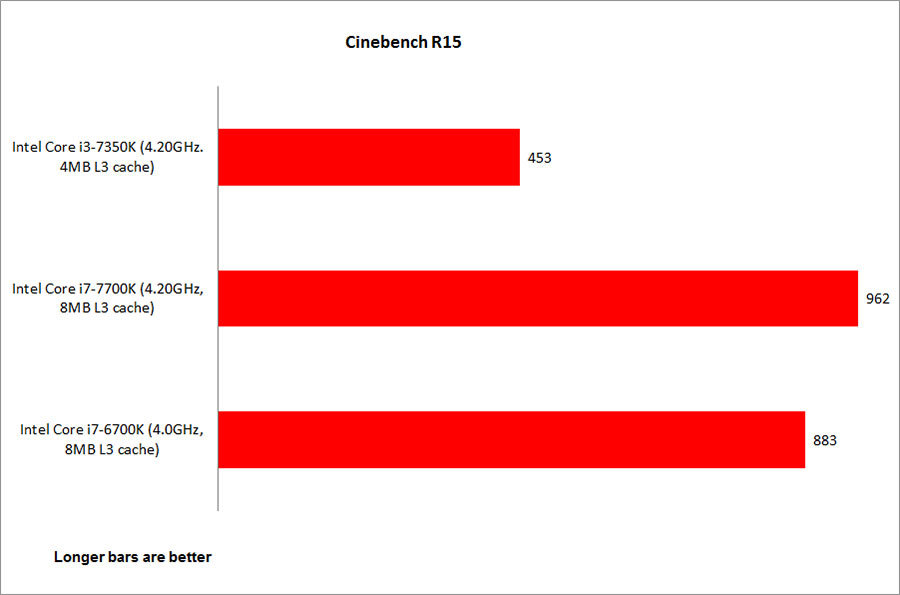 The Core i3-7350K actually put out nearly identical performance as the other two Core i7 chips in the creo-01 and energy-01 viewsets, signaling that those two rely almost exclusively on graphics performance as opposed to CPU power.

The maya-04 viewset presented quite a different result however, and the Core i3 chip was around 25 per cent behind the Core i7-7700K. This viewset is actually derived from traces of the graphics workload generated by Autodesk’s Maya 2013 application, and includes numerous rendering modes which can benefit from multiple cores. That said, the Core i3-3750K is a dual-core, four-thread part, which may explain why it fell behind the Core i7-7700K with its four cores and eight threads. 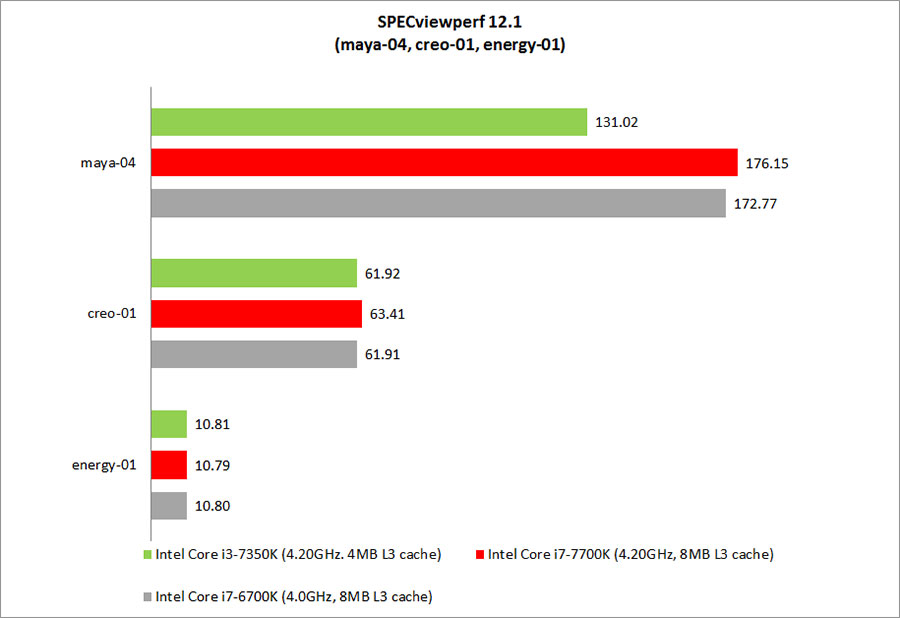 Fire Strike uses a multi-threaded DirectX 11 engine, and the Core i3 chip’s fewer threads and lack of support for Turbo Boost 2.0 probably accounts for it falling behind the Core i7-7700K by around 27 per cent.

The difference was less pronounced in the more demanding Fire Strike Extreme and Ultra benchmarks, and the Core i3-7350K was only 5 per cent slower in the latter test. 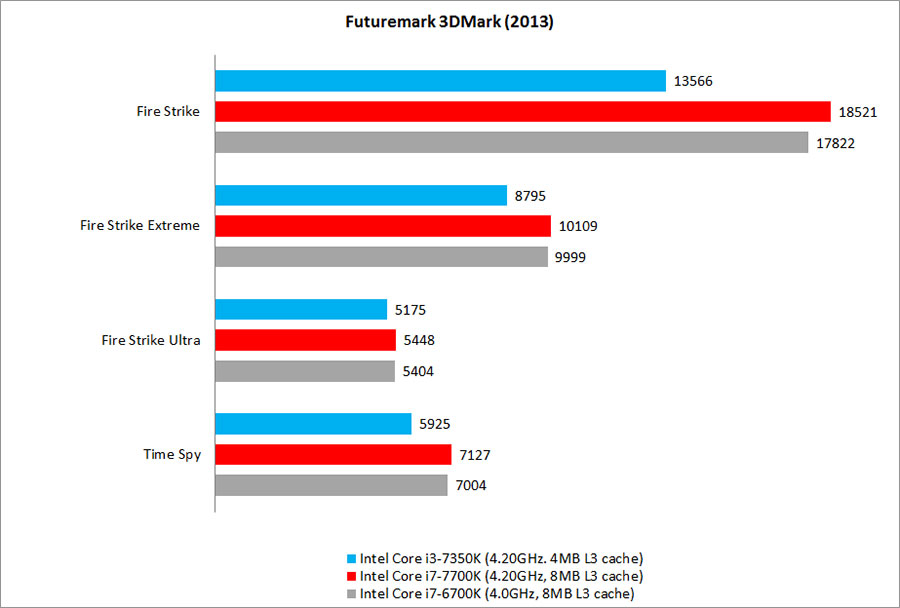 In Ashes of the Singularity, the Core i3-7350K was between 26 and 35 per cent behind the Core i7-7700K in the DirectX 11 benchmarks. The chip did not evince much of a performance drop when moving from the High to Crazy presets. This indicates that the GPU is already pushing the system as much as it could but, it's effectively being held back by the CPU - regardless of the graphics settings. Contrast this to the the Core i7 system's performance where you can tell that it could use more GPU power when you scale graphical settings and it isn't held back by the CPU.

It’s clear that you shouldn’t skimp too much on the CPU if you want good gaming performance, even if the general consensus is that the graphics card matters more. 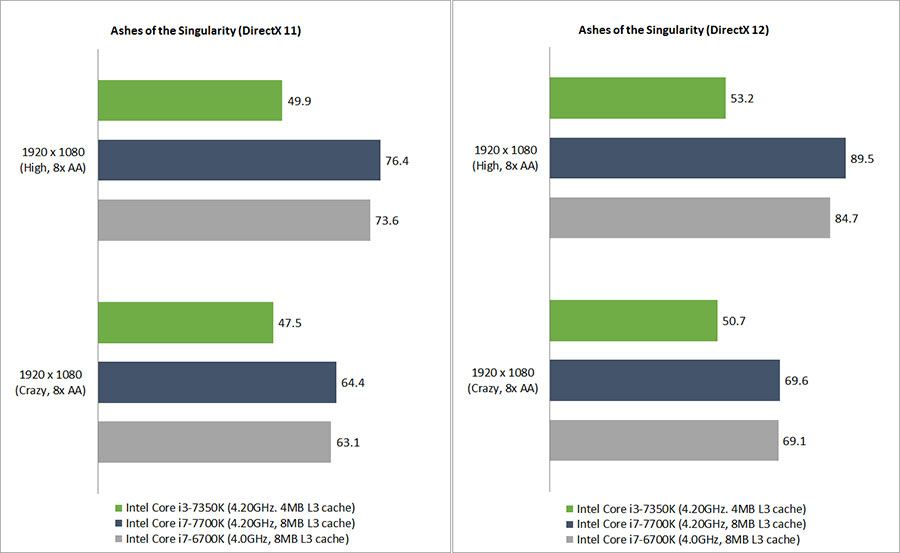