Outliving zombies with bibimbap: An interview with the cast of Netflix's Kingdom

Outliving zombies with bibimbap: An interview with the cast of Netflix's Kingdom 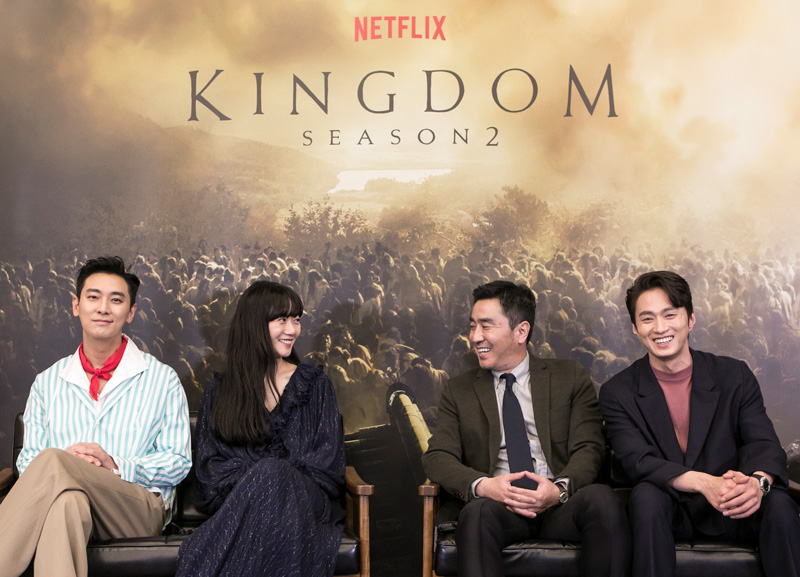 If you’re a fan of zombies and political thrillers, you’ve probably heard of Netflix’s Kingdom. The show is a South Korean TV series set in Korea’s Joseon period - when things were tumultuous enough politically without having flesh-eating zombies thrown into the mix too.

Season 2 of the smash hit zombie-horror series is just around the corner, and I sat down with other members of the media to interview its main cast - Ju Ji-hoon (who plays Crown Prince Lee Chang), Bae Doona (Seo-bi), Ryu Seung-ryong (Cho Hak-ju) and Kim Sung-kyu (Yeong-shin).

What was it like to film Season 2 of such a massively popular TV series? How would these actors want their characters to die? Who wants to survive the apocalypse by making salads and feasting on bibimbap? Read on to find out! Kingdom is Netflix’s very first South Korean series. It’s shot in a unique way - more like a Western drama with short seasons and a lot of secrecy. How do you feel working on something like that?

Ju Ji-hoon: Not much was different, because we weren’t aware of the fact that it would be divided into seasons at the very beginning of our project. We were actually happy with that, because Season 1 was so well-received around the world and there were high expectations for Season 2. Even before we launched Season 2, we got a lot of questions about further seasons - so we were very pleased with the reaction.

Bae Doona: I was personally extremely proud of the reaction to our series. I think Kingdom is an extremely Korean work of art, whether it be the actual visuals, the costuming or the makeup - which are all based on actual historical study. I am extremely proud to be a part of a project that has proven, once again, that the most Korean product is the most popular globally.

Ryu Seung-ryong: I believe Kingdom has succeeded in portraying an epic world and story that can’t be contained in the short running time of a film. I think it’s unique in that it has zombies, which are very familiar to a worldwide audience, and extremely, uniquely Korean elements too.

Kim Sung-kyu: I think the biggest difference that we have while doing this series, is that I am constantly curious of what’s going to happen next. My character is always in danger and action scenes, and I wonder if he will continue to even be alive. I think as much as our viewers are, I am very curious to see where the series goes. It’s pretty common to kill characters off in a zombie drama. If your character ever had to die - how would you like them to go out?

Ju Ji-hoon: Personally, I truly hope that my character achieves everything he has set out to do before he dies. I’d be satisfied if he died that way.

Bae Doona: I think the same thing goes for me and everyone else here. We all want to die a meaningful death, and I would like my character to leave a meaningful mark. I actually told our writer Kim Eun-hee that if I’m bitten, I’ll still be on-screen as a zombie. I’m not leaving even if I die.

Ryu Seung-ryong: I’m going to make sure I get my hands on as many resurrection plants as possible. I’ll enjoy them with salads and bibimbap and make them into tea to grow my immunity. I will not die!

Kim Sung-kyu: This is something I thought about while reading the script for Season 1. I thought, "If there’s a Season 2, how would I die - if that turns out to be the case?" I’d like to die fighting, to my very last breath. Was it easier or difficult to return to your role in Season 2? What were your biggest challenges this season?

Ju Ji-hoon: For me, it was very unique and exciting. About a year had passed before we were on set for the second season’s shooting. Because we all shared this experience during the previous season, I wouldn’t say it was a difficult challenge but a very special experience instead. It felt like we had just wrapped up the previous season two or three days ago.

Bae Doona: As for me, it was a strange and special experience as well. A year had passed and when I went back into costume and makeup, I almost felt like I was automatically brought back to being Seo-bi. It wasn’t difficult getting back into character, but Season 2 is a lot more fast-paced and there are many spectacular scenes, so there was some difficulty in acting through that. Also, there is the aspect of Seo-bi’s occupation, which brought up conflicts in work ethics and whatnot - so those were some things I focused on and attempted to express the best I can. Stepping back into the role however, wasn’t too difficult for me.

Ryu Seung-ryong: The same goes for me as well. For me, during the break in between both seasons, I was playing a very different role from Cho Hak-ju, frying chicken in a comedy role. I was a little worried stepping back into that role in Season 2 afterwards, but once I had the script in my hands and got into wardrobe and makeup, it’s almost as if my cells remembered the character. Everything came alive, and that was also thanks to the amazing teamwork we had.

Kim Sung-kyu: Rather than being a simple or difficult task, it was very strange and odd for me. As my character played his role among the other three characters in the story and gave back-and-forth influences, I think that’s what happened to me as an actor as well. We were all positive influences to each other in that way. If there was a real-life zombie attack, how well do you think you’d do? What kind of survivor would you be?

Ju Ji-hoon: I think because we live in the modern day and our zombies can’t get into water, I would get on a ship and try to find help by signalling an S.O.S. There wouldn’t be much food on the ship, so that’s what I’d do.

Bae Doona: Seo-bi was constantly, throughout both seasons, trying to find a reason behind the epidemic as well as a treatment - so I have a couple of ideas up my sleeve, but I don’t think I can tell you any of them because of spoilers. I don’t think I’m allowed to say anymore!

Ryu Seung-ryong: Once again, my answer is going to be a stronger immunity, hopefully thanks to some particularly useful salads.

Kim Sung-kyu: I don’t think I would enjoy being bitten on certain parts of my body, so I would tell them where to bite me and just go with that.