The highlight of the OnePlus 8 and OnePlus 8 Pro is the inclusion of a 5G-capable flagship chipset - the Qualcomm Snapdragon 865 mobile processing platform paired with a Snapdragon X55 5G modem - at its price point. While our sunny island doesn't yet have 5G service, when it arrives, this phone will be ready.

Competing devices would naturally be other phones with the same chipset, or its competitive equivalents, like the Kirin 990 5G from HiSilicon (under Huawei) and Samsung's Exynos 990 processors. Naturally, we'd have to pit the OnePlus 8 series against the Samsung Galaxy S20 Ultra, the Oppo Find X2 Pro, and the Huawei P40 Pro. We'd also take the latest flagship smartphone by Apple (iPhone 11 Pro) and the previously reviewed OnePlus 7 Pro just for comparison's sake. 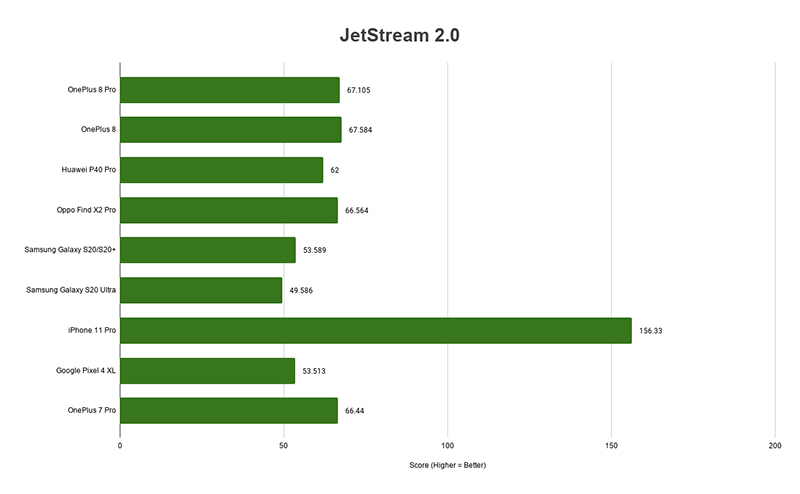 Given that both OnePlus 8 series phones pack the same chipset, the similar scores reported on the benchmark aren't surprising. They are also on par with the Snapdragon 865-backed Oppo Find X 2 Pro, and ahead of Huawei and Samsung's current-generation flagships. 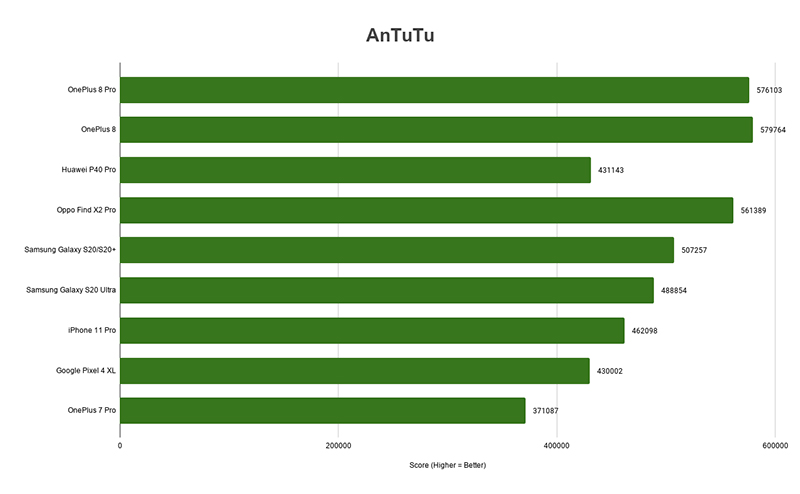 Both OnePlus models lead this benchmark, beating the Find X2 Pro by a slight margin ahead. At this point, we're quite assured that the OnePlus 8 series devices deliver the flagship-quality hardware and performance that's usually relegated to expensive, premium devices. 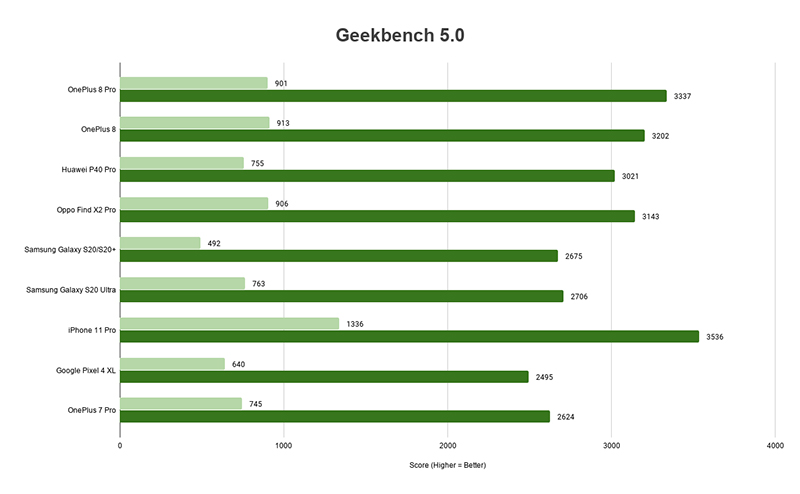 The same performance lead in the Chinese-made AnTuTu benchmark is repeated in the US-made Geekbench measurements. This helps confirm that the device can at least be consistent across multiple benchmark tools, which may allude to its real-world performance regardless of the apps you use. 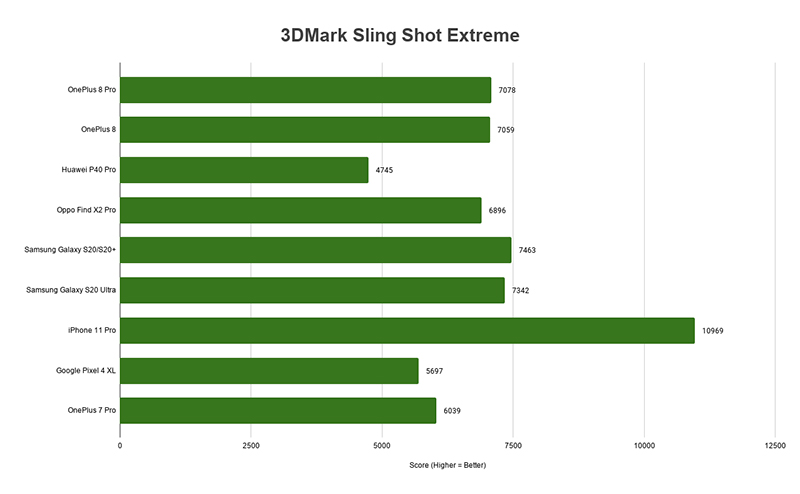 The OnePlus 8 series is slightly behind the Samsung range of flagships in terms of benchmark performance, but it's unsurprisingly on par with the Oppo's Find X2 Pro. Game graphics and video content pose no significant issues to us in real-world use either.

In summary, you're looking at a flagship-quality device with 5G capabilities when it comes to the OnePlus 8. Similarly, the OnePlus 8 Pro doesn't compromise its performance even with the bells and whistles attached. 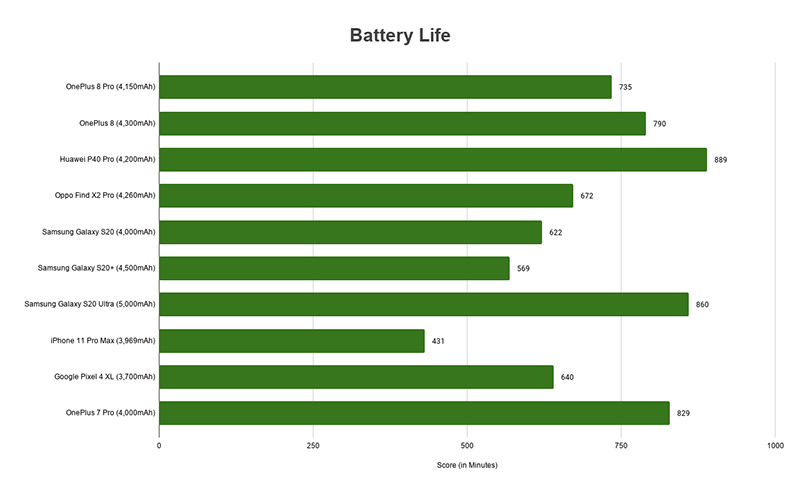 The OnePlus 8 may have a smaller 4,300mAh battery capacity when compared to the Pro variant, but its 1080p display might just give it the longer-lasting edge in battery life. Conversely, the 4,510mAh OnePlus 8 Pro was necessary on the larger device given the more demanding 1440p display. Both phones still outperformed many of the more expensive, 2020 flagship alternatives, except for the battery-efficient (but lower technical performance) Huawei P40 Pro and the 5,000mAh Samsung Galaxy S20 Ultra. OnePlus phones generally fare well in our battery benchmarks, which was why included the older OnePlus 7 Pro at the bottom for comparison's sake.

The OnePlus 8's and OnePlus 8 Pro's fast-charging capability (dubbed Warp Charging 30T) goes hand-in-hand with its 30W (5V, 6A) charging adapter that's supplied in the box. As mentioned earlier, the OnePlus 8 Pro also builds on the wired charging abilities with a 30W wireless charging feature dubbed Warp Charge 30 Wireless that is unavailable on the regular OnePlus 8. Unfortunately, the OnePlus 8 Pro doesn't come supplied with a compatible wireless charger by default (it's sold separately, and it's also not available on the official Lazada storefront), so we didn't have the opportunity to put its supposedly super-fast wireless charging to the test. However, if the name and claims are any indications, it should theoretically see the same charging speeds as its wired counterpart.

By using the included wired 30W charging adapter, both the OnePlus 8 and OnePlus 8 Pro took the same amount of time to replenish from 0% to 100% - about 75 minutes each. Both phones were also able to hit 50% charge somewhere around the 35th-minute mark. We were expecting slight charging time differences between both models given their differing battery capacities. Still, it appears that the proprietary fast-charging technology has some sort of power regulation involved to ensure an even charge over time. 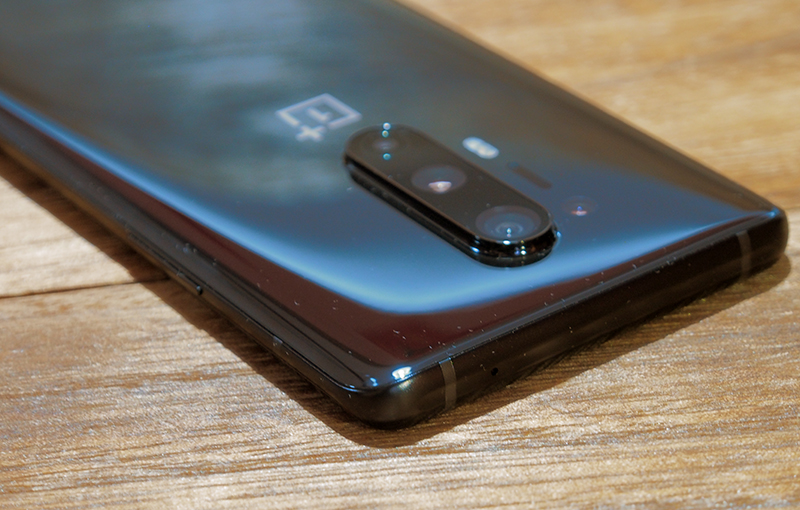 On their own, OnePlus 8 and OnePlus 8 Pro check the right boxes when it comes to high-end, high-performance smartphones, offering a great user experience for all the core phone functionalities. Similar to the other high-end devices of 2020, we wish the OnePlus 8 series came with expandable microSD storage and 3.5mm audio jack. Right now, only the Samsung Galaxy S20 series offers expandable storage that doesn't use a proprietary storage card (Huawei P40 Pro, for example, requires their exclusive nano memory card).

Elsewhere, the OnePlus 8 and 8 Pro doesn't have quite that shine that the Oppo Find X2 Pro was able to pull off, display- and audio-wise. If you remember the Find X2 Pro's review, you will find rather high praise for its display and audio capabilities, and it did perform very well in the real world. The OnePlus 8 series (especially the Pro version) was enjoyable but does not have the audio clarity and reproduction offered by the Oppo device. We did mention that the OnePlus 8 Pro's video enhancements didn't result in an adverse viewing experience, but it's no doubt outmatched by the Find X2 Pro's overall viewing experience. That's not to say that the OnePlus 8 series are subpar. I've enjoyed using them more than using the Huawei P40 Pro, and Huawei's flagship phone was already polished given the efforts they've made to cover the bases.

If you look at the numbers, the OnePlus 8 series also brings more to the table, purportedly offering the same or better overall benchmark performance as the rest, even if the OnePlus 8 series doesn't snag the first place in these benchmarks or real-world use. The P40 Pro and Galaxy S20 Ultra offer better battery life, Oppo Find X2 Pro has a viewing and auditory experience that's hard to beat, and the Huawei and Samsung counterparts offer excellent camera photography experience that's above many. 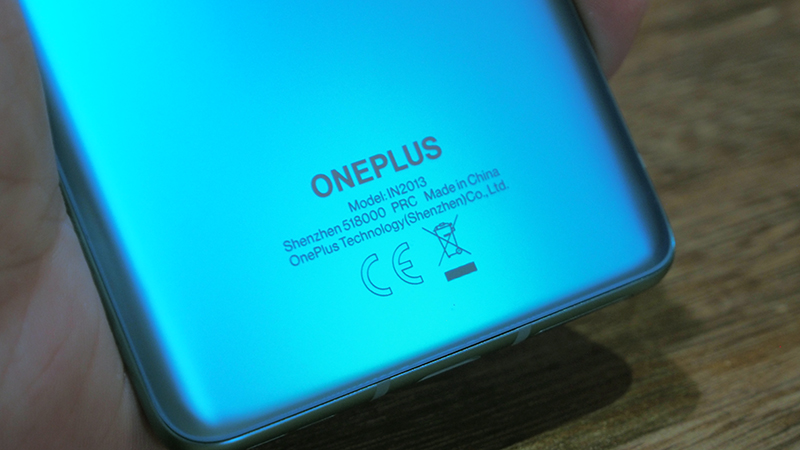 The price point and overall package perspective is where Oppo turns the fight towards its favour. Starting at S$998 for the OnePlus 8 and S$1,298 for the OnePlus 8 Pro, they are by far the most affordable flagship quality, 5G-ready smartphones currently available in Singapore (as of writing). If you want another flagship phone with better video-watching experience, be prepared to fork out S$1,699 for the Oppo Find X2 Pro and live without wireless charging. You want 108 megapixels on your rear camera instead? The S$1,898 Samsung Galaxy S20 Ultra is waiting for you, or you can settle for the S$1,298 or S$1,498 Samsung Galaxy S20/S20+ with 64-megapixel cameras. There's also the S$1,488 Huawei P40 Pro, but you'll have to live without Google Mobile Services. All these phones are great, but they don't have the kind of pull on a phone user who values the extra S$200 to S$800 in their pocket or aren't willing to pay extra for a better version of a feature but yet want a flagship status phone.

Is it worth to top-up for the OnePlus 8 Pro?

Between the OnePlus 8 and OnePlus 8 Pro sits a S$300 difference, offering somewhere 30 extra frames per second on your display refresh capabilities, a slightly higher display resolution (though not usually appreciable), fast wireless charging support (though no wireless charger is provided and you can't get a compatible model locally), a much better photography system with decent zoom capabilities, and a slightly larger screen/body with IP68 water/dust resistance protection. If you ask us, the extra S$300 does make it a better phone just solely because of the wealth of features it adds on - some not so obvious, and some appreciable ones.

However, if you're thinking about paying the extra S$300 for the Pro version, then remember to consider the S$1,298 Samsung Galaxy S20 first. It has a similar display resolution and refresh rate capabilities, wireless charging support, an equally impressive rear camera configuration, and equal RAM and internal storage capacities to boot. What the regular Galaxy S20 has ahead of the OnePlus 8 Pro is microSD expandable storage, better software features, after-sales service and support. Where the S20 loses out to OnePlus 8 Pro is its screen size, 5G support, overall chipset performance and battery life, which doesn't sound like any strong ace up its sleeves. It gets worse once you consider telco plan/service oriented phone buys where the big three from Singtel, StarHub and M1 don't offer OnePlus phones, but almost any telco (including MVNOs) offer Samsung devices.

Effectively, the OnePlus 8 series aren't quite the flagship killers in the sense of having multiple, better features than others - a claim proven too huge for any brand, really, time and again. However, they offer good value, especially the non-Pro version which brings all the necessities and the high-quality performance at a price lower than many, on a UI that feels non-intrusive and neat. 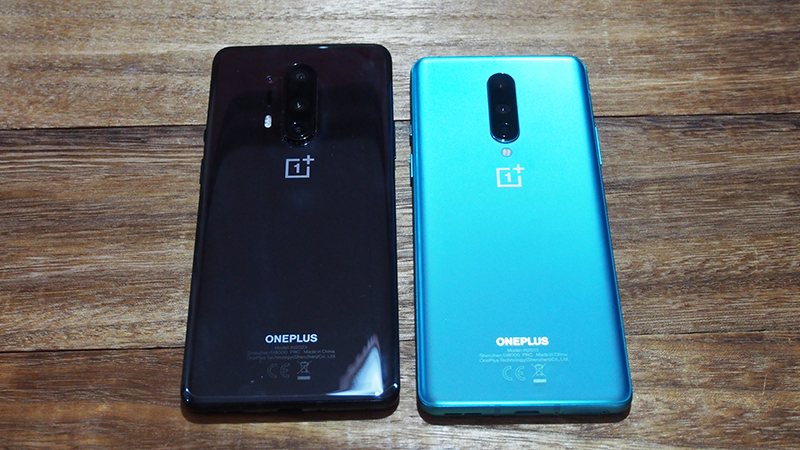 Logically, the OnePlus 8 is the phone to get when people tell themselves they "want a current-gen flagship phone that doesn't cost more than a thousand dollars". Realistically, many luxuries, such as the bells, whistles, and even brand biases, play a part in choosing your high-performance phone.

If you're a mid-range phone user that doesn't quite understand what all this flagship fuss is about, the OnePlus 8 makes an excellent device to introduce yourself into the high-end world of flagship smartphones. Alternatively, it's still a good choice if you want to pay the lowest possible price for a smartphone with Snapdragon 865 without skimping out on some niceties, like a 90Hz display, clean-looking operating system, passable main camera, all on a phone that lasts reasonably long and is even 5G network ready. On the other hand, the OnePlus 8 Pro is for the brand-agnostic users who want all the high-end specs and features, with better and more flexible camera kit while possible paying the lowest price possible for a full-fledged flagship phone of this year, with a 5G modem to boot.

All said and done, the OnePlus 8 series are nice phones, just that they don't particularly excel at any one arena. Finally, if you do end up choosing the OnePlus 8 route, don't forget there is an option to pick up the 12GB RAM and 256GB storage editions of the Pro and non-Pro models for S$100 more. You can find all the purchase options here at their OnePlus Lazada Flagship Store.