Yet another forward looking feature that the second generation Maxell architecture will incorporate is VR Direct to enhance virtual reality gaming. Obviously the Oculus Rift has been making waves in the tech industry and we too have handled it in several demos that reinforce its immersive nature will eventually propel it into a must-have hardware gear.

VR gaming is however still at its infancy - far from even niche adoption. While we await its impending release in a big way, one area that has yet to be ironed out conclusively is latency. Any perceived delays can severely disrupt the VR experience, such as a mismatch in head movement and what the game displays on your head unit. To overcome motion sickness and other related VR-related concerns like headaches, latency must be minimized throughout the usage experience and processing throughput.

NVIDIA estimates that the standard VR pipeline from when you move your head to when it translates to a respective screen action on our VR display is about 50 seconds. To achieve the goal of reducing latency from head tracking to provide a more real-time VR experience, NVIDIA has improved on the following:-

- Improved on the interconnection between the game the GPU, thus shaving off 10ms off the standard VR pipeline.

- Next, NVIDIA banked on MFAA to further reduce GPU related latency to deliver the preferred level of performance. Since there's less overhead and effort required to attain the quality of the game experience with MSAA, MFAA has liberated the GPU by an additional 4ms.

But that's not all. NVIDIA is currently working on technique called Asynchronous Warp to throws out the need for the GPU to re-render each frame from scratch. Asynchronous Warp used the last rendered image and updates it based on the latest head position communicated to it by the VR sensor. This allows you a more immersive VR gaming experience as there's less discontinuity between head movement and action on the screen through vastly reducing latency traditionally encountered. 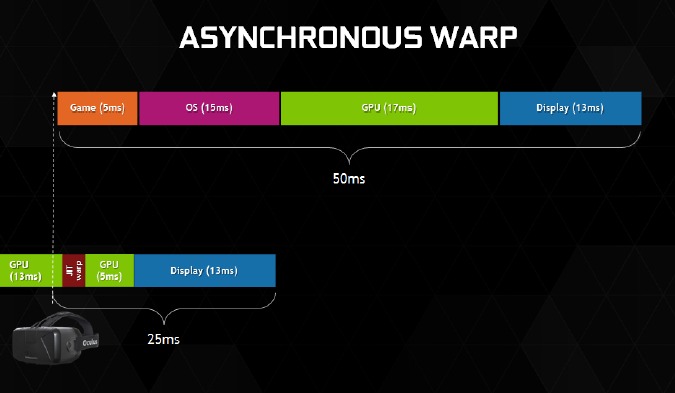 Yet another enhancement to VR gaming is how GPUs handle the multi-GPU configuration. Traditionally SLI relied on alternate frame based rendering where each GPU handled odd or even frames respectively. To further lower latencies and deliver better performance, VR SLI will rely on each GPU to dedicatedly render per display (in essence the display for each eye).

VR will also work hand-in-hand with DSR to boost gaming quality on existing VR displays. As such VR DSR is a sub feature for the VR Direct suit of improvements.

That about sums up our last key feature of the second generation Maxwell architecture of the GM204 chip. To reiterate, both VXGI and VR Direct are forward looking features that aren't yet implemented in existing games for us to review these aspects. Meanwhile, DSR and MFAA work on any game provided that the GeForce Experience software layer is updated to its latest version to ensure its database of games and visual settings recommendations are sound for your hardware. Next, you'll want to know how the best of the newcomers perform, so check out our revised performance review of the GeForce GTX 980 graphics card.