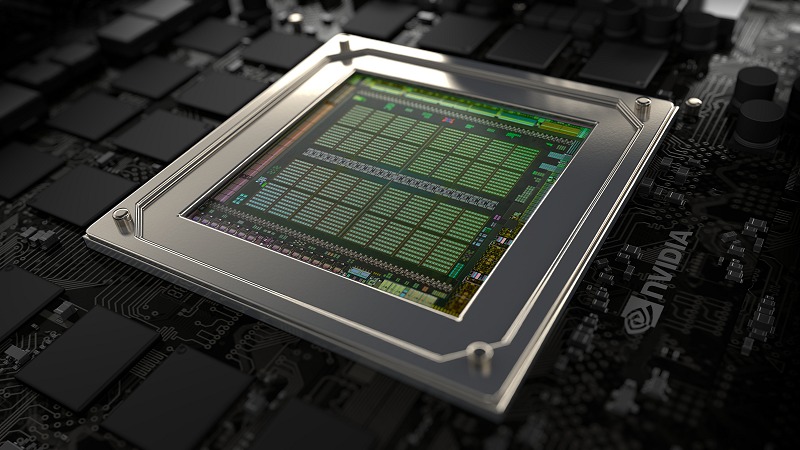 Maxwell strikes again, but this time NVIDIA has supercharged the architecture with new features to ensure it would stay at the top of its game for some time to come. It's also clocked much faster than its predecessors, breaching the 1GHz mark for GPU clock speeds and has 4GB of high speed GDDR5 memory to tackle gaming at 4K resolution with ease. Bearing the Maxwell architecture, it's also more power efficient than any of its predecessors.

Call it a 'Maxwell Refresh' if you will, for those who are keenly following the updates in the graphics card segment, you would recall that NVIDIA actually introduced the original Maxwell architecture to rejuvenate its low-end series with the GeForce GTX 750 Ti and the GTX 750. In official documentation, these GPU models were classified as "Maxwell first generation" that focussed on power efficiency and greater performance per watt than Kepler.

So why did Maxwell first debut at the low-end?

As was revealed in CES 2014 when the Tegra K1 debuted, all of NVIDIA's new generation GPU architectures will be designed to scale in performance and capabilities that's fit for mobility needs, all the way to workstations and servers. Prior to the this, the GPU design for mobile and embedded computing evolved in a separate and outdated path, requiring distinct teams to be working on Tegra and GeForce product groups. With the internal direction change and consolidation, NVIDIA achieved two things: - firstly, this brings updated and advanced graphics APIs to mobile game developers for more realistic gameplay and easily allowing more desktop games to be ported over to the mobile OS equivalents with ease. Secondly, NVIDIA can collectively progress its graphics engineering forward that would benefit all its product groups collectively, thus working more efficiently too.

This led to the introduction of NVIDIA's then new Maxwell first generation that focussed on power/design efficiency and refreshed its low-end GeForce line-up.

Half a year on, today, Maxwell second generation arrives and it powers the brand new GeForce GTX 980 and GTX 970 top-end graphics cards brimming with new features and technologies.

Before we march on with the key specs of the new generation gaming cards to lust for, we'll briefly touch on the new technologies that the Maxwell second generation brings to the table - some of which strengthen the next evolution in gaming, while others focus on delivering even more with existing graphics horsepower.

We'll be covering these features in great detail over the next few pages.

Getting down to business, the new GM204 GPU used for the GeForce 900 series is based on the 28nm manufacturing process, similar to the original Maxwell architecture on the GM107 chip that debuted on the GeForce GTX 750 Ti. This time round, the Maxwell second generation architecture builds on the breakthroughs of the GM107 such as high power efficiency that was derived from both the die shrink from Kepler and of the newer internal reconfiguration of the processing blocks deep within the core. For example, the Kepler streaming multiprocessor (SM) unit has 192 CUDA processing cores, but the newer SM on the GM107 (and the GM204) feature 128 CUDA cores which are easier to address and manage because they correspond to the power 2 and thus are more efficient to utilize. Also, unlike Kepler, each SM in Maxwell is further partitioned into four processing blocks of 32 CUDA cores, each with its own control logic (instruction buffer, schedulers, dispatch units and registers). The overall result is an improved and more efficient datapath organization which simplifies scheduling logic, reduces idle time and less time spent waiting for instructions, thus putting the processing cores to better use. 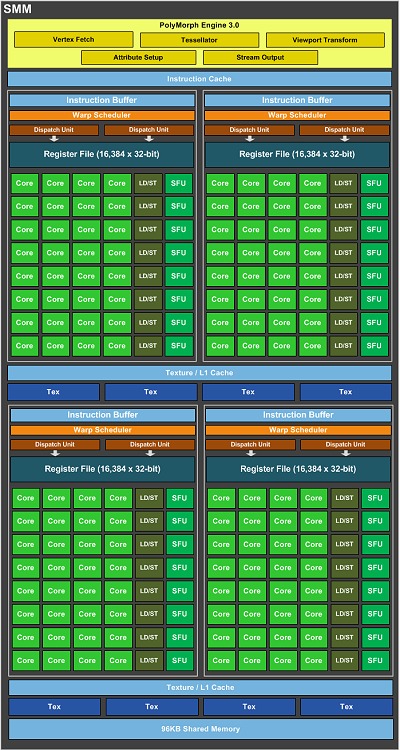 But that's about the similarities between the GM204 and the GM107 Maxwell-class cores. The structure and improvements made to the GM204 are multi-fold to ensure its a true performance oriented part, but with the bonus goodness that is common for all Maxwell generation GPUs.

Even so, if you pause to consider the naming scheme of past GPU chips, you would realize the the "GM204" naming signifies that it's one rung lower than the top tier GPU model. For example, the Kepler architecture for the GPUs debuted as the GK104 with the GeForce GTX 680 and a more power packed revision came about later with the GK110 chips that was featured on the GTX Titan, GTX 780 and the GTX 780 Ti. As such, NVIDIA's own documentation has squarely compared the new GTX 980 against a more appropriate previous generation GTX 680 than the GTX 780 / 780 Ti. Would this mean the new GeForce GTX 980 is actually slower than the current class leading GTX 780 Ti? Let's take a look at the fully configured GM204 SKU for the GeForce GTX 980. 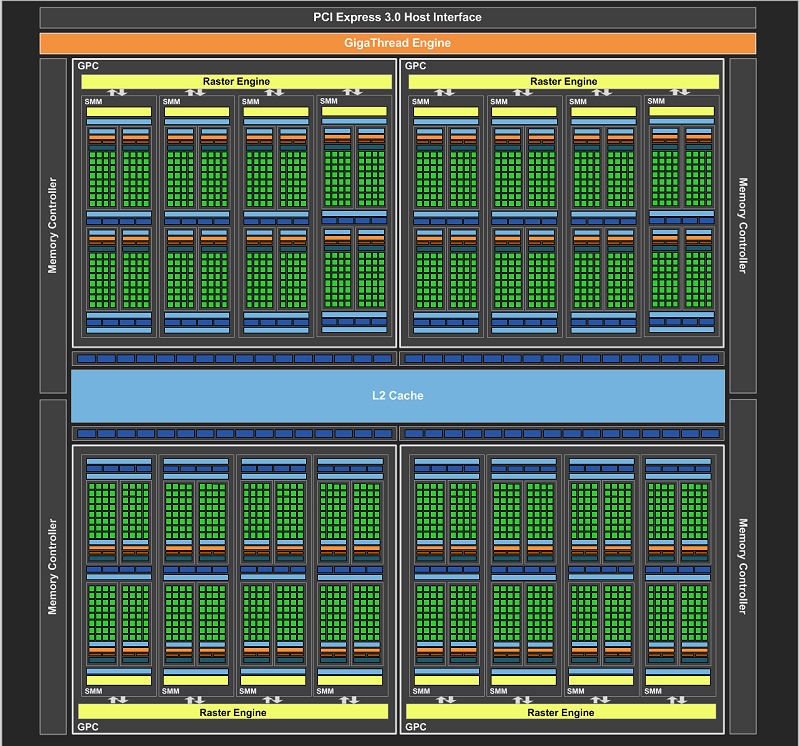 Like the Kepler GK104 (and older predecessors), the new GM204 also boasts four Graphics Processing Clusters (GPC). In essence, each GPC is an independent block of processing engines that can exist on its own as it contains all the necessary processing stages within its cluster. A full complement of four GPC units round off the GM204's full firepower with double the number of streaming multiprocessors that are also clocked faster (base clock alone is 1,126MHz on the GTX 980), double the ROP units and quadruple the L2 cache size than the GK104. So instead of a pair of 'heavy' SM units per GPC on Kepler, the second generation Maxwell goes with the leaner SM units, but has four of them per GPC. Do the math and you'll get 16 Maxwell SMs (SMM) that combine to give the GM204 a grand total of 2048 CUDA cores on the fully equipped GeForce GTX 980 SKU. This is certainly no match to the GeForce GTX 780 Ti and the Radeon R9 290X that boast much more CUDA/shader cores, but they operate slower than the GeForce GTX 980.

Interestingly, the GM107 with its first generation Maxwell architecture has five SM units for its single GPC, but this structure wasn't carried forward in the GM104. If we were to make an educated guess, the higher tier GM200 GPU might easily boast this SM structure for all four GPCs for a total of 20 SMM units or even go as far six GPC clusters for their enterprise GPUs in Titan/Quadro/Tesla class products. But that story is for another day.

The memory subsystem for the GM204 is also geared to tackle higher speed memory with its 256-bit memory interface hooked up to 7Gbps GDDR5 memory that both the GTX 980 and GTX 970 boast - the fastest in the industry. Coupled with a larger L2 cache, there are less requests that would need to be serviced by the GDDR5 memory. There are also improvements to the implementation of memory compression with better delta color compression algorithms. Overall, the better caching and compression schemes ensure less bandwidth is used from writing less pixel data to the graphics memory. This should hopefully help the GPU to be more competitive despite the fact the GTX 780 Ti boasts 336GB/s of memory bandwidth while the GTX 980 comes in with a more conservative 224GB/s memory throughput just based on specs. 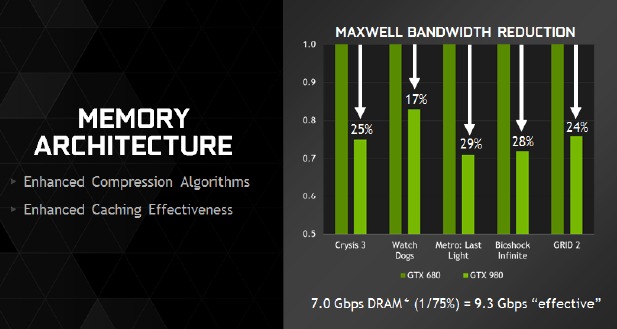 As for the GeForce GTX 970, it is very similar to the GTX 980, except that it has 13 SM units instead of 16 on the GTX 980. That means a reduction in CUDA cores (down to 1664) and texture mapping units (104), along with slightly lower clock speeds (base clock of 1050MHz). On the board level, the reference GTX 970 loses the ability balance power draw across its three power rails - something that first debuted on the GTX 780 Ti and continues to be featured in the GTX 980. As such, we don't expect the GTX 970 to hit as high an overclock as the GTX 980.

Speaking about power, it's interesting to note that the efficiency of the second generation Maxwell architecture has helped the GeForce GTX 980 and GTX 970 to boast a significantly low TDP of just 165 watts and 145 watts respectively - figures that are almost unheard of for a performance oriented parts. As such, you won't need more than dual 6-pin PCIe Molex power connectors to drive these graphics cards.

Here's how the GeForce GTX 980 and GTX 970 compare to the current stable of top performing GPUs:-

Beyond the improvements at the heart of the core, NVIDIA has updated its display output capabilities as the second generation Maxwell now supports 1,045MHz pixel clock as opposed to 540MHz on the previous generation. This allows it to scale up to support much higher resolution displays beyond 4K and in fact supports 5K resolution screens - 5,120 x 3,200 pixels @ 60Hz. The GeForce GTX 980 is also the first NVIDIA GPU to support HDMI 2.0, which now allows it to drive full 4K resolution at 60Hz. The reference card comes with 1 x HDMI 2.0 port, 3 x DP 1.2 connectors and a single dual-link DVI connector. Like Kepler, Maxwell can natively output to four digital displays simultaneously. But if that's not enough, the new Maxwell core is also able to drive four 4K MST displays by a single GPU (up from two in Kepler).

Pricing, positioning and availability of GeForce GTX 980 and GTX 970

Now that we're done with the technical aspects of the new GPUs, let's talk about the more practical aspects. The GeForce GTX 980 and GTX 970 will be available immediately worldwide and have a suggested retail price of US$549 and US$329 respectively.

At the same time, NVIDIA has officially chosen to discontinue the existing GeForce GTX 780 Ti, GTX 780 and the GTX 770. Given all the improvements to efficiency that the second generation Maxwell architecture boasts in these new GPUs and NVIDIA's direction to discontinue its previous top-end GPU models, this only signifies that the GeForce GTX 980 and GTX 970 are expected to perform as well as the GTX 780 Ti and GTX 770 SKUs respectively. Traditionally, NVIDIA has never made a deliberate mention of such positioning and change of hierarchy in previous GPU launches and they sort of usually coexist in the market for some time before the market self adjusts itself to the new products. As such, this only serves to reinforce the positioning and expectation of the newcomers.

Furthermore, the new lowered price points also signify that NVIDIA is quite likely to have a higher performing GPU (perhaps the GM200 or GM210) in the not so distant future which we discussed earlier.

Given the small technical differences between the GTX 980 and GTX 970, the latter seems to be quite a catch at just US$329 and we reckon it could be the new sweet spot given its capabilities. Speaking of sweet spots, with the coming of the GeForce GTX 900 series cards, the GeForce GTX 760 which was perched at US$249 will now shift to an even more affordable spot at US$219 - making it a true sweet spot for those with modest budgets. Again, this is a deliberate shift in positioning by NVIDIA and we reckon over time, there will be more changes to the existing GTX 700 series cards that aren't yet discontinued, or until new lower tier GTX 900 series SKUs are commissioned.

A close look a the reference GeForce GTX 980 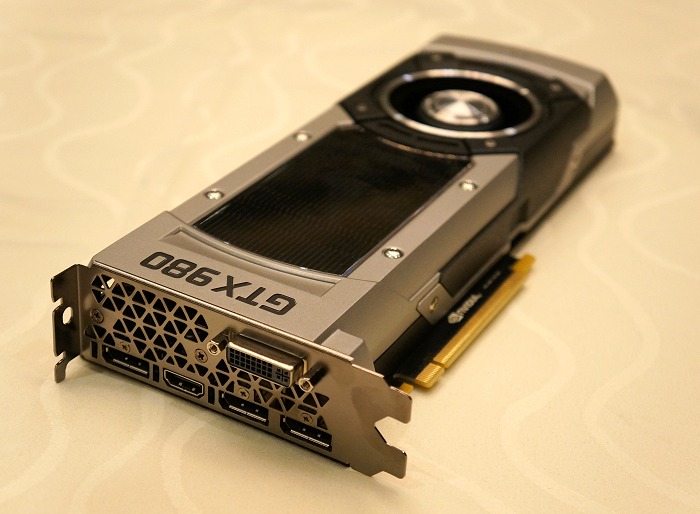 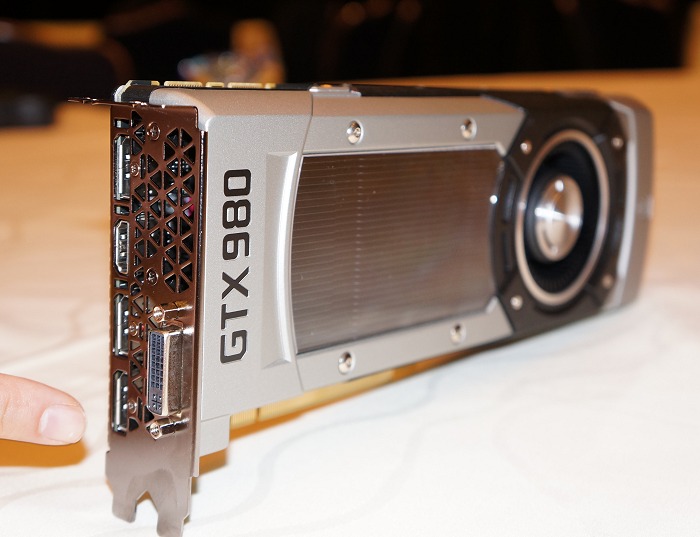 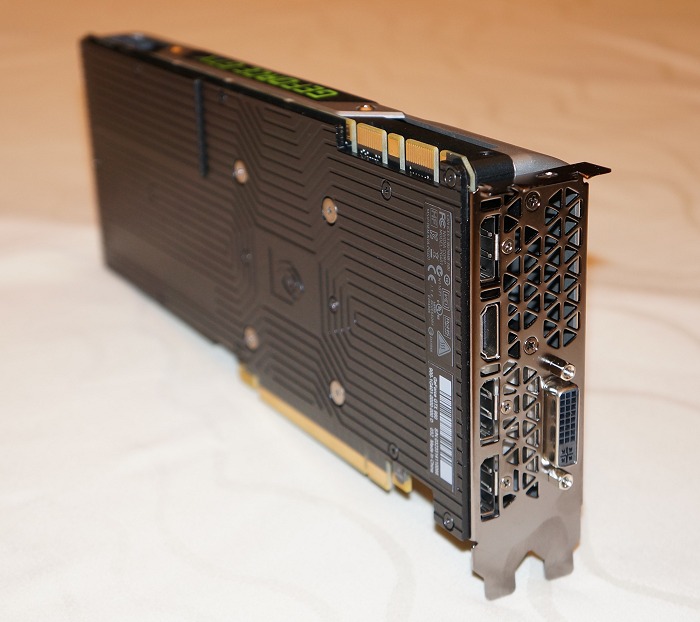 What we've covered so far are just the technical aspects and product positioning of the newcomers. Over the next few pages, we'll explore the key new features that are enabled by the improved GPU architecture and exclusive to the new GPU only such as DSR, MFAA, VXGI and VR Direct. So read on!

If you're looking for how the best of the newcomers perform, check out our revised performance review of the GeForce GTX 980.