NVIDIA's GPU Technology Conference (GTC) first kick started in October 2009 as the very first conference dedicated to programming and untapping the potential of the GPU. It was an eye-opening event for all attendees, us included. The most talked about highlight from the event was the unveiling of the Fermi (GT300) GPU architecture used in the GeForce 4xx series of products. However Fermi was nowhere near launch when it was first unveiled.

A year later and the Fermi architecture has only recently been gaining traction in a big way as NVIDIA launched the GeForce GTX 460 and the GTS 450 models aimed at the performance seekers without deep pockets (which the GTX 480 and 470 products demanded). Furthermore, NVIDIA has yet to unleash the Fermi beast with maximum processing capability. If you recall, the architecture allowed for up to 512 CUDA cores (or in legacy terms, shader processing cores), but the current top dog, GTX 480, comes with 'only' 480 cores. So it remains to be seen if NVIDIA can get top binned silicon to work with 512 cores and not cause a power outage when trying to run one of them.

In any case HardwareZone is back again attending the 2010 edition of GTC event. This year's event was once again held in San Jose, California. While the opening keynote by Jen-Hsun Huang mostly touched upon the GPU Computing and CUDA momentum, we'll touch upon the more exciting aspects for the techies first - the GPU Roadmap. 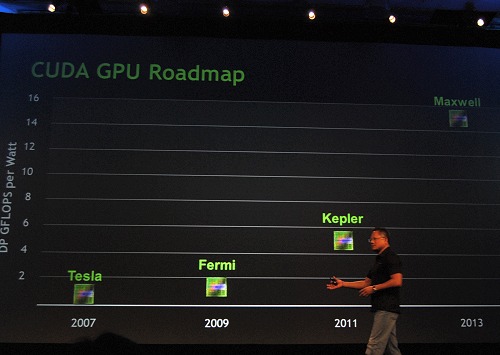 Here's a summary of what to expect out of not one, but two GPU architecture updates in the pipeline:-

One thing to bear mind is that the performance improvements aren't just because of the manufacturing process, but also from chip design changes, architectural improvements, more efficient software and more. These will vary in the years to comes, so take these figures with a pinch of salt. But overall, it's good to see far more efficient performance coming our way given that computing has long hit the power wall and it is ever more pertinent to design effectively to get the most out of hardware and technology at any one point of time.

In between the time span of Kepler and Maxwell, NVIDIA will be introducing more enterprise oriented features in the GPU such as virtual memory, pre-emption and more.

Another juicy tidbit revealed was the midlife refresh for the Fermi class of GPUs, or what Jen-Hsun coins it as the midlife 'kicker'. It should refresh the architecture a bit to keep it going well through next year and it is expected sometime early next year. Perhaps this is when the 512-core edition of a Fermi-class GPU would see light. Whatever it may be, the next refresh and future new architectures should ideally have a full set of GPU SKUs out in the market within three months of introduction. Fermi of course was an exception due to production delays as Jen-Hsun admitted, but he feels the upcoming products should have a much smoother launch and availability.