FisrtPacket technology is the first of the new networking enhancements that the nForce 500 MCPs carry. In NVIDIA's own words, FirstPacket is essentially packet prioritization. Think along the lines of D-Link's DGL-4300 GamerLounge Wireless 108G Gaming Router and you'd have a pretty good idea on what FirstPacket technology intends to do.

It is true that broadband is becoming more accessible and bandwidth limits are increasing progressively. However, pumping in more bandwidth isn't the only solution to a smoother networking experience. Basically, there are two types of applications in a network, the latency tolerant ones that benefit from increased bandwidth, like FTP or web-browser transfers where continuous full frames are sent and received. Then there are the applications that usually send small data packets and do not require much network bandwidth, but very sensitive to latency and reliant on synchronization between client and server, much like network games, VoIP applications or audio/video streaming. Most avid on-line gamers will usually tell you that they turn off almost all other network software (Instant Messaging, file sharing, e-mail) except those that are required by the game to play and communicate in order to get the best 'ping'.

This is essentially the same concept. In an idle system with little to no network traffic, latency is a non-issue since packets are sent as and when they are made available. However, if you were to play the same game with an FTP running, you will most probably run into increased latency and lag spikes, which can equate to a jittering effect in-game. This is because regular network hardware and software are unable to differentiate between latency tolerant and latency sensitive applications. They will all be treated in the same way and applications that send continuous large frames will choke up the network for latency sensitive applications.

How FirstPacket really works is to optimize the way applications utilize upstream bandwidth so as to give latency sensitive applications like games, VoIP and video streaming a smoother experience. NVIDIA's FirstPacket technology acts as the middle-man in the equation and virtually creates two data queues internally, the 'fast queue' and the 'slow queue'. This is very similar to the priority queues given to preferred customers at banks. The FirstPacket filter re-arrange the data queue giving priority to the data packets in the 'fast' queue so they go out first. Gamers will benefit most out of FirstPacket technology since a lower latency will effectively reduce 'lag' and allow them to react better. No longer will you bang your head with frustration as your '1337 skillz' are defeated by 'lag'.

Of course FirstPacket technology isn't only limited to the gaming crowd, the effects of reduced latency and increased application network performance will allow most users to multi-task in a network or on-line environment more effectively than before. File-sharing, video streaming and VoIP can concurrently be performed with lowered latency effects.

However unlike the aforementioned D-Link gaming router which analyzes gaming packets and prioritizes UDP/TCP and port traffic, NVIDIA's FirstPacket technology is more direct and simpler in implementation. Users are required to choose which applications are given access to the 'fast' queue and all network traffic generated by the said application benefits from FirstPacket. It doesn't actually worry about what data is sent, the type of packet involved or what ports are used. 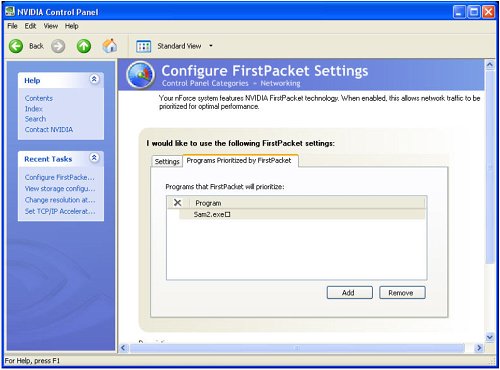 FirstPacket may not be too advanced or intelligent in this sense, but it allows the user to manage their networks more efficiently. However, It's great when you're just worried about the one or two games you're really having problems with, but if you live and breathe a networked life, setting FirstPacket profiles for all the applications you have will initially be a chore. Good thing, it is a one time setup.