NVIDIA has gradually improved the networking features of their core logic chipsets over the years, introducing the industry's only built-in Gigabit Ethernet and hardware firewall with the nForce 2, TCP/IP task offloading from the nForce3 onwards to full TCP/IP acceleration and hardware ActiveArmor Secure Networking Engine in the nForce4 and nForce4 professional.

The nForce 500 series will be the first consumer core logic chipset to feature two Gigabit Ethernet MACs on one chip. However, what NVIDIA calls their DualNet technology isn't just an excuse to one-up the competition in terms of numbers. The TCP/IP acceleration engine is available to both Gigabit links and it will be the first onboard consumer networking controller to feature high-end server-like capabilities such as teaming, load balancing and network fail-over. These features are only available on the nForce 590 SLI, 570 SLI and 570 Ultra. The nForce 550 only comes with a single Gigabit Ethernet MAC, much like the older nForce4s so it doesn't carry the DualNet features. 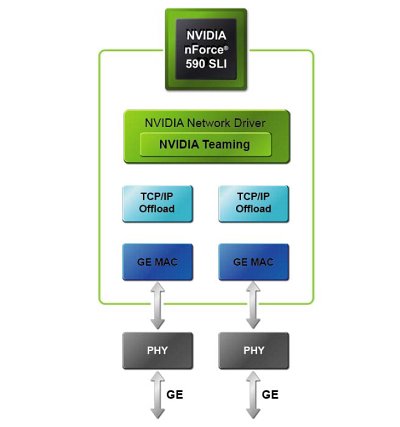 Both Gigabit Ethernet controllers within the nForce 500 series MCP can operate independently as separate ports or if you do need the bandwidth, they can be combined to form one fat two Gigabit pipe. This unique feature is called 'Teaming' (not to be confused with 'Bridging' where a PC with multiple network adapters can be used to connect different LAN segments). However, that is not all. An nForce 500 series MCP with teaming enabled is also capable of intelligent load balancing and fail-over features. 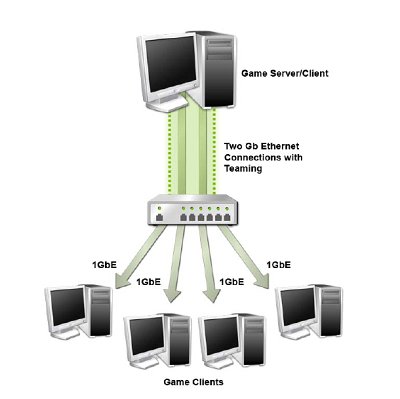 With teaming enabled, both the Gigabit Ethernet links still maintain their individual MAC addresses internally, though the teamed line share one IP address that is visible to the network. Due to this, the network driver is able to perform load balancing for both inbound and outbound traffic to optimize performance and utilization.

For outbound traffic, the network driver can assign the destination IP address to either one of the Gigabit links for transmission purposes and in the case that one link is idle, the driver dynamically adjusts the connections so that transfers are always balanced between the two links. Load balancing for inbound traffic is more straightforward and is performed through a steering distribution method. In the case of multiple server connections, the traffic from different servers are also load balanced and distributed within the two Gigabit links.

Lastly, the nForce 500 series MCP also supports fail-over functionality when teaming is enabled. If one of the Gigabit links malfunction, drop out or is disabled, the driver automatically switches over to the remaining link to maintain the network. If and when the disabled connection is reestablished, the driver will also be able to rebuild the teamed link and continue working. 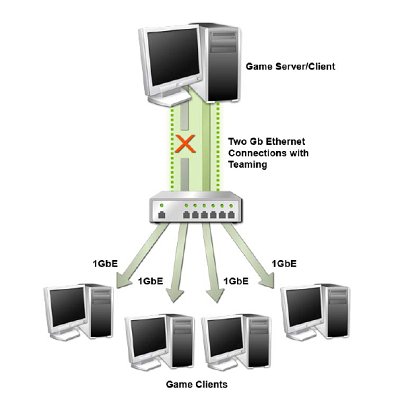 If you've looked at the specifications on the first page, you'd have noticed that NVIDIA has removed the ActiveArmor Firewall and Secure Networking Engine component of the MCP. After three generations of promoting a built-in firewall solution, they're suddenly none to keen on continuing down that path with the nForce 500 series. Apparently, the decision to drop ActiveArmor had something to do with Microsoft Windows Vista's updated networking and security capabilities. However, looking at the new networking features of the nForce 500 MCP, we'd take FirstPacket and DualNet over ActiveArmor any day so there is no love lost there.