In the past few weeks, we've previewed a few choice motherboards from ASUS, MSI and Gigabyte showcasing not only the new AMD Socket AM2 but also a taste of NVIDIA's next generation core logic chipsets the nForce 570 and nForce 590 SLI. Since we were then bound under NDA, we could not divulge any details regarding the new features and functionality of the chipset besides what could be physically seen on the boards itself. If you were excited to have seen glimpses of the motherboards, you've seen nothing yet. NVIDIA has removed the veil surrounding the nForce 500 series of chipsets and we'll be taking an in depth look at the technologies that make up the nForce 500 Media Communication Processors (MCP). 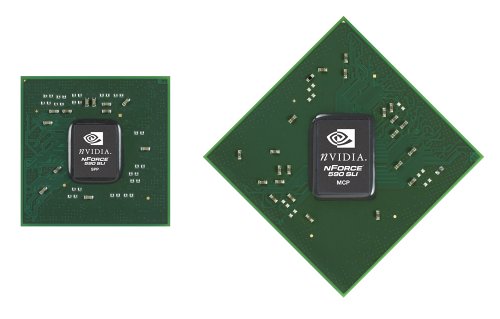 NVIDIA has refreshed its entire nForce core logic line-up and the nForce 500 series is looking to extend NVIDIA's lead in the chipset market. The nForce 500 chipsets will initially be launched for the AMD Socket AM2 platform with four different models: The nForce 590 SLI at the highest end with dual x16 PCIe SLI and additional performance features, nForce 570 SLI with toned down features and standard dual x8 PCIe SLI support, nForce 570 Ultra with single GPU support and the stripped-down mainstream oriented nForce 550. The following feature comparison table shows the major differences between the MCPs.

Looking at the table, you'd notice that the feature scaling and market positioning of the nForce 500 series is very similar to the current nForce 4. The nForce 500 MCPs still retain a 16-bit bi-directional HyperTransport link operating at 200MHz with a default link speed of 1000MHz at a 5x HTT multiplier. NVIDIA maintains their single chip design for most of the nForce 500 MCPs though the nForce 590 SLI will continue to use an SPP PCI Express bridge chip to deliver the extra PCIe lanes. What is interesting though is that the nForce 590 SLI has a total of 46 PCI Express lanes, six more than the nForce4 SLI X16, which incidentally explains how the Gigabyte GA-M59SLI-S5 (you can see the preview here ) is fitted with three PCIe x16 slots.

The rest of the nForce 500 MCP's updated features that we have already seen such as dual Ethernet MACs, six SATA 3.0Gbps channels are available. It is also nice to see NVIDIA embracing better onboard audio with Azalia HD Audio standard for the nForce 500, which means we can say good bye to crappy AC'97 for good. However, we'd like to draw attention to the mainstream nForce 550, which does not carry any of the enhancements found in the rest of the series. As far as specifications are concerned, the nForce 550 just seems to be a re-badged nForce4 Ultra for Socket AM2 with HD Audio support.

Besides sporting updated hardware components and CPU support, the main highlight of the nForce 500 series is actually a number of proprietary enhancements made into the core logic itself. The main features we'll be covering are NVIDIA's new LinkBoost, FirstPacket and SLI-Ready Memory technologies. We'll also look into the nForce 500 MCPs updated DualNet network functionality.