GP-GPU computing is just in its in infancy. The first GPU Technology Conference was held in 2008 (under the NVISION'08 branding) and it has gone from strength to strength. NVIDIA saw the future of GPU computing and threw its weight behind this momentum. The parallel processing engines inside GPUs make them ideal for a wide range of computing tasks where there is a massive need to calculate a string of similar data sets fast, removing them from their traditional roles in just graphical processing.

Fast forward four years to 2012 when GPU compute has advanced in terms of hardware and software developments. NVIDIA has since designed several new GPUs, most recent of which is the launch of Kepler whose architecture is the conerstone of power-efficient GPU computing platform. Kepler also has new features like Hyper-Q and Dynamic Parallelism to keep its performance ahead of its predecessor Fermi in the areas of GPU computing. Powering the new push for this year and the year ahead are the Tesla K10 and K20 GPUs which were unveiled in this conference and we spoke to the senior directors to understand its positioning and what it means to the research and scientific community. As the compute power of the GPUs grow ever higher, corresponding new services and features can be harnessed and that's exactly what we saw with GeForce GRID for using GPU processing capabilities over the cloud and other services.

In order to consolidate its foothold in the GP-GPU arena, NVIDIA created a more compute-friendly software development framework called CUDA. Its attempt to push GPU programming to higher level programming languages seemed to have borne fruit with CUDA in its fourth major revision, while its fifth revision (CUDA 5.0) is just on the horizon. NVIDIA labels its efforts in GPU computing as creating GPU computing ecosystems.

Such a label is somewhat appropriate as NVIDIA claims to have witnessed the organic growth in terms of the adoption of GPU computing by both commercial and non-commercial fronts. The company appears to be so confident of its foothold as we heard Dr. Sumit Gupta, Senior Director for Tesla GPU Computing, said that the main obstacle to the adoption of GPU-accelerated solution is inertia, and not competition from other companies. 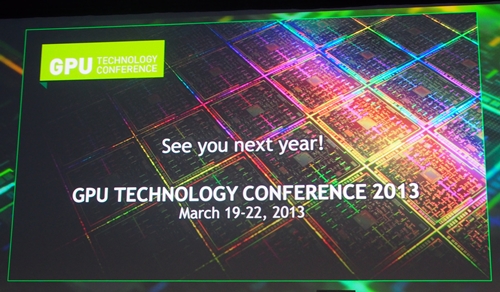 That about sums up the momentum and technologies shared and uncovered during our visit to NVIDIA's GPU Technology Conference 2012. If you missed out on some of the articles we've published in detail, we've got them consolidated for your reading pleasure:-