For those who’ve been attentively reading our content, you’ll realize that the "GRID" terminology sounds very familiar, and that’s because NVIDIA first discussed it their GPU Technology Conference 2012 in the form of a cloud technology called "GeForce GRID". Based on the VGX technology that helps virtualize computing environments and assists in addressing large sets of computing resources such as multiple shared GPUs from any node, this concept gave rise to to the GeForce GRID that tackles cloud based deployments as a broader technology arc.

Today at a pre-CES conference, NVIDIA unveiled exactly how it will accomplish this with the NVIDIA GRID - an actual NVIDIA branded, fully integrated server with 12 high-density GPUs, graphics application streaming software, and a NVIDIA VGX Hypervisor technology that allows multiple users to share a GPU. It is designed to serve out far higher quality gaming streams and at reduced latencies than the first generation cloud gaming systems (such as OnLive). 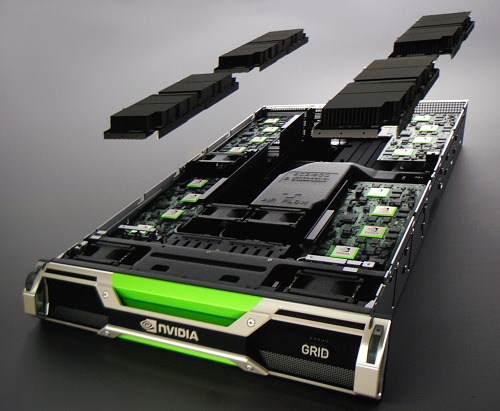 The idea propelling the NVIDIA GRID is that most users now have a multitude of services and applications available on the cloud that there’s not much of a need to install many core programs on the system. Yet, the vast area of video games has continued to live and function in a legacy manner. Of course, the main reason it wasn’t possible previously was the lack of compute power, internet bandwidth constraints, and issues with latencies. However today, all three aspects are taken care of, and NVIDIA has been busy working out the details and developing the ecosystem to help foster the next big change in gaming. Imagine when you can play any kind of game on any screen or device at any place and time - that’s the end goal. 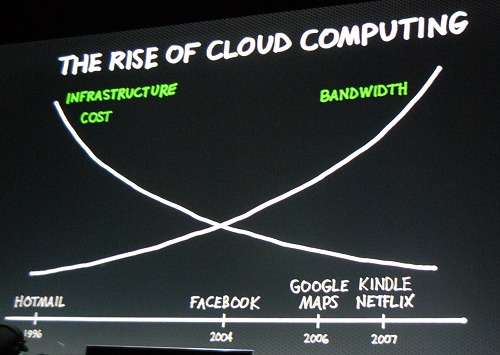 Combining an array of NVIDIA GRID servers in a rack (up to 20 of them), you get the GRID Gaming System. Check out the firepower it boasts: 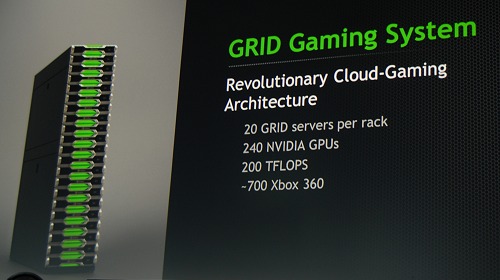 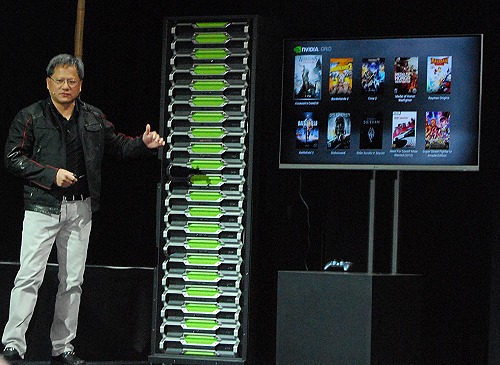 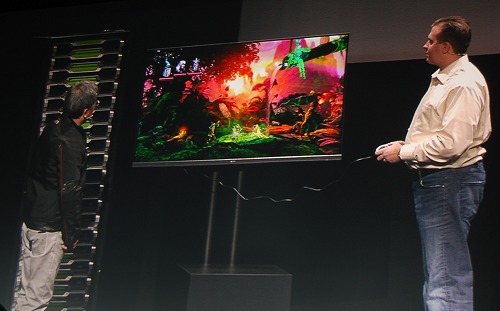 Trine 2 was the chosen game, and here’s yet another example of another NVIDIA technology coming into play (GeForce Experience) as the TV’s preloaded NVIDIA GRID client communicated with the server to inform the optimum game settings to be used for rendering the output to this TV set. NVIDIA also demoed this over a tablet by launching the installed client and letting GeForce Experience did its job to ensure optimal gameplay for the device is attained:

At the moment, NVIDIA is working with online game service providers like Agawi, Cloudunion, Cyber Cloud, G-Cluster, Playcast, and Ubitus to roll out this next generation of cloud gaming servers.