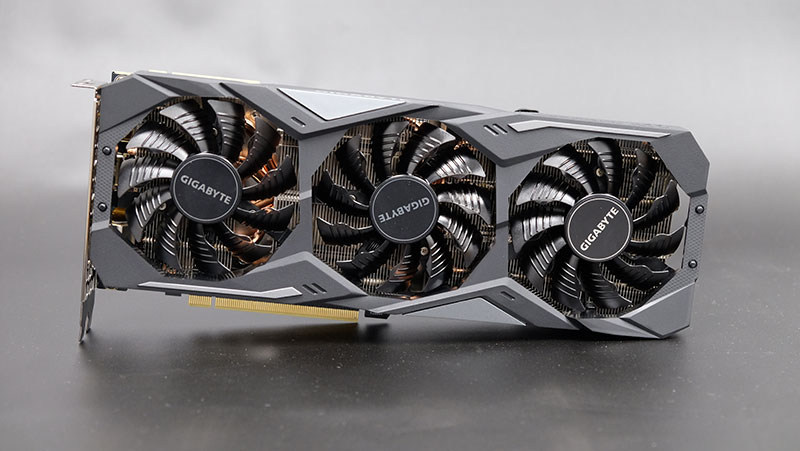 Gigabyte's GeForce RTX 2080 Super Gaming OC is one of the stealthier cards around. If you don't want your card lighting up your entire case, this might tickle your fancy. The only LEDs on the card are found behind the illuminated Gigabyte logo on its side, and the cooling shroud and fans are otherwise blissfully unadorned.

In addition, this is also the only other two-slot card in this shootout, along with the GALAX model. It's got a relatively slim footprint and an unintrusive design, so it's looking like a really good fit for those who just want to keep things low-key. At just under 30cm long, it should fit into most cases save for the smallest ones. 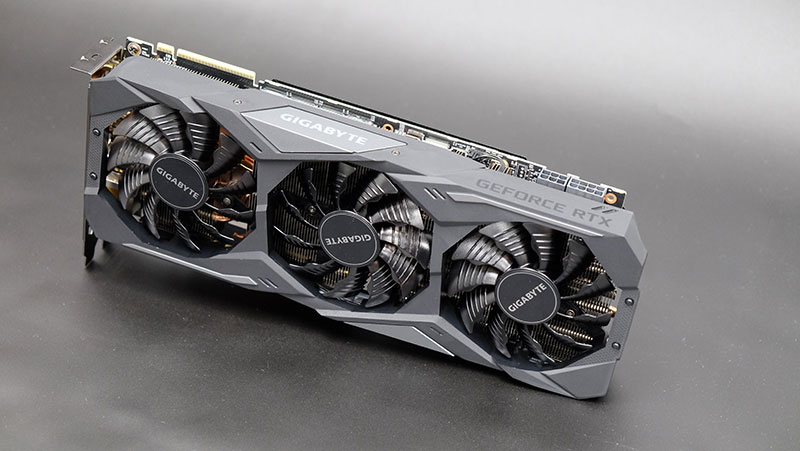 The highlight of Gigabyte cards have always been their WindForce cooler, and the WindForce 3X cooling system on this particular card features what Gigabyte refers to as "alternate spinning " fans. This isn't exactly a new feature, and it has shown up on previous Gigabyte cards before. That said, it's supposed to solve the problem of turbulent airflow, which can become an issue when you've got three fans. Each 82mm fan basically rotates in alternate directions, where the middle fan rotates clockwise while the other two rotate counter-clockwise. This ensures that the air between any two fans is flowing in the same direction, which improves static pressure and minimises turbulence. 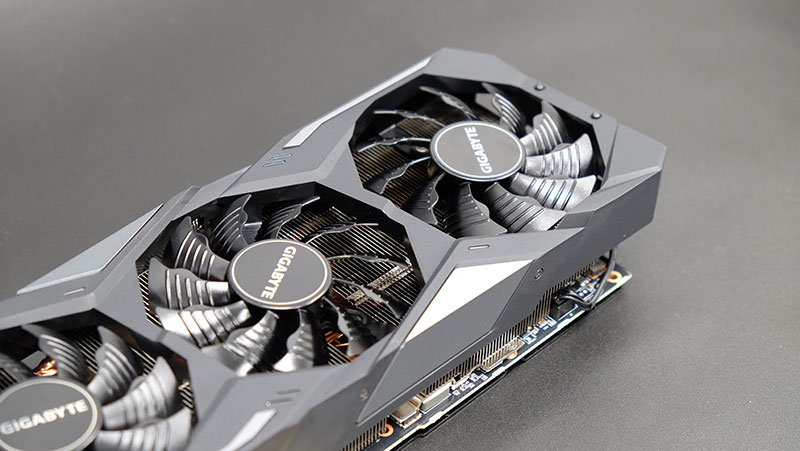 The fans themselves also feature a small, triangular protrusion on each fan blade. This is supposed to help guide the air over the ridges on the blade's surface and further enhance airflow. Of course, semi-passive cooling is supported too, and the fans will stop spinning entirely when the card isn't working as hard.

The heatsink itself is comprised of six composite copper heat pipes and a rather large finned array. The heat pipes are flattened where they come into direct contact with the GPU die, and there's also a separate metal contact plate around the GPU contact area that interfaces with the VRM and MOSFETs. The latter components are frequently neglected in favour of just giving the GPU coverage, but it's nice to see that isn't the case here. 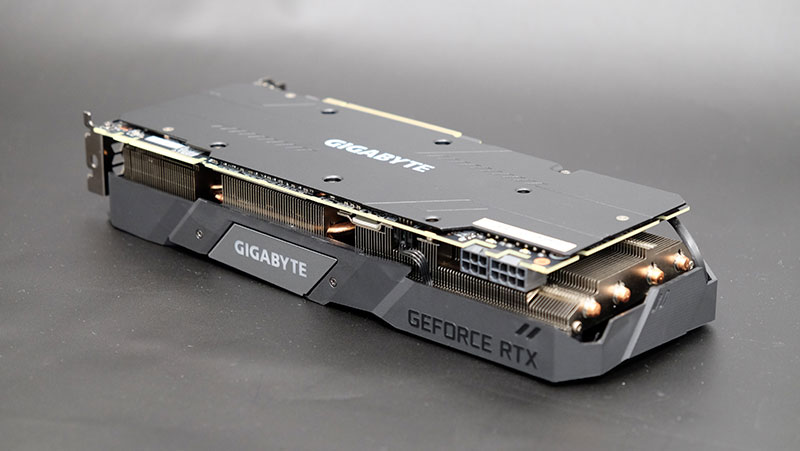 In fact, Gigabyte is also one of the few brands who have continued to rely on direct contact between the GPU and heat pipes. ASUS used to do this with its DirectCU II coolers, but it's also since switched over to a nickel-plated copper base.

Elsewhere, the Gigabyte GeForce RTX 2080 Super Gaming OC comes with a solid metal backplate that helps confer extra structural rigidity and prevent flexing of the PCB. This also comes with thermal pads of its own and so functions as a passive heatsink of sorts as well.

The card relies on a single 8-pin and 6-pin power connector, just like the Founders Edition card. There are also two helpful LED indicators on each connector that will let you quickly check if there's any issue with the PCIe power supply. How it works is slightly counter-intuitive at first, but it does make some sense. The light goes on when the power cable is disconnected, and turns off when there's stable power. They'll blink when something abnormal is detected. You might not want to have two extra LEDs on all the time just to signal that all is well, so that's probably why Gigabyte chose to leave the LEDs off when everything is working well. Round the back, the card has three DisplayPort 1.4, one HDMI 2.0b, and one USB-C VirtualLink outputs.