The full line-up of graphics cards are listed in the comparison table below and all were tested on ForceWare 441.12 driver edition.

Next up, here's a list of all the benchmarks used. I've already run through a wider range of tests in my analysis of how the GeForce RTX 2080 Super Founders Edition stacks up against other GPUs, so I'll just be going through a more limited selection for this shootout focussed on the same GPU across all the brands we've gathered:

I used the Fire Strike Extreme benchmark and stress test in 3DMark for the temperature and power consumption tests respectively.

All the cards were pretty much neck-and-neck in 3DMark, which isn't really surprising. Minuscule differences in clock speeds aside, they're all based on the same GPU after all. At the most, the differences come up to just under 3 per cent. The same goes for Deus Ex: Mankind Divided, where the similarities in performance were perhaps even more stark than 3DMark shows at first. All the cards were within a frame or two of each other, and for all practical intents and purposes, their results can be described as pretty much identical.

The results were remarkably consistent in Metro Exodus too, further proving that clock speeds don't really matter and that they're hardly a reason to pick one custom card over another. Shadow of the Tomb Raider doesn't bring anything new to the table either, and the results are once again unremarkably similar across the board. While the ASUS card may have the most aggressive clock speeds of the lot, it's hardly the top performer across all the benchmarks. The ASUS card had the best cooling performance of the lot and was the only card to dip below 60°C. Conversely, the GALAX had the highest temperatures, while everyone else hovered around the mid-60s. When it came to fan noise, they all were quite a bit quieter compared to the Founders Edition model. 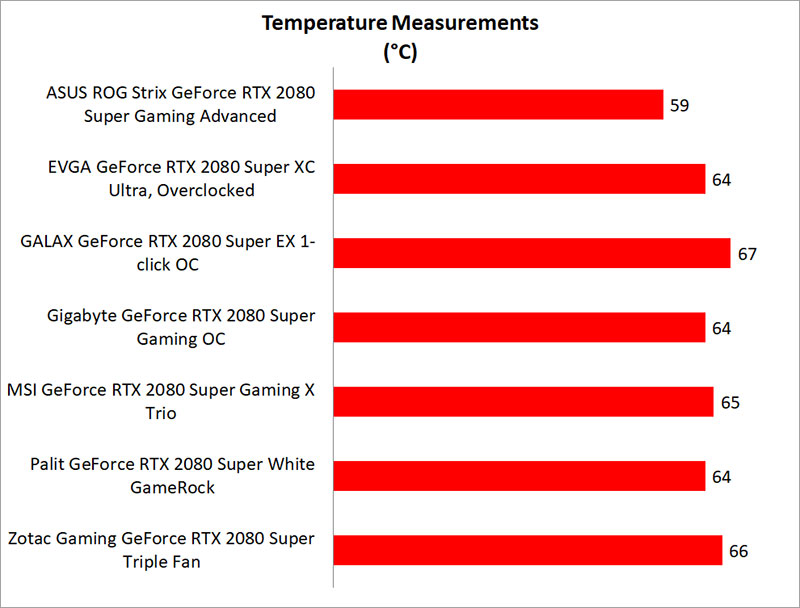 Overall, the cards don't seem to take too well to overclocking. The biggest increase I saw was a meagre 2 per cent, and what's odd was that that was on the GALAX card that didn't even register any change in clock speeds compared to its original 1-click OC values. And despite achieving the highest overclock and being the only card to break 1,700MHz for its base clock, the Gigabyte GeForce RTX 2080 Super Gaming OC registered barely any improvement at all.

Put simply, don't buy one of these cards and expect to squeeze out a ton of overclocking headroom. It's also clear that overclocking is hardly a differentiating factor when it comes to deciding between the cards, and it's really coming down to cooling, design, and price.