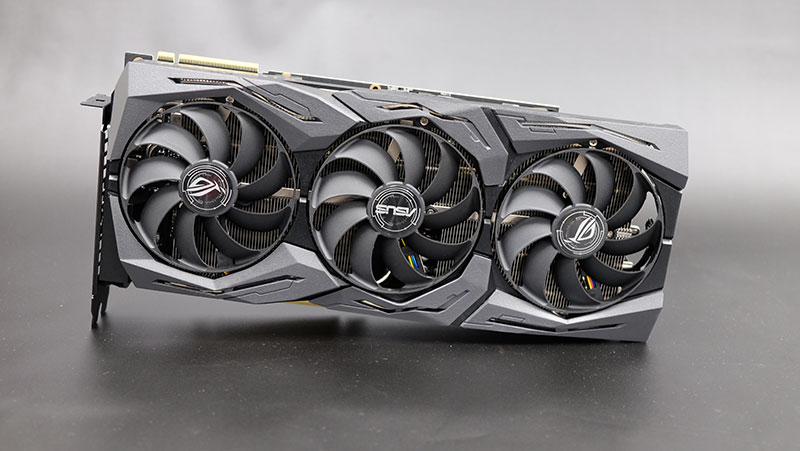 The ASUS ROG Strix GeForce RTX 2080 Super Gaming card is very similar to previous cards I've reviewed from this series. This is a premium card that’s been crammed with nearly everything you could want, and it comes with a couple of unique features that help to improve the overall user experience. However, the cooler design hasn't changed, and you still get three "axial-tech" fans and a faceted shroud with RGB LEDs set into the edges.

This is one of the heaviest cards in this shootout, but it's also one of the most solidly built. The plastic shroud feels really well put-together, and there's an additional metal brace that wraps around the card to prevent excessive torsion and lateral bending of the PCB. This brace is mounted to both the backplate and the I/O shield, so it's fully integrated into the card's design. 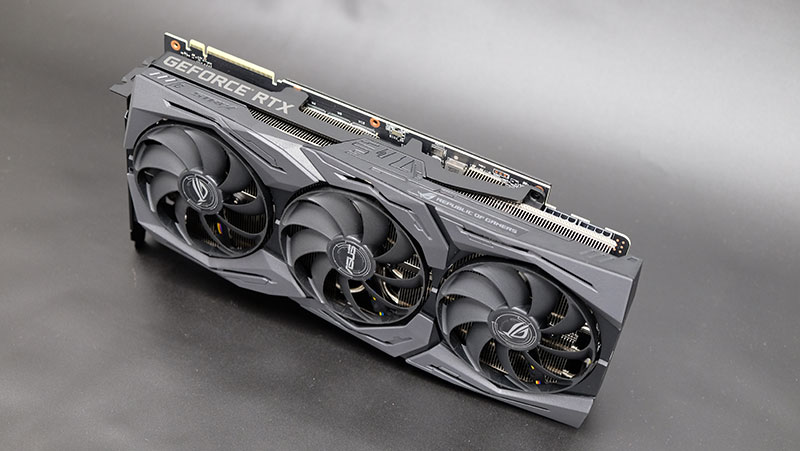 But a card like the GeForce RTX 2080 Super could always do with some robust cooling. To that end, the ASUS card sports six heat pipes and a massive finned heatsink that occupies nearly a full three slots. This helps ASUS maximise the total surface area available for heat dissipation, and the extra thermal headroom allows the fans to run at lower speeds in less demanding scenarios.

The heat spreader that comes into contact with the GPU die was manufactured using ASUS' MaxContact Technology, which makes use of precision machining to create a surface that is flatter and more even. This means more contact area available between the GPU and the heat spreader, which translates to more efficient heat transfer. A separate surface interfaces with the VRM circuitry – it uses a 10+2-phase design – via some thermal pads, so ASUS hasn't neglected those crucial components either.

The three axial-tech fans provide higher airflow and greater static pressure. These fans also have a smaller fan hub to allow for longer blades and a barrier ring that increases structural integrity and downward air pressure so air can be pulled over the thick heat sink more effectively. Furthermore, they are IP5X dust-resistant and the numbers in the results page will speak to just how well ASUS’ entire thermal design works. 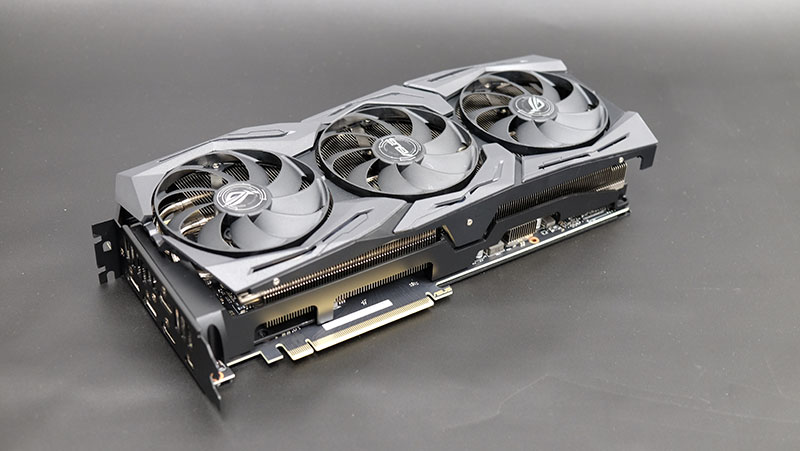 The fans support semi-passive operation too, so they'll stop spinning entirely to reduce noise when the GPU temperature is below 55°C. This technically only works in Quiet mode, which is one of the two BIOS modes that the card ships with, but you can enable this in Performance mode if you have the GPU Tweak II software installed. The BIOS switch is located near the PCB edge under the fan shroud and heatsink array, and it's a way to toggle between the two modes without having to go into the software. That said, I can only really see this being useful for enthusiasts using the card in an open test bench, and it still seems a lot easier to download software than remove your side panel just to flick a switch. 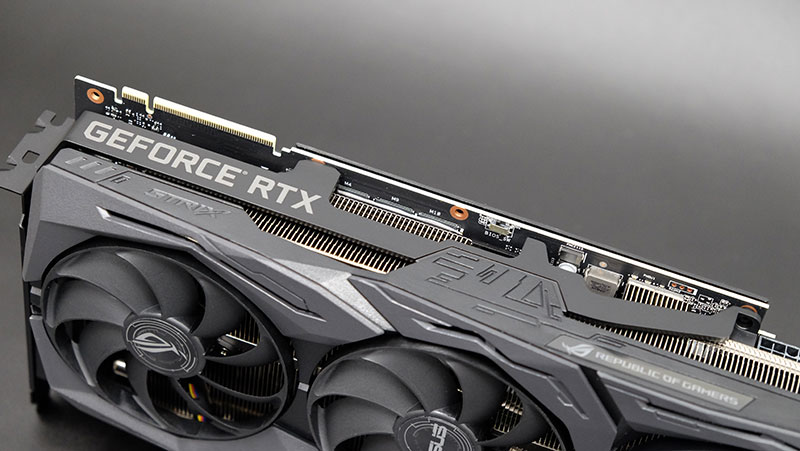 Either way, the main difference between the two modes is mostly the fan curve, with Quiet mode offering a less aggressive curve for more silent operation. If you're sure that less noise is your top priority right from the outset, you can set the switch to Quiet mode before installing your card.

Speaking of hardware switches, there's also a dedicated button for turning the LEDs on the card on and off. The button is nestled under the backplate, and it's useful if you need to go dark quickly. But once again, it seems more useful in an open test bench scenario. The RGB effects can be customised using ASUS' Aura Sync software, and synced to other devices in the same ecosystem.

In terms of clock speeds, this is one of the highest clocked cards around right now, with a 1,680MHz base clock and 1,890MHz boost clock in OC mode. However, as I mentioned earlier, the slightly higher speeds don't really translate to tangible real-world gains. In addition, you have to leave the GPU Tweak II software running in order to enable OC mode, and I wish it would just be enabled by default.

The card requires two 8-pin power connectors, compared to the single 6-pin and 8-pin connectors on the Founders Edition and some other custom cards. Each power connector also has a white LED that signals that a secured power connection has been established, which can come in really handy when troubleshooting. At the end of the card, you'll also find two 4-pin fan connectors that will let you peg your fans to your GPU temperature and an RGB header for hooking up an LED strip to the Aura Sync software. 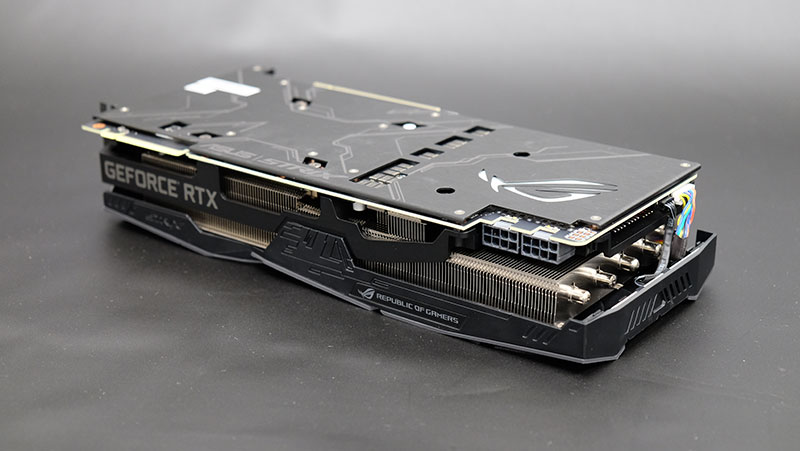 Round the back, ASUS has opted to trade one DisplayPort connector for an HDMI port, so the card features two HDMI 2.0b and two DisplayPort 1.4 outputs, in addition to a USB-C port. 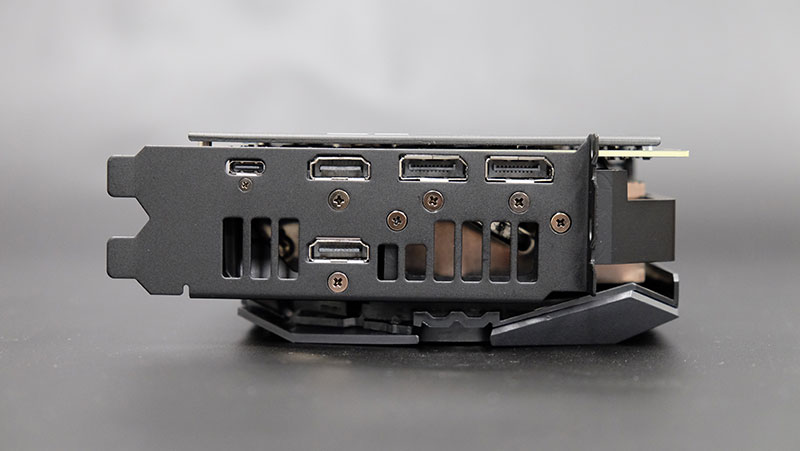