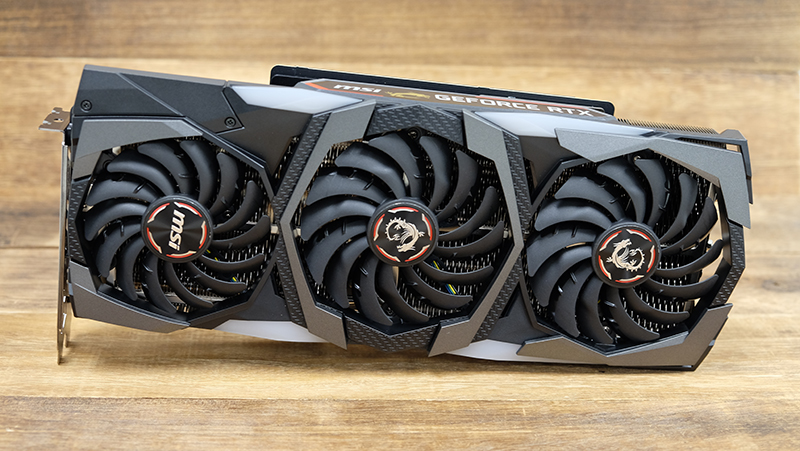 MSI’s GeForce RTX 2080 Gaming X Trio is a card that wants to be noticed. Out of the box, the Gaming X Trio is already awash in the colors of the rainbow, so it’ll go really well with any multi-hued rig. Of course, you can also customize the colors and lighting effects in MSI’s Mystic Light software and sync it with other compatible RGB components.

But what’s interesting about the card is really it’s cooler design. As on its GeForce GTX 1080 Ti Gaming X Trio, MSI has gone with a similar asymmetrical fan layout, where the fan closest to the display outputs is smaller than the other two. The three Torx 3.0 double ball bearing fans come with special protrusions on their edges that help focus airflow and direct it downward for higher static pressure. 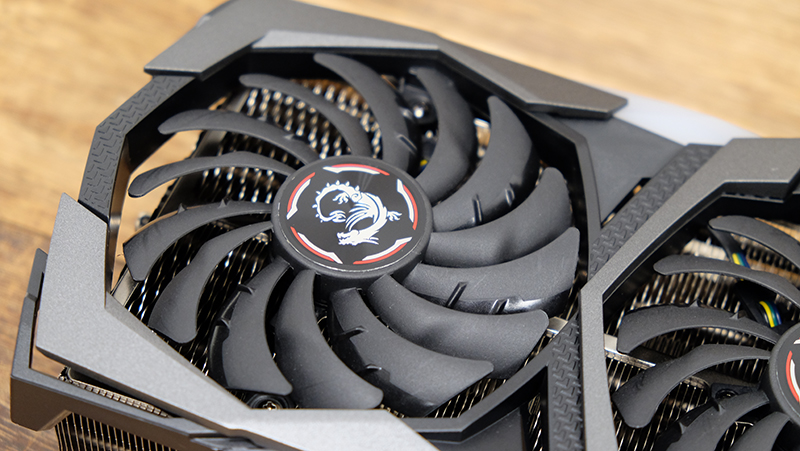 These fans are really quiet as well, so I don’t see noise becoming a problem. Unlike the fans on the ASUS card however, these default to a semi-passive mode of operation, and you’ll have to enter MSI’s Dragon Center and toggle it off if you want them to remain active always. 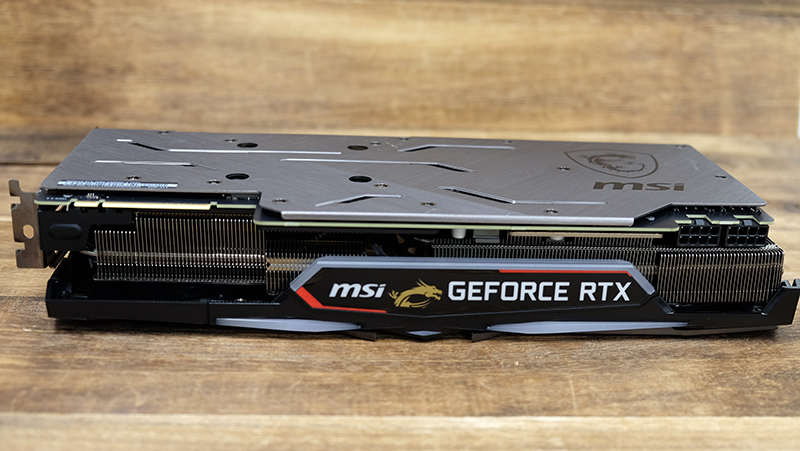 The seven copper heatpipes make contact with a nickel-plated copper base plate that channels heat away from the GPU and transfers it to the heatpipes and the aluminum heatsink. In addition, MSI says it used a premium thermal compound to further optimize heat transfer.

On the reverse side of the PCB, a diecast metal sheet serves as a passive heatsink for the memory modules. It also provides additional structural reinforcement to prevent flexing and is connected to the I/O bracket at the rear. 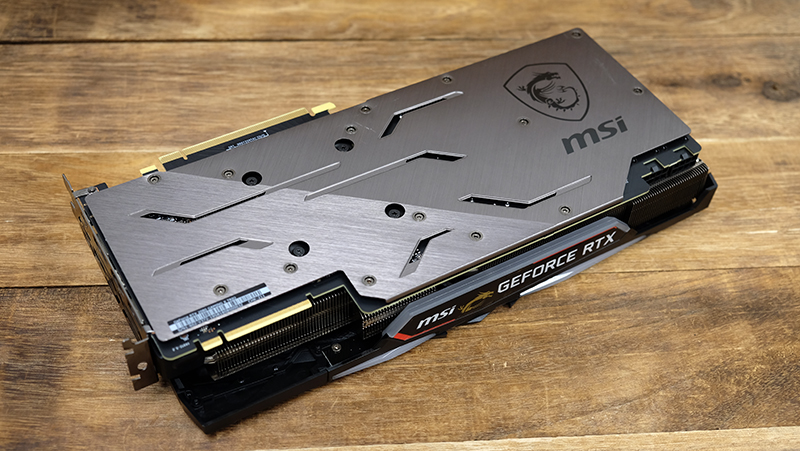 Structural integrity is truly important when it comes to a card of this size and weight. The GeForce RTX 2080 Gaming X Trio measures a good 327mm long and requires a 3-slot allowance. In addition to making sure you’ve got space in your case, you’ll want a certain reassurance that the GPU won’t sag over time. To help with that, MSI has included a GPU brace in the box that attaches to an empty expansion card slot and supports the card along its entire length. I'm not a fan of the design of the brace though, and I wish it had a more subtle look. 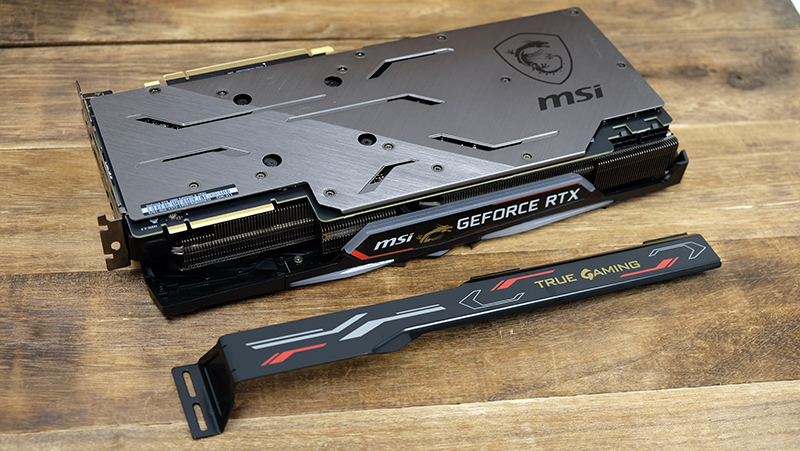 The selection of display outputs on the card is the same as on the Founders Edition model, comprising three DisplayPort, one HDMI, and one USB-C connector. However, MSI upgraded the power connectors to two 8-pin plugs, just like what ASUS did on its ROG Strix card. 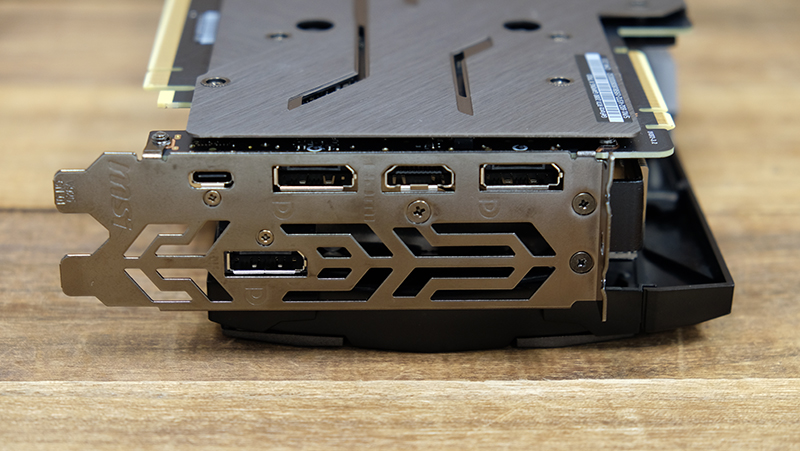 One final point to mention is MSI’s thoughtful approach to the NVLink connector. You can actually remove a portion of the cooling shroud (it’s held in place by screws) in order to make room for the NVLink bridge. I like this design, as it gives the cooler a more seamless look for the vast majority of gamers who don’t have a second card, while still supporting those who do want to go down the SLI route. 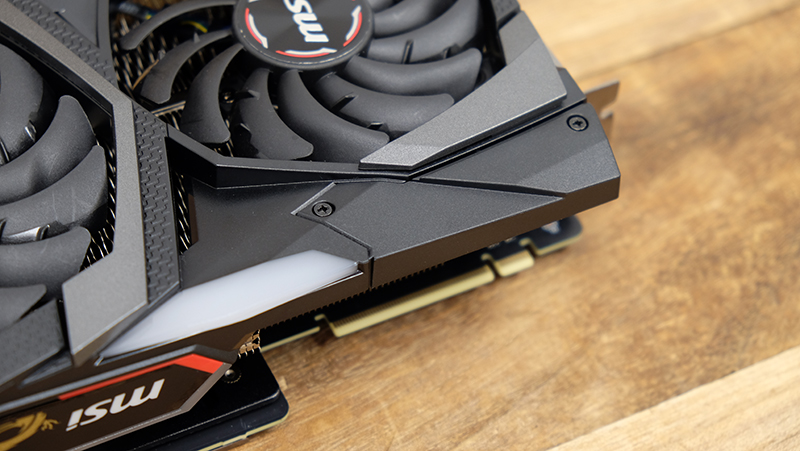