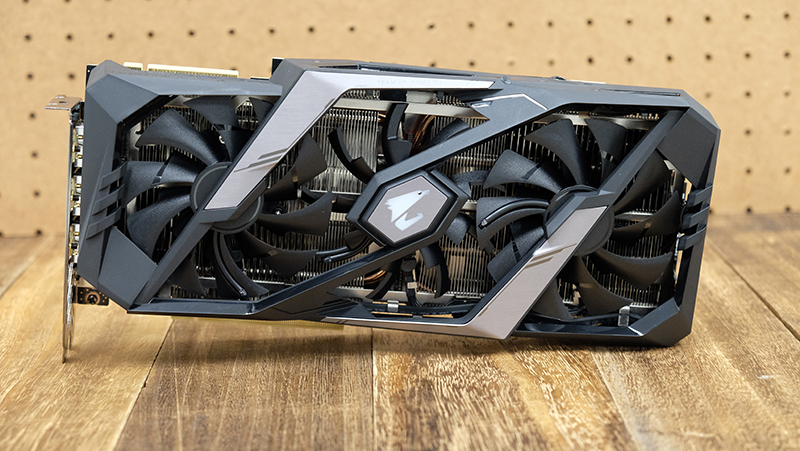 The Aorus GeForce RTX 2080 Xtreme 8G may be one of the most overengineered cards in this shootout. It sports a massive triple-fan cooler and more video outputs than you could possibly need, so it already makes for a pretty imposing sight at first glance.

You’ll need a three-slot allowance for this card, and it measures a good 59.9mm thick. A lot of that width is dedicated to the beefy cooler, which houses three 100mm fans in a stacked configuration. This means that the middle fan is slightly recessed and partially overlaps with the other two, a design that helps Gigabyte cut the length of the card down as well. It measures just 290mm, compared to the MSI GeForce RTX 2080 Gaming X Trio’s 327mm. 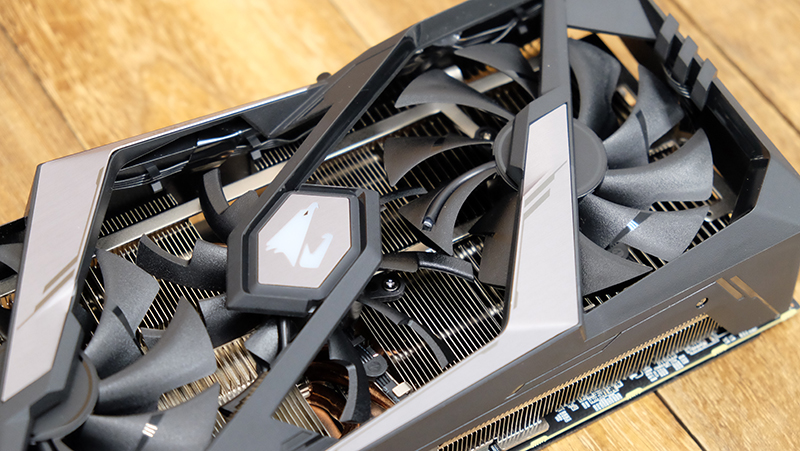 This could be the difference between leaving a front drive bay in place or having to remove it, and I do appreciate Gigabyte’s more compact design. 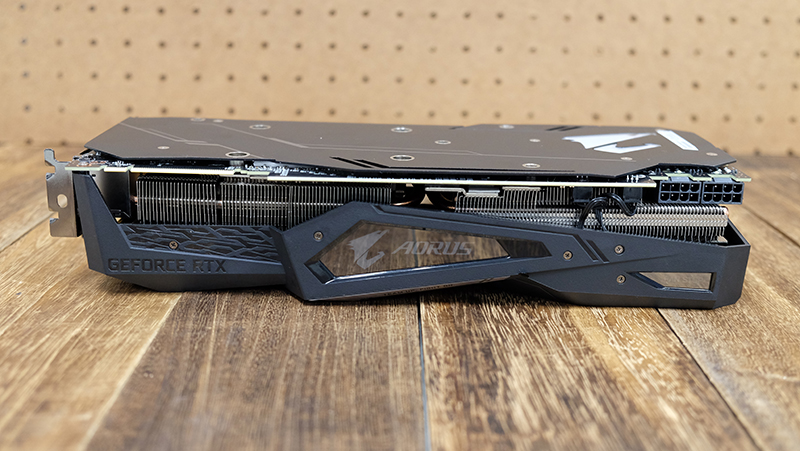 However, the stacked fans also help improve cooling performance. The middle fan spins in the opposite direction from the other two, which reduces air turbulence because air will now flow in the same direction between each fan. According to Gigabyte, this helps increase static pressure and improve the efficiency of heat dissipation.

The fans are also double ball bearing spinners that should last longer than their sleeve bearing counterparts. In addition, they support semi-passive operation, and will spin down when the GPU isn’t working that hard. Gigabyte has set the temperature limit at 60°C, below which the fans will stop spinning. A small LED "Fan Stop" indicator will also light up to let you know when the fans are idle.

Gigabyte has tweaked the design of its heatsink fin as well. The heatsink features angled fins of unequal height, which supposedly help channel air through the fans and increases the surface area available for heat dissipation. 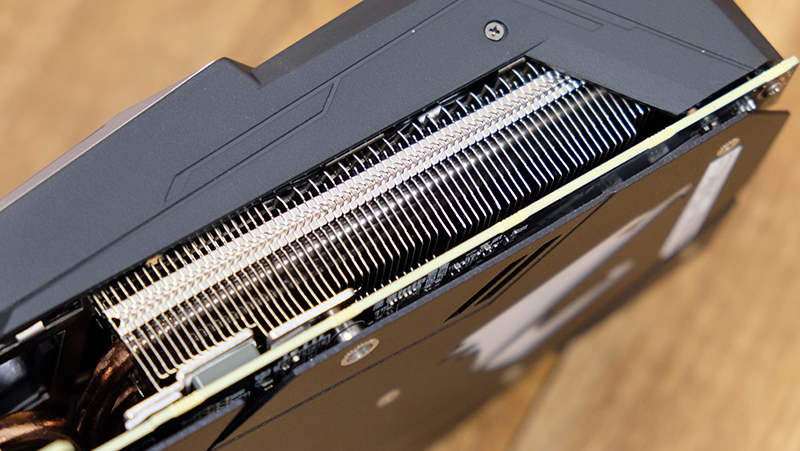 A total of seven copper composite heatpipes come into direct contact with the GPU, and they also help draw heat away from the VRAM modules via a large metal plate. 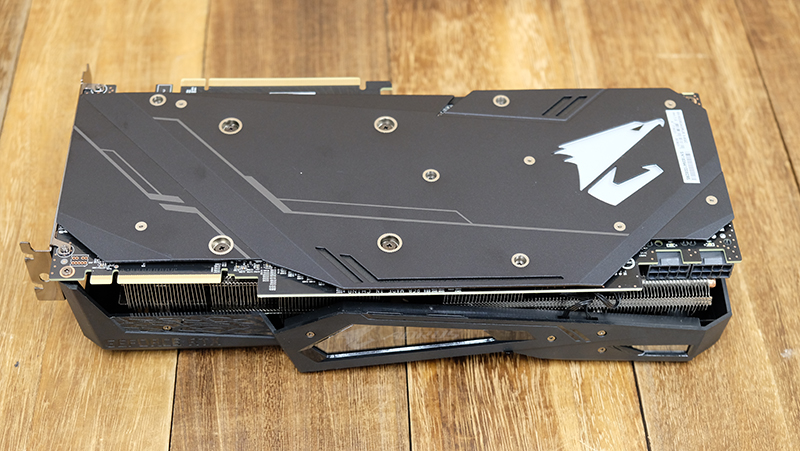 The RGB lighting effects on the card are also pretty cool. They’re different from what most other cards go with, and instead of the fan blades appearing as a blob of color, the fans themselves are ringed with what is best described as dashes of light. You can customize the lights to suit your preferences using Gigabyte’s RGB Fusion software. 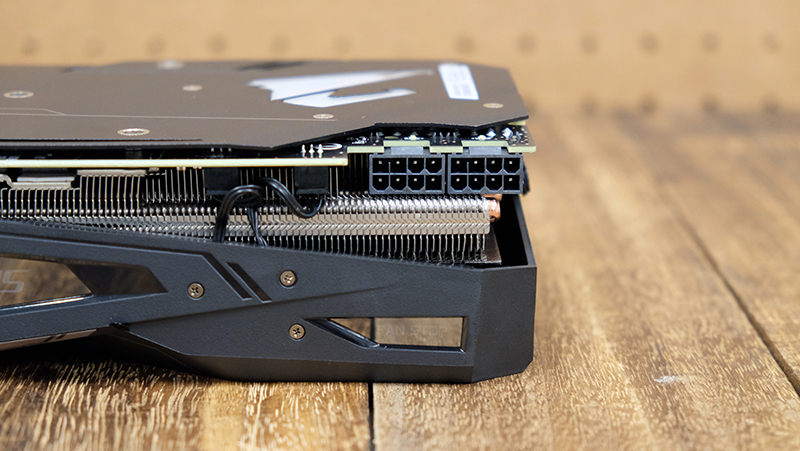 If you're worried about the card sagging, Gigabyte has helpfully included a bunch of metal rods and brackets that come together to form a GPU support stand of sorts that will help take some of the burden off the PCIe slot. This is hardly the most discreet or elegant solution, but it works. 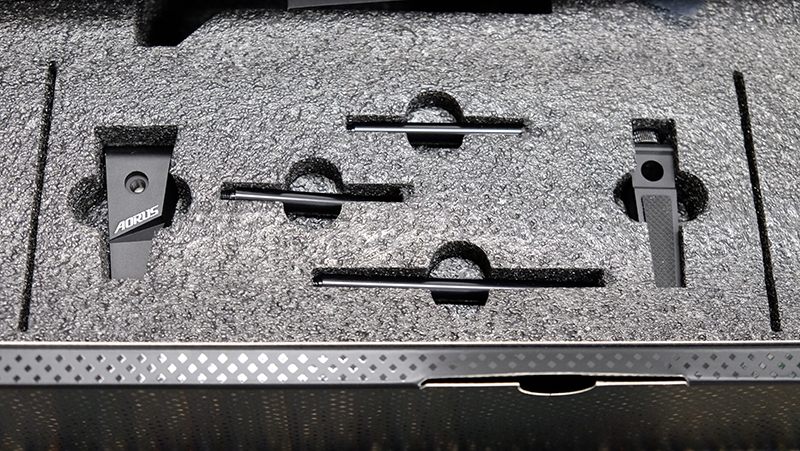 The card is factory overclocked out of the box, boasting a 1,890MHz boost clock, which is on par with the ASUS model. However, this is the only card I've seen so far to come with a memory overclock. That said, it's just a modest bump up to 1,768MHz, up from 1,750MHz.

To cap things off, Gigabyte has included a total of seven display outputs, the most on any custom card I’ve seen. It has a total of three DisplayPort, three HDMI, and one USB-C VirtualLink connector. However, they work in very specific combinations. For example, you can use either three HDMI and one DisplayPort, or three DisplayPort and one HDMI output, both combinations of which allow the USB-C port to be used as well. Further proof of an over-engineered card. 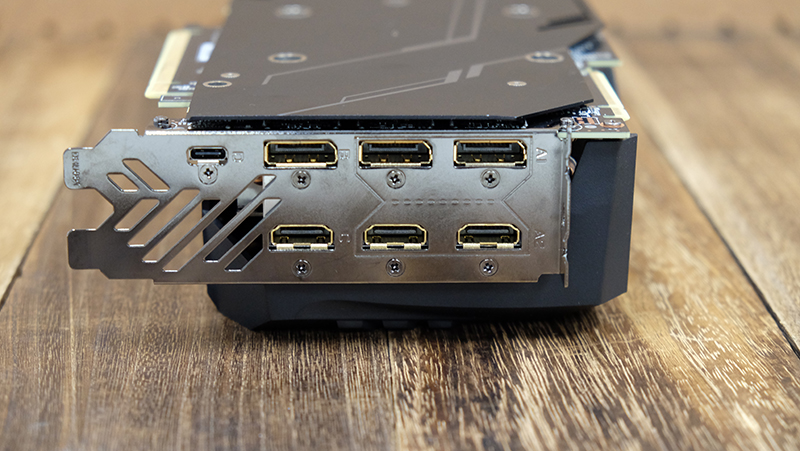