NVIDIA GeForce GTX 950: It's about more than just frame rates

NVIDIA GeForce GTX 950: It's about more than just frame rates 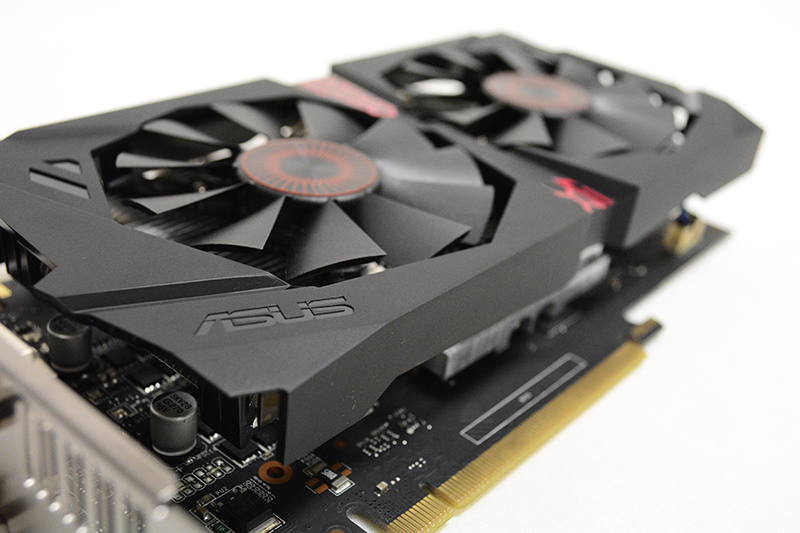 NVIDIA certainly has many cards (pun intended) up its sleeve. While AMD just trotted out the Radeon R9 Fury X, Fury, and its 300 series of re-branded graphics cards, NVIDIA isn’t even done with its GeForce GTX 900 series cards, which first made an appearance as the GeForce GTX 980 back in September 2014.

Now almost a year later, NVIDIA has a new, more affordable card for us. And coming so soon after the super high-end GeForce GTX Titan X and 980 Ti wowed us with their performance, it’s somewhat refreshing to see NVIDIA release a card for the average gamer.

With that said, NVIDIA still has a rather specific target audience in mind – multiplayer online battle arena, better known as MOBA, gamers. Players of competitive MOBA games like Dota 2, League of Legends and Heroes of the Storm require high frame rates, low input latency and great visual quality, and NVIDIA says the GeForce GTX 950 is designed to do just that. Here's a look at how it does that.

NVIDIA defines responsiveness as the delay between actuating a keyboard or mouse button and the moment that you see a corresponding action on screen. You may also know this by other terms like response time, latency, or input lag, but they essentially mean the same thing. Naturally, in competitive MOBA games like Dota 2, response times are everything, and NVIDIA has worked to cut it to a minimum on the GeForce GTX 950. Of course, your actual reflexes and reaction speed matter too – NVIDIA can’t be of much help if you’re slower than molasses.

According to NVIDIA, the GeForce GTX 650 has a latency of 80ms from mouse click to onscreen action. It says the GeForce GTX 950 has managed to almost halve this, with a delay of just 45ms now. 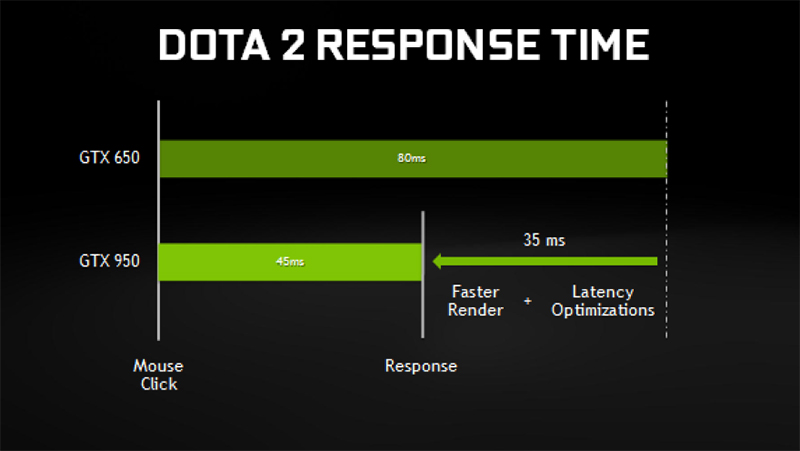 NVIDIA has managed to cut latency by optimizing the graphics pipeline, which is a series of processes all frames go through before being rendered on screen. In older graphics cards like the GeForce GTX 650, there are two DirectX rendering processes in the pipeline between when the game creates the frame and when it is shown on screen. This is where the 80ms of delay time comes in on the GeForce GTX 650.

Reducing the maximum number of pre-rendered frames involves removing the extra buffered stage (DX2), which cuts latency by preventing the CPU from processing more frames than it needs to, thus allowing the GPU to display the image quicker. The visual representation below illustrates this more clearly – the shorter pipeline means less delay between when the game creates a frame and when it is actually displayed. 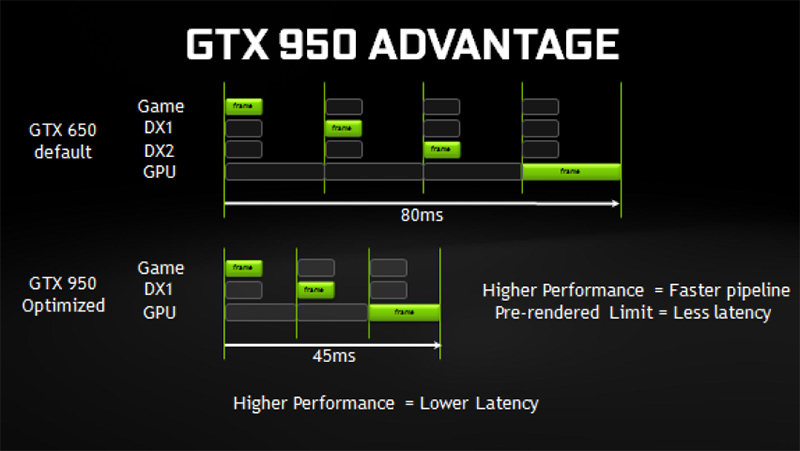 The maximum number of pre-rendered frames can actually be set manually in the NVIDIA Control Panel, but new optimization features in NVIDIA GeForce Experience make it much easier to switch to the optimal settings for lower input lag. In fact, the GeForce GTX 950 marks the first time that GeForce Experience can be used to optimize settings in the NVIDIA Control Panel. Existing settings allow you to set the optimal settings for resolution and graphics detail, but left things like refresh rate and pre-rendered frames untouched.

With the GeForce GTX 950, gamers now gain control over the following parameters via GeForce Experience:

As of now, GeForce Experience supports one-click optimization for Dota 2, League of Legends, and Heroes of the Storm, arguably the three games that occupy the lion’s share of the MOBA pie.

Gamers can choose between two different settings – one for the best image quality and the other for the lowest input lag and highest frame rates. For Dota 2, this involves setting the maximum number of pre-rendered frames to 1, turning MFAA off, setting the refresh rate to 100Hz (you’ll need a compatible monitor of course), and turning V-Sync on.

The last option may raise eyebrows among those of you who are familiar with the conventional wisdom that leaving V-Sync increases input lag, and you’re not wrong. However, that becomes a lot less noticeable at high frame rates, which is why NVIDIA has raised the refresh rate to 100Hz. Most reports of input lag with V-Sync come with monitors capped at 60Hz, and raising that cap to 100Hz on a compatible monitor allows gamers to take advantage of the smoother gameplay V-Sync offers (no tearing) together with the lower input lag offered by the higher frame rates. The reduced number of pre-rendered frames helps further reduce input lag, while turning MFAA off ensures that frame rates will not fall below 100fps and thus help eliminate stutters.

Finally, GeForce Experience also reaches into game-specific settings to reduce latency as well. For instance, some games default to run in borderless mode – instead of full screen – for better compatibility, but at the cost of higher latency. GeForce Experience is now able to automatically optimize all these settings, saving you the trouble of having to identify and tweak them individually.

That wraps up the technical updates you can expect from NVIDIA's new GeForce GTX 950, but stay tuned for a showdown between the various OEM partners' GTX 950 class graphics cards you can consider to upgrade your old system real soon!