As usual, the following are the specs of our trusty graphics card test bed system:-

With reference to our earlier article touching on the NVIDIA GeForce GTX 680, we are recalling a smaller sample of cards for comparison against our multi-GPU comparison. We also updated our drivers to ForceWare 301.10 and Catalyst 12.3 to iron out any stability issues that may arise with when running in multi-GPU mode. As a note to our readers, we encountered a technical issue when testing the pair of GeForce GTX 680 graphics cards:- 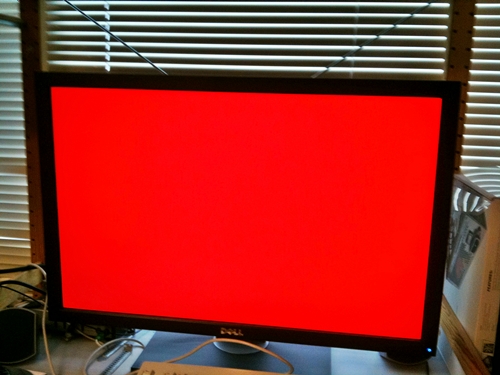 The red screen reminded us of the red-screen-of-death that was first encountered in our famous HardwareZone Iron Tech event back in 2008. Apart from reviving flashbacks of the past, the video display issue was affecting our benchmarking efforts. After some troubleshooting, we managed to isolate the cause of the problem to the SLI ribbon cable  connecting the two GeForce GTX 680 graphics cards. While we don't recall that being faulty, it simply wasn't playing nice with these new graphics cards. A brand new SLI ribbon cable  was used to replace the older one and we finally managed to turn the tide against the sea-of-red display issue! So in case you encounter something identical, we hope our findings would come in handy.

The list of cards tested and driver versions used:

EVGA PrecisionX is a third-party utility that we use for monitoring how GPU Boost works in our 2-way SLI setup. We have taken snapshots of the monitoring graphs which we will share in the relevant sections of the article. Additionally, we've also used this tool for overclocking our pair of GeForce GTX 680 cards.