Moving on to Crysis 2, the multi-GPU setup from both AMD and NVIDIA camps are running neck-to-neck at both the tested resolutions. Looking at the scaling, it seems as if both camps were limited by the CPU's throughput and both graphics card could do more at the lower resolution. At the highest resolution, we witnessed both pairs of cards from AMD and NVIDIA put in similar performances and they seem to be scaling at almost the same margin (similar to the single GPU versions of them). 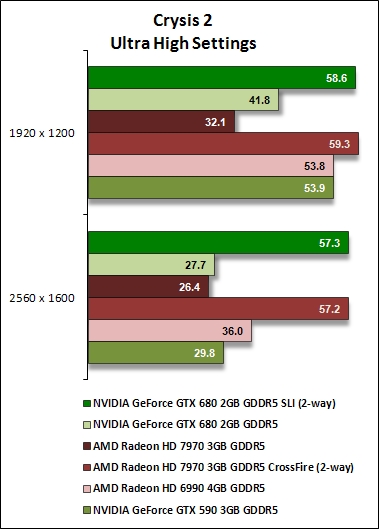 For the dual GeForce GTX 680, although their power consumption rates reached over 100%, the observed clock rates of the GPUs did not reach their maximum observed levels of 1100MHz and 1137MHz respectively:-

This PhysX-based game did not bring out the computing prowess of the CrossFire setup, or for the matter of fact, dual AMD GPUs as seen with the Radeon HD 6990 in action. It seems that dual AMD GPUs perform just about the same as a single GPU for reasons we're not certain even after checking all the obvious causes. We all know that the game is well optimized for NVIDIA graphics cards as the company worked closely to get PhysX well used in the game, but even then, we don't expect these sort of results. For the NVIDIA cards, while the performance was much better, the scaling from one GPU to two two of them wasn't really as much as we would have expected it to be. 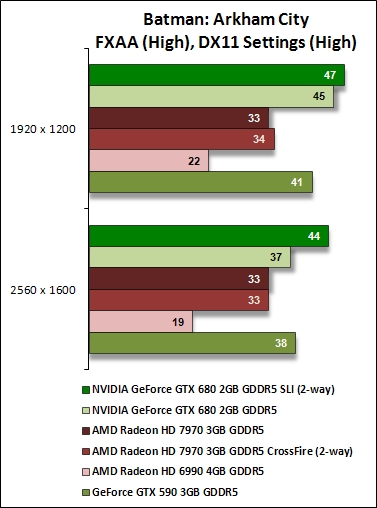 On this benchmark, we commonly observed that the clock rate of GPU2 to be higher than GPU1 for the pair of GeForce GTX 680 cards. The latter has reached its often-observed maximum clock rate of 1100Mhz while GPU2 seemed to have reached its peak at 1006MHz. The graphs charting the power consumption rates appear more erratic and it may point to the fact that GPU Boost may not be working as efficiently for this gaming benchmark.

The single AMD Radeon HD 7970 card failed to run at higher quality MSAA setting for this benchmark even with the latest Catalyst drivers installed on our test rig; however, in a 2-way CrossFire setup, the Radeon camp functioned as expected and was able to run almost neck-to-neck with their NVIDIA counterparts.

For the pair of NVIDIA Kepler GPUs, they scaled in the range of over 35% at the resolution of 1920 x 1200 pixels while at the highest resolution, they scaled better, with performance scores in the range of almost 50% to approximately 63% better than the single GPU. Again, the AMD Radeon HD 7970 had better scaling considering the single GPU results versus the dual-GPU results. Probably a powerful overclocked system could help both the top-end dual-GPU cards perform better and we'll retest this in the near future.

Back to scrutinizing the GeForce GTX 680 SLI setup, both the GPUs maintained their respective observed maximum core clock speeds of 1100MHz and 1137MHz for the duration of the benchmark. Their power consumption levels stayed in the range of 70% to slightly above 100% when GPU Boost kicked in.