The pair of NVIDIA GeForce GTX 680 cards took pole position at both test settings of the 3DMark 11 benchmark. They clocked in very impressive raw scores and against a single GeForce GTX 680, the 2-way SLI outperformed it by roughly 52% on Performance settings while on the Extreme settings, the pair pulled ahead by a winning margin of 93%! On an interesting note, these margins were somewhat replicated by our pair of AMD Radeon HD 7970 cards. On Extreme settings, the 2-way Crossfire setup pulled ahead from the lone AMD Radeon HD 7970 graphics card by almost 94% while on Performance settings, the pair won by a margin of 57%. Hence, relatively speaking, both NVIDIA's Kepler and AMD's GCN scale on almost identical terms on the 3DMark 11 benchmark! We shall see if this observation holds true in our other benchmarks. 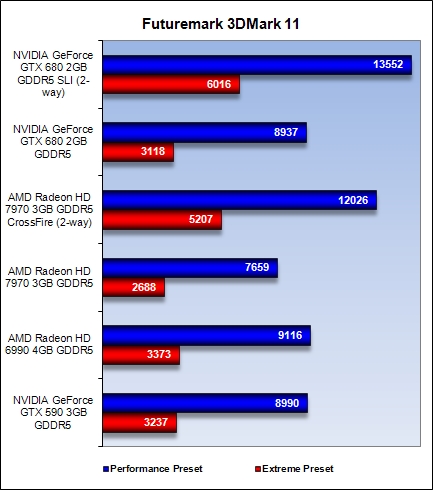 In this gaming benchmark, it is obvious that Tahiti XT Crossfire setup scales better than the Kepler pair, but the AMD cards were slower to begin with. The single GeForce GTX 680 had much higher results by default and was probably held back somewhat from our rig's capabilities when we tried to tax it further on an SLI setup. An overclocked setup could probably yield better results here. 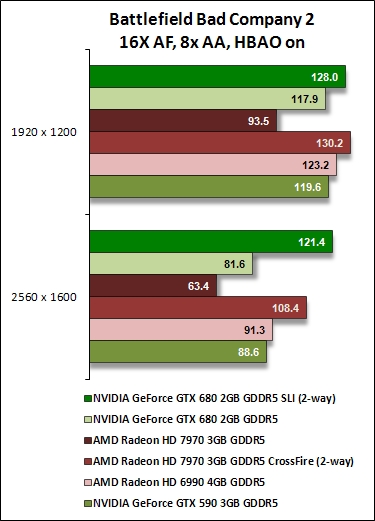 While running the Battlefield Bad Company 2 benchmark, we fired up the performance log to have a look at the cards' real-time performance. The snapshot below was obtained when we ran the game with the highest settings used during our benchmark run to ascertain its performance under such load. Ignore the start and ending portions of the graph since those periods correspond to periods prior and after the benchmark routine.