*Updated as of 14/09/12, 7.30pm: Ratings for the NVIDIA GeForce GTX 660 GPU SKU has been restored after re-checking results with an updated AMD Catalyst 12.8 drivers, which didn't improve the red camp's standing much at all. Hence original outcome and conclusion are still valid.

When it comes to mid-range graphics cards, the key metric gamers will be looking at is the price-to-performance ratio, i.e. how much bang do you get for your buck?

For this comparison, we calculated the average FPS of each card, based on its sum total score across all settings and resolutions on our gaming benchmarks, as well as the synthetic benchmark Unigine 2.1 "Heaven".  We then divided that score by the card's suggested retail price in US dollars to derive exactly what 1 US dollar will get you in terms of FPS for each card. 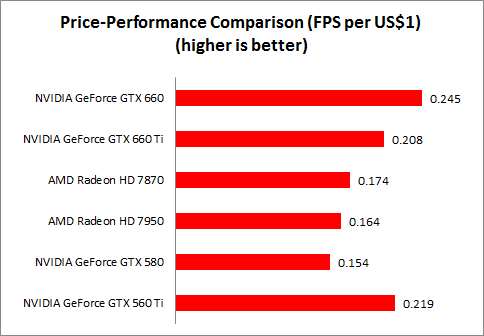 As you can see, the GTX 660 leads the pack, providing the most performance per dollar, with an excellent value of 0.245 FPS for every 1 US dollar. This is 17% better than what you get out of your dollar from the GTX 660 Ti, and an impressive 40% better value than AMD's Radeon HD 7870. Do remember though that this chart is not indicative of which card is more powerful, it merely shows the relative value worthiness of the card.

Additionally, these scores are in US dollars, due to it being the set SRP specified by NVIDIA and AMD. Local pricing will fluctuate based on availability and demand of each card. Do also note that AMD's recent price cuts have not yet been reflected in the local market, but we should see them trickle down within the next few months.

We were generally impressed with the GeForce GTX 660's performance, and it scored well enough that we can safely say it should be able to handle the needs of the average gamer. The reduction in CUDA Cores on the GK106 core has led to slightly weaker performance for games with high amounts of tessellation, and you won't be able to play 3D games or run multi-monitor setups with it, however, in all other areas, the card proved itself a strong contender. 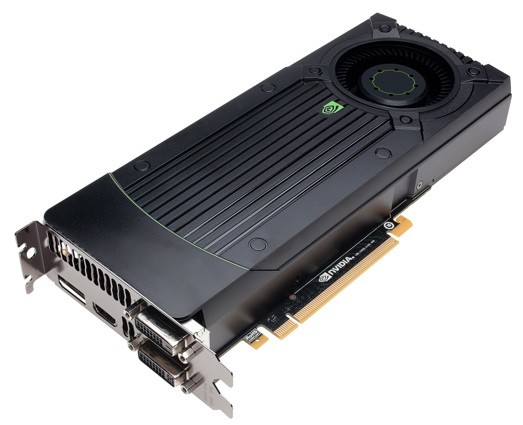 While we did not have AMD's direct competitor, the HD 7850 on hand, for the most part the GTX 660 was able to outgun the higher-end and more expensive Radeon HD 7870, and as such, it's safe to assume that the GTX 660 would handily outperform the Radeon HD 7850. In fact, in many of our tests, the GTX 660 even outperformed AMD's Radeon HD 7950, which is especially impressive when you consider that it's the second highest model in AMD's Graphics Core Next lineup.

Consumers who were disappointed with the pricing of the GTX 660 Ti will be pleased to see that custom factory overclocked editions of the GTX 660 generally run about S$100 less, which puts the GTX 660 right in the middle of the sweet spot for consumer pricing at between S$300-400.

For those of you trying to decide between the GTX 660 and the GTX 660 Ti, we've already seen that the GTX 660 is a better buy in terms of pure price-to-performance ratio. As for an evaluation of the actual difference in user experience, if you look purely at the numbers, the GTX 660 performed about 10-20% worse than the GTX 660 Ti. However the actual tangible difference in gaming experience is probably not worth the extra S$100. For all but one of our gaming benchmarks - the exception being the extremely taxing and high tessellation Crysis 2 - the GTX 660 was able to achieve between 30 and 60 FPS, which should be sufficient for most gamers. Do remember also that we run most of our tests at maximum settings, so turning down some options will produce better frame rates. While the GTX 660 Ti did score better, it wasn't a massive improvement, and certainly not enough to let you significantly change your in-game quality settings.

For gamers with older cards, and especially the 53% of NVIDIA users still using the old GeForce 9800 GT, the GTX 660 is a must consider. Not only will you experience a four to five times increase in performance, you'll be able to experience the upgraded visual quality of DX11, which includes better tessellation, compute shader and multi-threading support. This will be especially true for gamers planning on upgrading from Windows XP to Windows 8 this October. 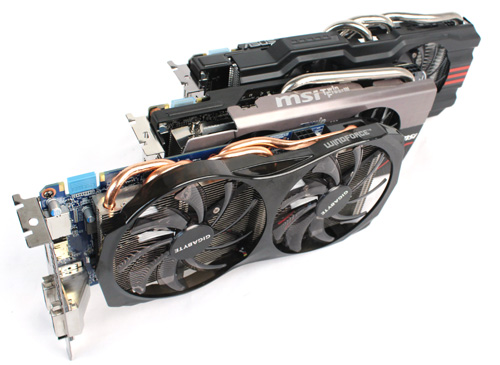 Our three-way shootout was very competitive, with all of our cards proving themselves as strong contenders. ASUS was the best competitor in terms of benchmark performance, maintaining a consistent lead of about 2-4% over Gigabyte and MSI. Its overclocking potential was also slightly better than its rivals. While its temperature and power consumption were also higher as a result, it was in line with its performance increase. As we've come to expect from ASUS cards, the GTX 660 DirectCU II TOP model is rather expensive at S$409, coming in at S$64 more than Gigabyte's model. While the TOP edition is only S$20 more than ASUS' reference speed DirectCU II model (retails for S$389), even that is S$44 more than Gigabyte's overclocked version.

Gigabyte's GTX 660 didn't have the big GPU Boost score of its GTX 660 Ti model, but was still competitive, scoring very close to MSI, and only just behind ASUS. Its open design Windforce cooler seemed to work better on this model, and the large fans helped it score the best temperature scores. One negative we should mention is that the cooler itself isn't the most attractive, and the 'bare bones' look probably isn't for everyone as it looks a bit like an entry-level or much older series card. Even so, its price of S$345 can't be beaten, making it significantly cheaper than both ASUS and MSI. At this price point, value is more important than squeezing out a minor increase in performance, and as such we feel that it's not worth spending the extra $64 for ASUS' model. It's possible that ASUS and MSI will adjust their pricing in future, but as with all things in tech, prices are ever-changing. If price differences were small, ASUS would have immediately gotten our nod of approval among the group.

MSI was the middle ground card in our shootout, performing slightly better than Gigabyte but without the extra heat or power consumption of ASUS. It also utilizes a slim and quite attractive cooler design that should look good in most people's cases. However, its pricing does not make it a compelling purchase, as for just a little more, you can opt for the more powerful ASUS card, or for S$44 less, you can pick up the similarly performing Gigabyte model.