Good Start to the Year

Good Start to the Year

The GeForce GTX 560 Ti was the first new SKU to be introduced this year and it was a good offering from NVIDIA. In a nutshell, the new 384-core chip offered GeForce GTX 470 levels of performance for GeForce GTX 460 prices, and so it was no surprise that barely a day after its launch, AMD was forced to slash prices of their 2GB and 1GB Radeon HD 6950 cards as well as the Radeon HD 6870. This just goes to show how much of a threat AMD thinks the GeForce GTX 560 Ti is.

It’s been barely a month since the GeForce GTX 560 Ti was launched, but already some really extreme edition cards have started floating round the market. We’ve already reviewed two fairly fast custom GeForce GTX 560 Ti cards in the form of the ASUS ENGTX560 Ti DCII TOP and Palit GeForce GTX 560 Ti Sonic, as well as an interestingly cooled Gainward GeForce GTX 560 Ti Phantom. Today, we have three more cards waiting to be benched within an inch of their lives. 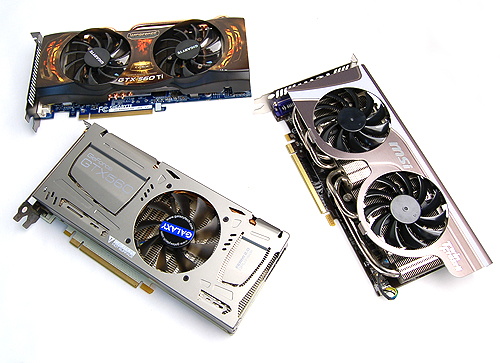 Here are the cards that will be tested today: