A Card for Every Price Point

A Card for Every Price Point

The return of the 'Ti' branding on the NVIDIA GeForce GTX 560 Ti, launched at the start of the year, heralded a more competitive NVIDIA. After a slow start to 2010, NVIDIA had arguably turned the corner with the debut of the GTX 460 and the green team has grown in strength since.

The company has since rejuvenated its mainstream offerings, with the 550 Ti that followed the 560 Ti. NVIDIA also managed the time to blast out the dual-GPU GTX 590 to counter AMD's Radeon HD 6990. Not forgetting the latest entry level 500 series models like the GT 520 and NVIDIA can state confidently that it has refreshed its entire range of graphics cards.

But as we mentioned in our 550 Ti roundup, there is quite the performance (and price) gap between the NVIDIA 550 Ti and the 560 Ti, which brings us to today's inevitable new SKU, the GeForce GTX 560. Equipped with a similar GF114 core, the new GTX 560 has 336 CUDA cores or stream processors compared to the 384 on the Ti version. This also meant a decrease of eight texture filtering units, thereby creating a GPU that falls between the 560 Ti and the 550 Ti.

With the GTX 560 Ti the successor to the GTX 470, it's only natural that the new GTX 560 will be considered the heir to the phenomenally successful GTX 460. Those are big shoes to fill however and we'll see if the new SKU manages that.

NVIDIA is also giving free rein to its board partners to set the clock speeds, with a rather wide range of core clocks deemed acceptable. This means one will probably find a range of speeds from 810MHz to 950MHz, though NVIDIA believes that the majority of GTX 560 in the market will be in the upper range. As a result, the prices too will be spread over a range, which is useful considering the almost US$100 price gap between the US$250 560 Ti and the US$150 550 Ti. 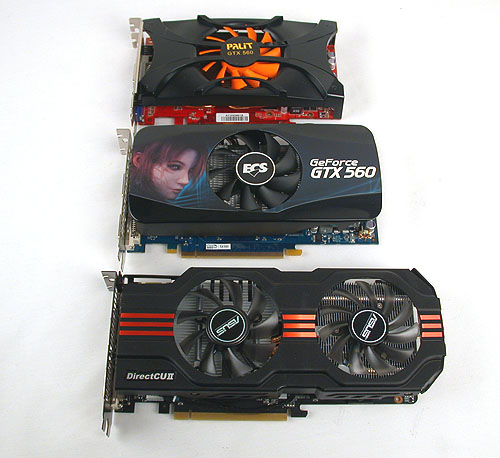 As it is, the GeForce GTX 560 starts from US$199 and with its similarity to the GeForce GTX 560 Ti, you can expect a performance level closer to the 560 Ti. We also expect the major board partners to have their products ready for launch. This definitely won't be a paper launch. For your reference, we have included the specifications for the new GTX 560, along with that of its closest competitors.