We tested all three cards with NVIDIA driver version 372.54. We’d have loved to include a contender from Gigabyte in our review, but we were unfortunately not able to secure a review unit in time due to supply issues.

We used the Fire Strike Extreme test in 3DMark 2013 for our power and temperature tests.

As the card with the most aggressive clock speeds, it was no surprise that the ASUS ROG Strix GeForce GTX 1080 managed to edge ahead of the competition. The Palit GeForce GTX 1080 GameRock Premium Edition wasn’t far behind though, and it was within a single percentage point of the ASUS card in 3DMark Fire Strike. The MSI card also ended up trailing the other two in 3DMark, no doubt due to it having the lowest clock speeds (even in OC mode) of the three tested cards.

Having said that, we’d caution against parsing the numbers too closely. It’s not really the best approach to quibble over small differences in clock speeds and performance. For one, you only have to look at the results obtained in Tom Clancy’s The Division to see how close the cards actually perform to each other. More often than not, a single frame barely separates two cards, and you can be sure that you won’t notice any difference when actually playing. 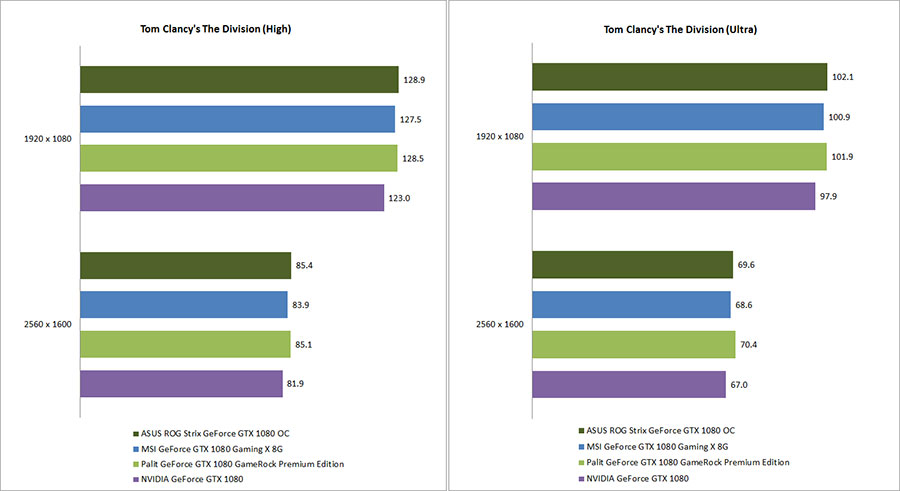 Overclocking performance was quite a mixed bag across the board. While we managed to squeeze out the highest clock speeds on the ASUS card, it didn’t actually post the highest results in all three 3DMark benchmarks. It topped the scoreboard in the 1080p Fire Strike test, but afterward fell behind the Palit card in Fire Strike Extreme and Ultra.

Although we mentioned in the earlier section that it seemed difficult to justify the extra thickness on the Palit card, it seems as if the more substantial heatsink may be helping it avoid thermal throttling during overclocking. In our temperature tests, which consisted of looping 3DMark Fire Strike Extreme for 15 minutes and then recording the peak temperature, the Palit card barely inched out the other two cards. This could partly be due to the oversized cooler, but we’d still argue that the single degree of difference isn’t quite worth the added bulk. 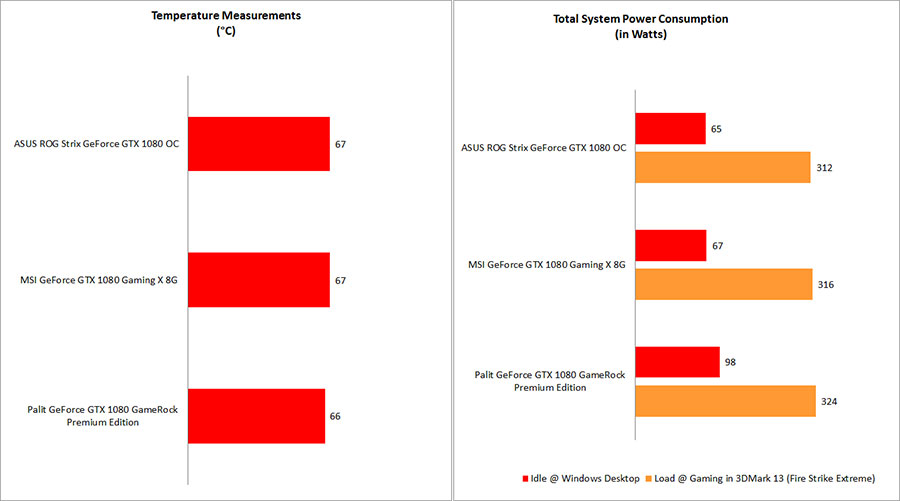