Palit’s card is one of the more interesting custom GeForce GTX 1080s on the market, if only because it represents a brand new series from the company. The GeForce GTX 1080 GameRock Edition was a new complement to Palit’s longstanding JetStream series of cards, and was marketed at a different audience.

As the name suggests, the GameRock cards are targeted at gamers, or more specifically those who want the best possible performance out-of-the-box. To this end, the cards are clocked higher than their equivalent JetStream counterparts,

There are actually two models of GameRock cards. Our review unit was the higher clocked Premium Edition card, which had a base clock of 1,746MHz and boost clock of 1,885MHz.

This is a card that stands out in a lot of ways, and not all of them good. We’ll get what we don’t like out of the way first, before focusing on the good stuff. For one, this is a 2.5 slots wide card, which means you’ll actually need three slots on your motherboard to install it. While the rear I/O plate is still the same width as other dual-slot cards, the cooler's shroud protrudes below it and is responsible for the extra thickness.

That could still be somewhat justified if the card turned out to be a lot cooler than its rivals, but that wasn’t the case, as we’ll see in our temperature testing results in the next section. Furthermore, the card can get quite noisy when under load, and we’re finding it difficult to say that you’re reaping any significant benefit at all from the thicker cooler.

But to be fair, the cooler does come with certain improvements over the previous generation, and it was the coolest out of all our tested cards, even if it was just by a single degree. Palit increased the fin density on the heatsink to provide a greater surface area for heat dissipation, but that's also a contributor as to why the card is noisier than expected under load.  That aside, the card also uses a large copper GPU baseplate that interfaces between the GPU die and the five heatpipes. 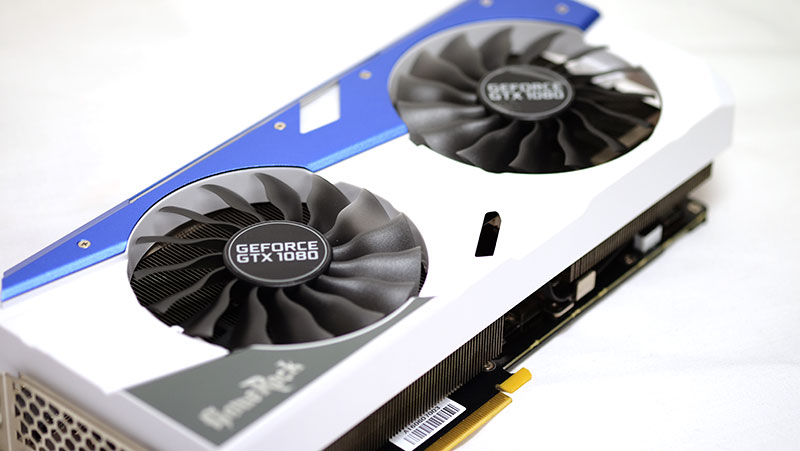 But our reservations about the fat cooler aside, it’s also important to award credit where credit’s due, and Palit has clearly worked hard to differentiate its new GameRock cards. Other than the rather unique blue-and-white color scheme (it’s going to be a matter of personal preference whether or not this appeals to you), the card features a dual BIOS switch and solder OC tweaking and measurement points for enthusiasts. The metal backplate itself is also quite eye-catching, with a distinctly Guitar Hero vibe coming from the GameRock logo on top. The latter is again quite a matter of personal opinion, but we do like the glossy brushed metal finish. 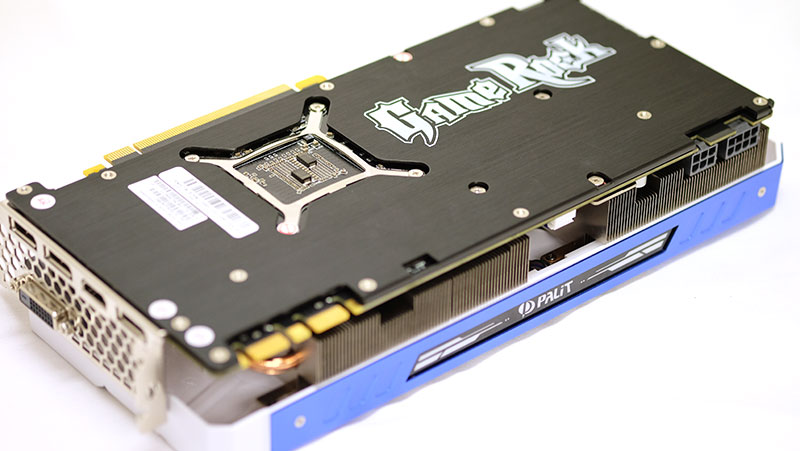 The dual BIOS will come in handy when recovering from failed overclocks, and the Palit card is the only card in our shootout to feature this, despite the seeming focus on overclocking on the ASUS and MSI cards. 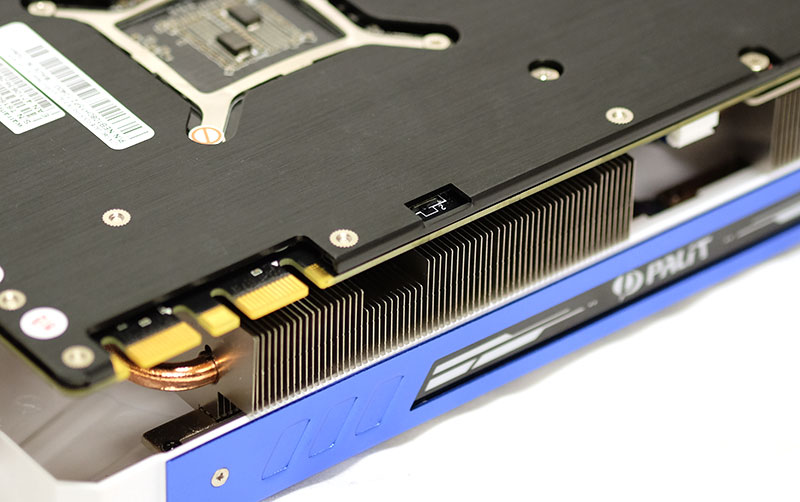 The power delivery circuit has seen an upgrade as well, and the Palit card uses an 8+2 phase design too that helps provide better efficiency, more stable voltages, and reduced noise. And as has become de rigeur these days (especially on the high-tier products), the card comes with an extra 6-pin PCIe power connector for additional overclocking headroom. 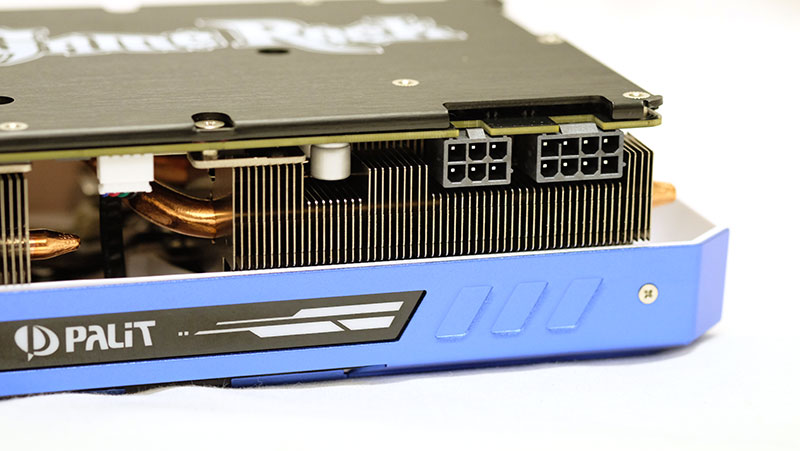 Round the back, you’ll find three DisplayPort connectors, one HDMI port, and a DVI output. The bracket also features a honeycomb mesh, which is more porous than what you usually get. This is an open-air cooler, so the more open mesh means heat can get exhausted more effectively out the back.

Finally, there’s Palit’s ThunderMaster utility, which lets you overclock and monitor the card, and also tweak the card’s LED lighting. You’ll have access to all the settings you need to overclock the card here, and the software is easy enough to navigate with clearly labeled options. You’ll also be able to switch to the backup BIOS here, making things even more convenient. Still, if we were to nitpick, it’s that the lighting options here aren’t as comprehensive as on competing cards. For instance, there are only options for a rainbow effect, static colors, and GPU-controlled lighting. Furthermore, there only seems to be the option to drag the slider to overclock the GPU, and we'd have preferred to have a manual input field for more fine-grained control. 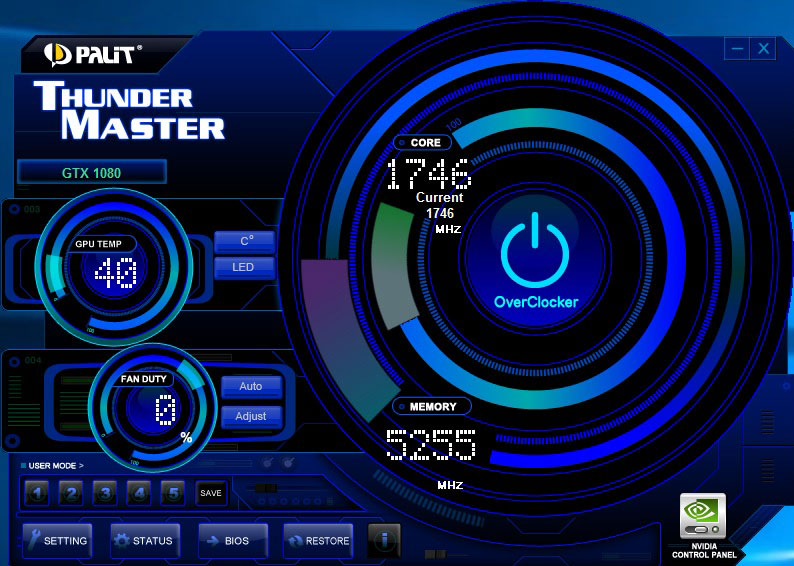 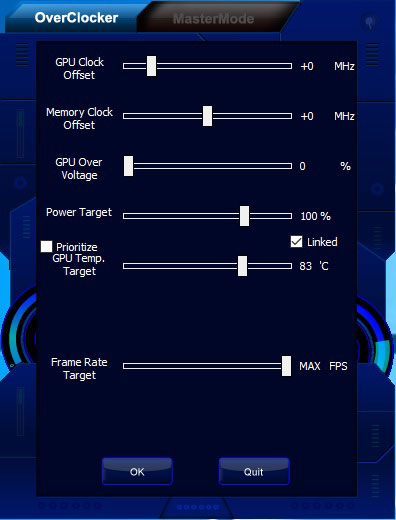