The GeForce 9800 GT is quite a recent addition to the graphics segment but it has hardly generated any excitement among enthusiasts. "Why?" You might wonder. You'll know the reason once you take a look at the specifications of the "new" GeForce 9800 GT and compare it with the older 8800 GT. Don't panic. Your eyes are not playing tricks on you and there are no typographical errors here.

The truth is, this is all an elaborate marketing ploy by NVIDIA to resell some of their older cards, because the simple fact of the matter is this: the 9800 GT is really an 8800 GT. Honest. The only difference is in the name.

Not that we are complaining. You see, the 8800 GT was a particular favorite of ours due to its outstanding performance to price ratio so we can expect more of the same. Still, we had hoped for more. Some have speculated that it will get support for 3-way SLI, but sadly, that didn't happen. Still others have said that the 9800 GT might have a higher clocked core as well as memory and shaders, but that unfortunately didn't happen either.

So has anything changed at all? Well, we are glad you asked and we are somewhat disappointed to report that the only thing that did change was added support for HybridPower. This is a feature found only on GeForce 9 series graphics cards that allows systems running on NVIDIA chipsets to switch to onboard integrated graphics when running less graphic-intensive applications, thus helping you save power and money. Hence it should be a useful feature for the budget and environmental conscious crowd.

Another improvement over the 8800 GT is that NVIDIA plans to eventually have all 9800 GTs manufactured on a 55nm process, which would theoretically lead to greater efficiency and lower power consumption and heat. That however is also still in the works and all the 9800 GTs we have here are currently on the 65nm manufacturing process, as the screenshot below can attest. Having said that, that's just about all the difference there is to the "new" 9800 GT. 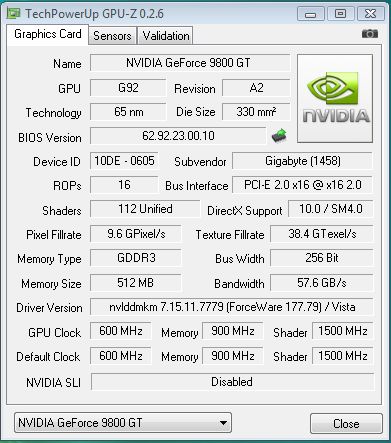 For our GeForce 9800 GT round-up today, we have gathered four cards: one from Gigabyte that comes with reference clock speed, and another two overclocked ones from Palit and Zotac, and lastly, a rather unique albeit engineering sample from ASUS. But before we begin, let's take a look at how the GeForce 9800 GT stacks up against the competition.