NVIDIA's Lumenex Engine - The AA Engine gets an Update

NVIDIA's Lumenex Engine - The AA Engine gets an Update

From the GeForce 8800's GPU functional diagram, we've thus far covered the NVIDIA Unified Architecture segment that takes up most of the top-half of the schematic. The other half of the GPU deals with the image quality aspects and that previously went by the name of Intellisample engine, but on the GeForce 8800, it has been given a notable upgrade and a new name to set it apart from the predecessor. 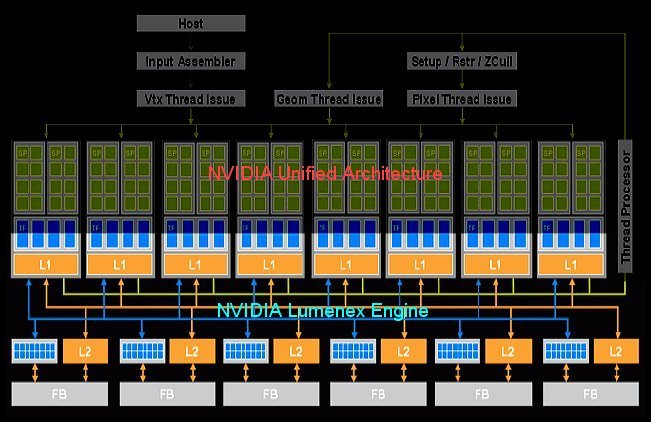 The Lumenex engine is essentially the new anti-aliasing (AA), anisotropic filtering (AF), high dynamic range (HDR) and display engine. Since AA is involved, you can be sure that the traditional raster operator (ROP) engines do the needy to smoothen all the jagged edges you see in your game. On the GeForce 8800 GTX, there are 24 of ROP units while the GeForce 8800 GTS features 20, still more than the 16 found on the earlier single GPU configurations. The usual multi-sampling AA (MSAA) and supersampling (SSAA) are present on the GeForce 8800 series, but in addition to those, there's now a new method called Coverage Sampling AA (CSAA). According to NVIDIA, it uses a new algorithm that uses intelligent coverage information to perform high-quality anti-aliasing without much performance hit as associated in the past. Basically, it applies AA by analyzing the number of subsamples to see where it requires smoothening, but taking into account of fewer color/Z information of the samples, hence the term Coverage Sampling AA. Given that 16x AA is selected, the CSAA technique analyzes 16 subsamples, but only stores four values of the color/Z information. MSAA analyses 16 subsamples and stores color/Z information for all 16 of them. SSAA factors what MSAA does but actually also stores all of the texture samples too, thus the reason why SSAA is extremely bandwidth hungry and is seldom used.

Normally you wouldn't use beyond four sub-samples for anti-aliasing, unless you happen to have a high-end SLI or CrossFire setup. Now with CSAA technique, you can use 16x CSAA to obtain higher quality gaming without much more performance hit than normal 4x MSAA. NVIDIA places the figure to be roughly 10 to 20% more taxing than 4x MSAA on the GeForce 8800 series, which is not bad at all since they have plenty of processing power to spare. However, don't expect drastic improvements in image quality as 4x MSAA at high resolution generally irons out the more obvious jaggies, leaving only minor irritants. That's where 16x CSAA comes in to ensure better smoothening without much performance loss, but it is of course still a small compromise in quality when compared against 16x MSAA.

In total, CSAA introduces three new AA modes, 8x, 16x and 16xQ (where 16x uses four subsample's color/Z information while 16xQ uses eight of them). On MSAA, 8xQ has been added. All of these four new modes are available on a single GeForce 8800 series graphics card. Previously, you had to run SLI to be offered these high AA levels (bases on MSAA), but with the advancements made to the AA engine and the AA techniques supported on the GeForce 8800, just a single card is all you need to sustain ultra high quality gaming. 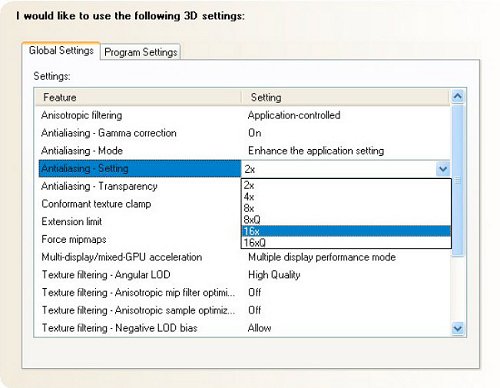 The usual method of applying AA is normally via the game's interface or forced through the graphics drivers. However, there's now another option, "Enhance Application Setting". For games that have AA options or capability built-in, NVIDIA highly recommends this option. This is because there are games, which apply AA intelligently where required, or where it's been flagged and not just blindly throughout the entire scene. This naturally means bandwidth and process cycles saved in return for better performance or power efficiency. However you may not be satisfied with the AA options available in-game, thus you can 'enhance' the AA levels by selecting the "Enhance Application Setting" option in the driver control panel and setting your desired value. Thus the game still applies AA smartly, but at the desired level of AA you require. Take note that the new CSAA anti-aliasing technique specifically requires you to use this mode of operation. 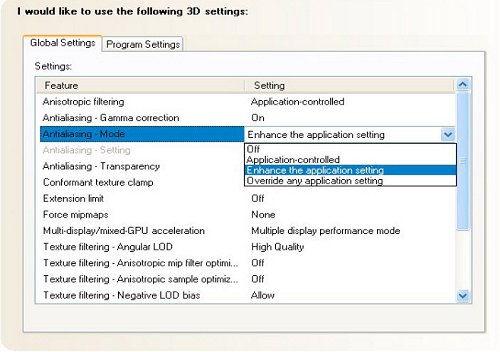 Games that do not feature any AA controls and lack built-in AA, users can fallback upon the usual option to override application settings and force the desired number of AA sub-samples compared.