Hybrid SLI - The Much Awaited Advancement

Hybrid SLI - The Much Awaited Advancement

2007 has been a busy year for NVIDIA in both the graphics and desktop solutions department and to prove that they've the momentum going strong, no sooner than a week in to the brand new year, NVIDIA announced several new updates concerning their 'secretive' Hybrid SLI technology. We've actually mentioned that the big green has been working on Hybrid SLI technology for a long time and we ourselves have been predicting such a concept even before that. The idea of SLI (Scalable Link Interface) itself was a major step in the graphics performance evolution back in 2004 and today, they are at it again to further progress this concept.

NVIDIA's Hybrid SLI is addresses two key concerns of cranking up graphics performance ever higher (as well as maximizing graphics silicon) and reducing power consumption. To deal with them, Hybrid SLI is a combination of two sub technologies - GeForce Boost and HybridPower.

GeForce Boost is a technology that provides discrete GPUs (dGPU) more graphics processing prowess when used on an NVIDIA motherboard GPU (mGPU) platform. This is the main concept behind Hybrid SLI where users were hoping to leverage performance of both a motherboard or notebook's integrated GPU capabilities in addition to the discrete GPU for a combined performance boost than any one solution alone. The closest implementation of this to date is a manual switch that toggles between either a discrete or integrated GPU option on a few select notebooks such as the Sony SZ series. With the newer NVIDIA platforms supporting Hybrid SLI, this will be a thing of the past. Our more technical readers might be wondering how two very unlike GPUs can be made to work together to boost performance as there's bound to be syncing or latency issues. For the moment, NVIDIA hasn't delved into the details, but they did attribute the bulk of this capability is thanks to the driver development team who've incorporated advanced intelligence and balancing techniques to split work load appropriately between the mGPU and dGPU respectively. Naturally, the discrete GPU is going to be doing the bulk of the actual rendering while the motherboard integrated GPU tags along to boost performance to its best ability.

How GeForce Boost works is that the driver intelligently figures out what portion of the workload is to be handled by each GPU and dispatches the respective graphics commands to both GPUs. Each GPU will work to render a separate set of frames, and the result of which is stored in their respective frame buffers. Block transfers (BLT) then occur to transfer the discrete GPU's rendered image to the mGPU's frame buffer because the primary output display will be from the integrated GPU. 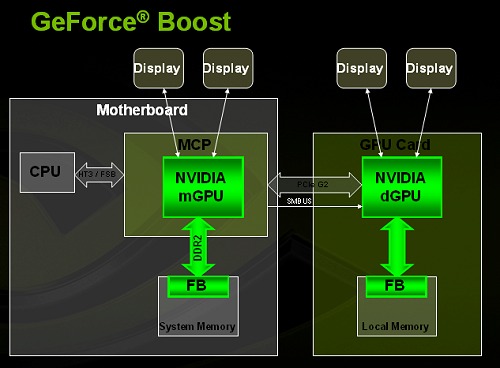 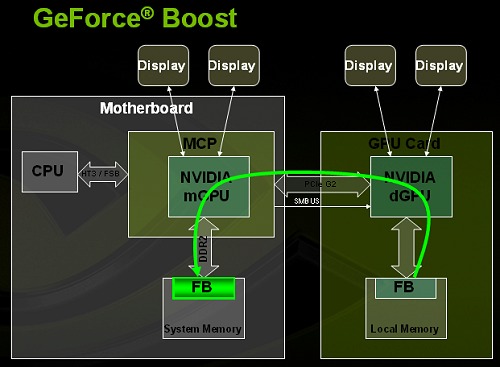 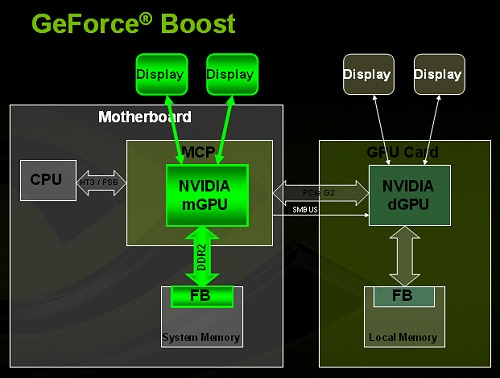