The problem with battery tests

Testing any device’s battery is not as easy as it sounds, especially if it’s a notebook. To begin, a notebook is an extremely multifaceted device that can do many things. It can be used for work, it can play games, and it can show videos, and each task affects its battery life in different ways.

And then there’s the matter of manufacturer’s claims. Each manufacturer measures and reports their notebook’s battery life differently, making it hard to draw any kind of meaningful conclusion. 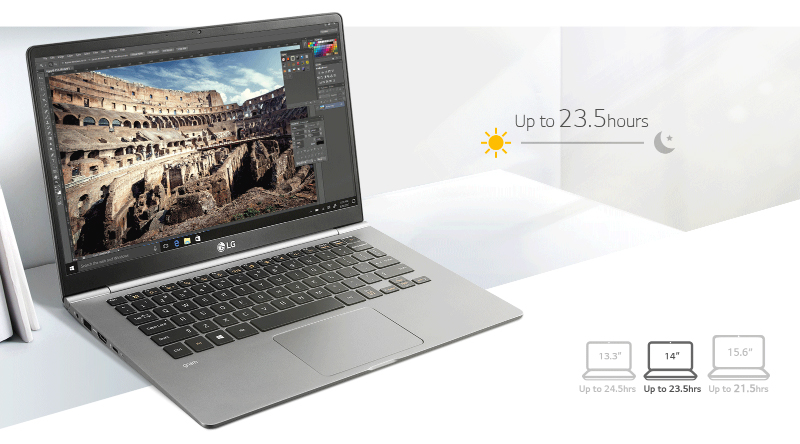 And here’s HP for the Spectre X360. Very specific and detailed but different from others:

And then there’s Apple’s:

And some, like LG, are quite vague about how they measure battery life. This is the footnote for their LG gram notebook:

Battery life can vary, depending on the model, settings, and user environments based on the MobileMark® 2014 standard.

To be clear, there’s nothing wrong with the way their notebooks are tested — the test parameters used are entirely plausible. It’s just that they are inconsistent so there's no way of drawing any kind of worthwhile conclusion between each manufacturer’s claims.

So to address this issue, we need a benchmark that is consistent and produces repeatable results.

Our old battery testing benchmark, the Home workload in PCMark 8, was good in that respect. But its parameters are too broad and probably not entirely representative of most use cases.

It runs a workload that cycles through the following:

While web browsing and productivity are fairly common use cases, the remaining three are less so. Furthermore, they put a great strain on the battery, which gives us results that are a little skewed. While it’s fair to say that the final results represent the “worst-case scenario,” the same argument could be made that they are not entirely representative of normal use cases. That's because, as we will find out later, the worst-case scenario battery life and the battery life that you will normally get if you use a notebook sensibly is very different.

So what then are normal use cases? We have identified this to be web browsing, productivity, and video watching.

This brings us to the latest version of PCMark 10 which adds a much-requested battery test feature that was designed to more accurately mimic real-world usage by offering a couple of test scenarios.

These are the test scenarios and what they represent according to UL Benchmarks (the people behind this benchmark, also previously known as Futuremark) :

The ones we are most interested in its Modern Office, Video, and Gaming. There’s some overlap between Modern Office and Applications since the former includes web browsing and word processing, which is also tested under the Applications workload. However, Modern Office includes video conferencing which makes for a more varied run, whereas Applications solely runs productivity workloads which is too specific in our opinion.

The Video workload will give users a good idea of how long the machines will run if they only want to binge on movies and shows. Finally, the Gaming workload represents a worst-case scenario of how long the notebook would last if it was taxed to the maximum.