From Nikon HQ: The Company on the New D800 and Coolpix Cameras (Hands-on)

From Nikon HQ: The Company on the New D800 and Coolpix Cameras (Hands-on)

All You Need to Know About the D800 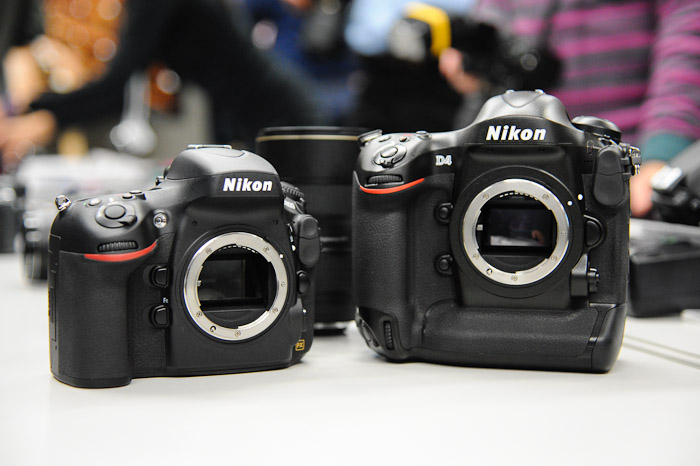 Welcome to Japan! We're reporting, not-quite-live, from Nikon HQ about the launch of their new D800 DSLR and Coolpix cameras.

Nikon announced the D800 on Tuesday, a full-frame DSLR which shoots a stunningly high 36MP. They say that the D800 is a rival for medium format cameras, and while the previously announced D4 is a fast camera emphasizing high speed and high sensitivity, the D800 places emphasis on quality and resolution. Two versions of the D800 will be made, the D800 and the D800E, the latter comes with a different physical filter than the low-pass filter found in the D800.

Because of the in-camera disabling of aliasing and moire pattern reduction, light passes straight through to the D800E's sensor allowing for even greater resolution, which makes the camera more ideal for landscape photography where more detail can be captured. The flip side is that moire patterns can sometimes be seen in subjects with repeating patterns (like dense window grills). Other than the different filter, the D800 and D800E are identical.

When asked why 36MP and not a lower megapixel count with larger photo-sites, Nikon said that after the release of the 24MP D3X, their customers requested for even more resolution. In development, Nikon found that they could achieve the best balance between image quality and resolution at the 36MP mark.

Also new to the D800 is advanced scene recognition. The D800's sensor can detect faces prior to shooting, even in viewfinder shooting mode. It may not sound like much, but photographer Cliff Mautner has shot some impressive examples of what this feature does in the real world. By focusing and exposing for the subject's face instead of other elements, the D800 nails exposure more accurately for the most important part in the photo.

The D800 has the new EXPEED 3 image processing engine first seen in the D4. The new engine lets the D800 capture up to Full-HD 1080/30p video, Nikon says that rolling shutter, block and mosquito noise have all been reduced. By using B-frame data compression the video loses less detail and retains more image quality.

It's obvious that Nikon is gunning for Canon's lunch with the video capabilities of the D4 and D800. Like the D4, the D800 comes with a headphone jack for sound monitoring with the ability to adjust audio levels in-camera. The camera can output live view through HDMI and record uncompressed video via the same. Unfortunately, while the D800 can shoot 720/60p/50p, it can't shoot beyond 30 frames per second at 1920 x 1080. Nikon says that this is a speed limitation of the current platform and can't be changed via future firmware upgrades. 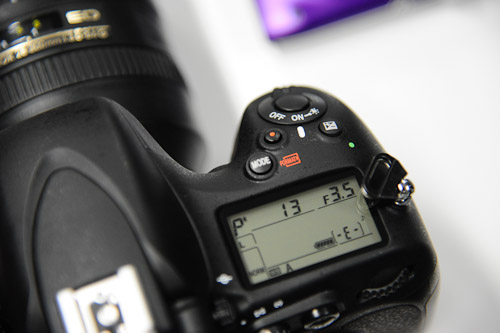 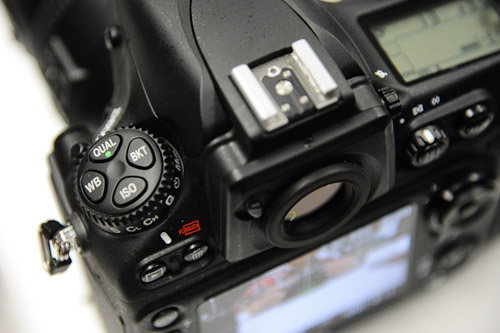 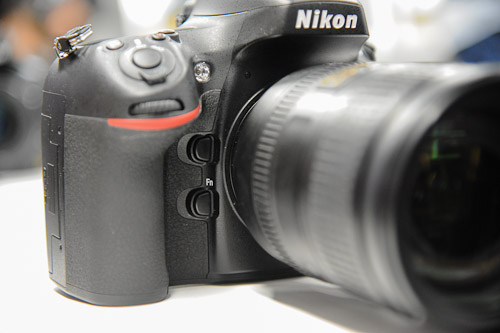 First Impressions of the D800

D700 upgraders will be glad to hear that the D800 has lost some weight - it's about 10% lighter than the D700, 900g (body only) compared to 995g. You can't really feel the difference holding both cameras in your hands (unless you have really sensitive hands) but any reduction in weight is welcome. Nikon says durability hasn't been compromised though, the D800 still has a magnesium alloy frame and is shock, weather and dust-resistant.

The D800's handling feels like a mash-up of the D700 and the D7000. Controls have made way to accommodate for live view and video recording. There is a video Record button directly below the shutter release. The D7000's auto-focus control is here on the front of the camera, near the lens. The Live View switch is, luckily, the good one found on the D7000, not the modified version found on the newer D5100. 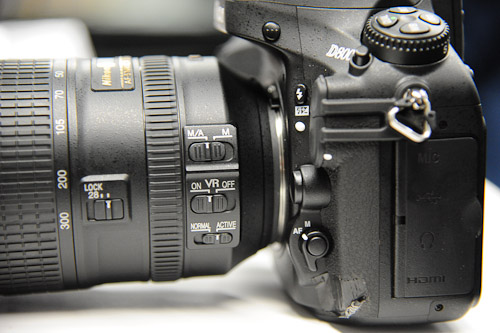 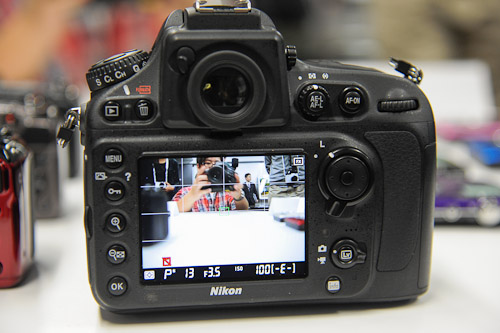 This wasn't a new announcement as Nikon had already released the news on these 12 new Coolpix cameras earlier in the month. The main points for the spring Coolpix collection is higher optical zooms, and improved vibration reduction image stabilization which promises to get you steady and sharp shots at the furthest ranges even when shooting handheld.

Indeed, one of the Nikon reps projected a photo he had shot of the moon, handheld with the new P510 which has a high 42x optical zoom. Even when magnified, the moon was sharp. Impressive. Lens-shift vibration reduction has been extended even to the low-price models, the S4300 and S3300.

The P310 is shaping up to be an interesting competitor to Canon's S100. The camera has a bright f/1.8 lens at its widest focal length of 24mm, and two command dials for manual control. 16MP with a 4.2x optical zoom, and really looking like a smaller Nikon 1 camera.

Tellingly, while there are many GPS capable cameras among the new releases, there isn't a single Wi-Fi capable camera, unlike those just announced by Canon. 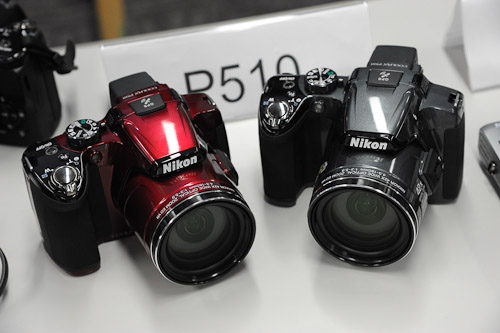 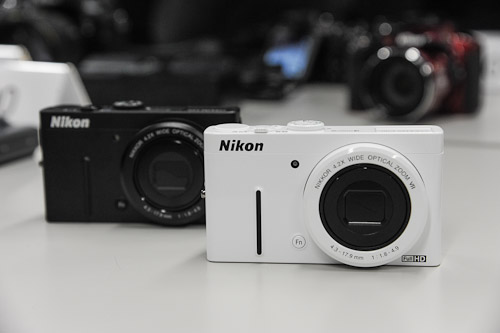 Do We Really Need That Many New Compact Cameras?

When asked why Nikon (and other camera companies, by the way) releases so many cameras at a go and whether it would confuse customers with too many choices, Nikon responded by saying that users ask for different things in different markets. Nikon is launching 12 models to fulfill their customers' different requests, and not every country will get every camera announced as a result. 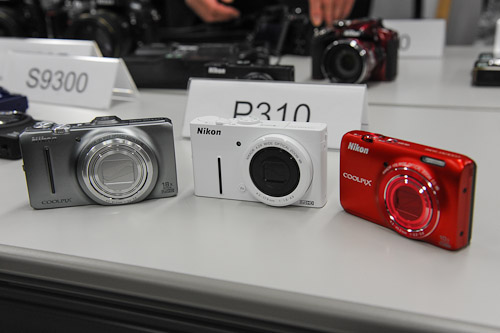 With the rise of mirrorless system cameras and smartphone cameras, we asked what was Nikon's strategy moving forward for digital compact cameras. Nikon believes that a certain segment of smartphone users will upgrade to compact cameras for the better quality, and that the compact size still remains relevant when compared to small but not as small mirrorless system cameras.

Even though Nikon's data shows that users are holding on to their cameras for longing now before buying a new one, they believe that there are still markets to conquer (we guess Nikon is referring to the developing countries, where smartphones still aren't widespread and not as many people own a camera).