Disney’s synopsis for Luca promises, “a coming-of-age story about one young boy experiencing an unforgettable summer filled with gelato, pasta and endless scooter rides.” That young boy is Luca, a sea monster who befriends another sea monster named Alberto. Together, the two decide to venture into the human world for the very first time via the town of Portorosso. As The Little Mermaid taught us, it’s a little hard to get a foot in with these pesky humans when you don’t know much about them. Look at that gorgeous animation!

After this kaiju-stomping anime series finishes its run in Japan, it’s dropping on Netflix for all of us to binge. Studio Bones (My Hero Academia) helms this entirely new take on the Godzilla universe with a colourful cast of human characters struggling to unravel the mysteries behind a sudden outbreak of kaiju. You won’t just see the Big G in this - his compatriots and occasional rivals Rodan, Jet Jaguar and more will appear too.

This quirky-looking Disney+ original follows the adventures of four young orphans, each gifted in different ways bound together by the ability to see straight to the truth. So says the strange Nicholas Benedict at the very least, who employs them to stop his evil twin - Ledroptha Curtain - from using brainwashing techniques to take over the world. This show is based on a book series of the same name, so at least you’ll have something to read after your binge.

The Seven Deadly Sins is coming to an end with this final season - but at least we still have more episodes to look forward to for now! The Seven Deadly Sins has delivered one thrilling adventure after another, following ten commandments as they battle against evil. The epic saga is finally coming to an end, so now would be a pretty good time to catch up on past seasons before Dragon’s Judgement drops. 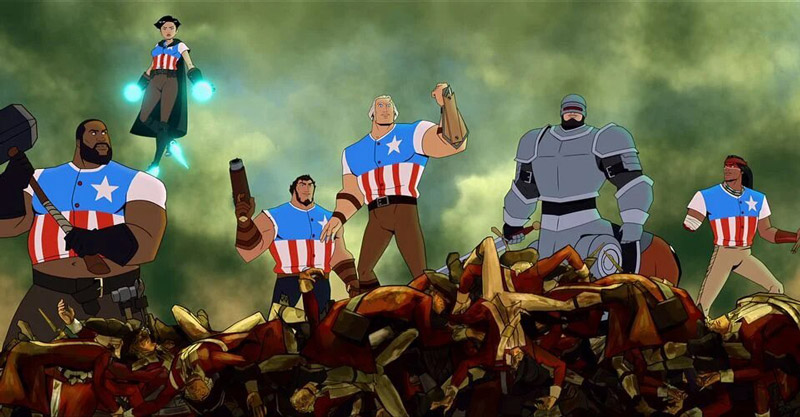 This Netflix original has a pretty stacked cast. In a spoofed-up look at the American Revolution, a buff and chainsaw-wielding George Washington teams up with Sam Adams, Thomas Edison, Paul Revere and Geronimo to take down Benedict Arnold and King James. Channing Tatum, Simon Pegg, Judy Greer, Bobby Moynihan, Olivia Munn, Will Forte, Andy Samberg, Jason Mantzoukas, Raoul Trujillo and more star. Phil Lord and Christopher Miller are producing, and they have a tendency of making some pretty great animated stuff: Cloudy with a Chance of Meatballs, the Lego Movie, Spider-Man: Into the Spider-Verse, The Mitchells vs. the Machines… you get the idea.