New iPad vs. iPad 2: Just How Good is the Retina Display?

New iPad vs. iPad 2: Just How Good is the Retina Display?

Apple's third generation iPad has reached our labs, but before we give you the full review, here's a quick look at one of the key features of the new iPad - the increased screen resolution of 2048 x 1536 pixels. 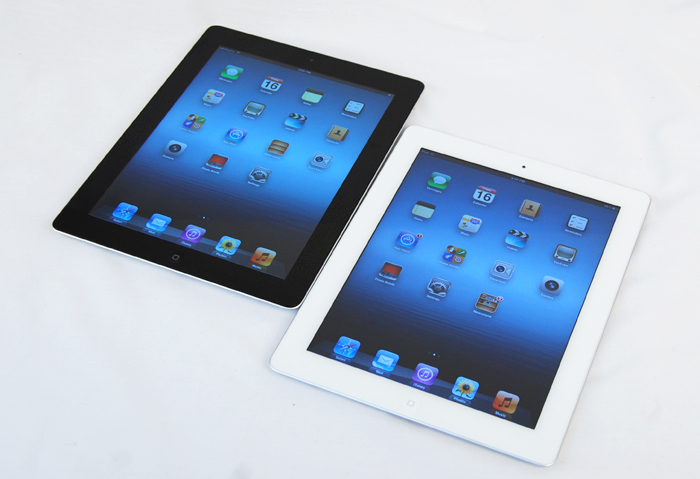 Before we dive further in, you'll need to understand what 'Retina display' means.  A term introduced with the iPhone 4, Apple defines a 'Retina display' as one where, when held at a normal viewing distance, your eye cannot discern a screen's individual pixels because of its high resolution. So the important point is that the Retina display doesn't equate to a new fixed display resolution (as the iPhone 4 uses a screen with 960 x 640 pixels), but one that's appropriate to the device at hand that meets the said criteria.

Marketing terms aside, the technology behind the iPad's screen is essentially an LED-backlit in-plane switching (IPS) display. The main benefits of IPS panels include a much wider viewing angle than the usual twisted nematic (TN) display technology, and better color reproduction with almost no off-angle color shift.

Apple's first generation iPad had an IPS panel, and the iPad 2 basically followed suit with the same screen size and display resolution at 1024 x 768 pixels. As mentioned in our earlier breakdown of the new iPad, Apple's third generation tablet packs more pixels, 2048 x 1536, into the same 9.7-inch screen. With more pixels on the same screen size, this essentially bumps up the pixel density of the new iPad, from 786,432 pixels in total on the iPad 2 to 3.1 million pixels on the new iPad. 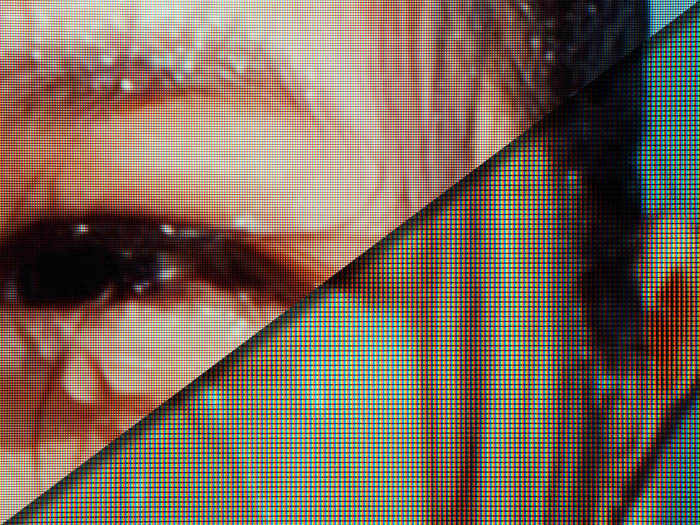 Will a higher pixel density make a huge difference in the reading experience on the new iPad? Based on the numbers, that would be a yes. To further illustrate this, we placed the new iPad under a macro lens, against the previous generation iPad 2 and the Samsung Galaxy Tab 7.7.

When looking at the image samples below, some of the image details may look fuzzy. This is because we're zooming in really close with the macro lens. This is akin to holding the iPad right to your eyes, looking at a photo really close; you'll notice it won't appear as 'sharp' as compared to looking at it normally. In reality, you won't bring the iPad this close to your line of vision, but we're doing it to make a point.

Considering the close proximity of the lens to the screen, our close-up crops are only 25% crops. If we crop 100%, all you'll see are pixels. Take note that the images have been shot through a lens, processed by our camera, re-sized and saved again for online viewing and are further interpreted through your monitor. The colors depicted in these images won't look exactly the same as what you'll see holding an iPad in real life, but we're confident you'll still be able to see a clear difference in these comparison images.

To start off, we'll look at how the new iPad fares against the iPad 2, using the same sample image, website and icons.

Cropped at 25%, the results are evident - the iPad 2's image looks much more pixelated compared to the new iPad's. In fact, if you take a much closer look, you'll notice how obvious the RGB colors are showing on the iPad 2 image. This confirms what we already know - the higher screen resolution creates a much finer and detailed presentation from the same image.

One of the highlights of the higher resolution is the finer text quality you get on the new iPad. In this example, we chose to highlight the difference in resolution with Chinese characters on a website, given how complex characters tend to be squashed together. As the saying goes, a picture paints a thousand words, and in this case, a higher pixel density helps paint a better picture as seen in the examples below.

One of the most visible improvements you'll see on the new iPad is on the user interface. To be precise, let's look at the app icons on the user interface. Unsurprisingly, with a higher resolution, file sizes for the apps will increase correspondingly to match the new display resolution. Icons too contribute to the increased file size, but the visual improvement is quite welcomed. As seen in the images below, you'll find a vast difference in the details of the app icons and its accompanying text.

The next batch of images that you'll see will be a comparison between the new iPad and the Samsung Galaxy Tab 7.7. With the latter display's higher pixel density than the older iPad 2, it would be interesting to see how it compares with the brand new iPad.

And finally, to show you just how rich in pixels the new iPad's screen is in comparison to the iPad 2 and the Samsung Galaxy Tab 7.7, here's a 100% crop of an image we shot off their screens. You can clearly see the RGB (red, green, blue) sub-pixels on the iPad 2, and if you squint you can also make them out on the Galaxy Tab 7.7. But there are so many pixels crammed into the new iPad that they just become a dense mess - if our macro lens can't make the individual pixels out at this magnification then it's doubtful our eyes will.

So how sold are we on the higher screen resolution for the new iPad? Safe to say, we are impressed with how much more details were visible. This is especially prominent when we viewed text on the new iPad. Images on the new iPad look much sharper, which became even more obvious when we zoomed all the way in with high resolution images.

Over the next few months, we are expecting developers to update their apps for the higher resolution on the new iPad. As of now, Apple has revealed a list of apps that have been updated for the new iPad, along with a section recommending these apps in the iTunes Store. We've also seen some of the iPhone apps in action on the new iPad, and when we chose to stretch the app to fit the display, the quality did not turn out half bad.

Putting its other hardware improvements (such as a 5-megapixel camera and a new Apple A5X processor) aside, the bumped up screen resolution is perhaps one of the few reasons that will compel you to choose the new iPad over the current stable of tablets out there. After all, most tablets are used as media consumption devices and the richer screen of the latest iPad just makes it all the more enticing to enjoy your portable entertainment slate.