Announcing the Yamaha Aventage A20 Series

For those unaware, Yamaha has two main series under their AV receivers (AVR) line-up: V Series and Aventage. The current RX-V73 series was introduced recently, and during the Sound & Sight Exhibition 2012 over the weekend, the Japanese home cinema audio and consumer electronics specialist took the opportunity to unveil its latest Aventage RX-A20 line-up to the local audience.

We first caught a glimpse of the new Aventage A20 series at IFA 2012 in September, but to recap, the existing models in the A10 series - RX-A810, RX-A1010, RX-A2010, and RX-A3010 - are now succeeded by new models, namely the RX-A820, RX-A1020, RX-A2020, and RX-A3020. Similar to the RX-V473, RX-V573, and RX-V673, the new A20 series of AVRs gains support for Apple’s AirPlay wireless streaming protocol. With AirPlay, users can play music that's on their iPod, iPhone, or iPad, as well as music in their iTunes library on their computers straight from the receiver, along with metadata such as song title, artist name, and album artwork. The front of the receivers even sport a USB connection for these iOS devices; when plugged in, the USB port will charge the device at the same time.

All four AVRs in the A20 series also support 4K video content pass-through and up-scaling, a Virtual Presence Speaker function with Dialog Lift for more accurate positioning of dialogs, and Dialog Level Adjustment for fine-tuning the balance of sound for dialogs and vocals. Yamaha’s Parametric Room Acoustic (YPAO) calibration technology that uses Reflected Sound Control (RSC) is also present on all models. However, while all the four AVRs are capable of multi-point measurement, only the RX-A3020 and RX-A2020 come with a new microphone that touts a more precise data capture. The flagship RX-A3020 also performs speaker angle measurements.

The RX-A820, RX-A1020 and RX-A2020 also feature dual HDMI outputs with a Zone B HDMI output for simultaneous HDTV viewing (of the same source) in two different rooms. Multi-zone control is further enhanced on the RX-A3020 with a Zone 2 HDMI that enables simultaneous delivery of content from two different HDMI sources to two separate zones (including 5.1-channel audio to the second zone). It can even bitstream video and multi-channel audio to Zone 4.

Physically, the four new AVRs share the same cabinet dimensions as their predecessors. Naturally, the A.R.T. (Anti-Resonance Technology) Wedge - which is a fifth foot in the center of the unit that helps to dampen vibrations - is still present on the new models. With the exception of the RX-A820, they also boast a symmetrical power amplifier layout. Going up the chain, only the RX-A2020 and RX-A3020 have a H-shaped cross member frame; but the latter is the only one to have a 'double-bottom' construction.

The Aventage RX-A20 series is expected to go on sale from end November.

Here's a table highlighting the key differences between the four receivers: 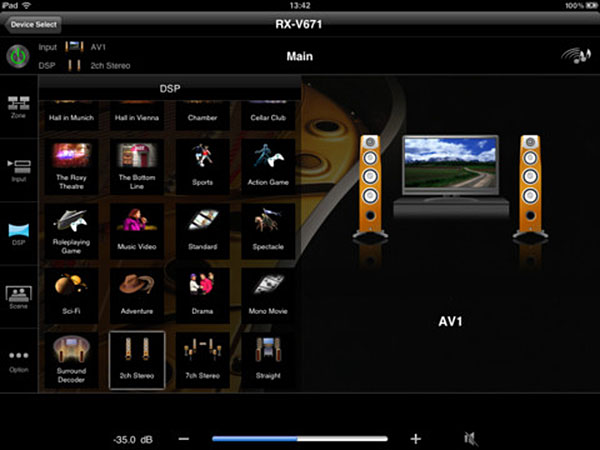