If AMD's first Fusion processor debuts as planned next year, it would be more than a year behind Intel's similar effort, the dual-core Clarkdale processors. Currently, AMD's integrated graphics chipsets have the GPU on the motherboard and things appear to be the same for its new refresh of the 790GX chipset. 'Imaginatively' named the 890GX, AMD does get one over its rival with this new chipset. The updated Southbridge used with this chipset, the SB850 comes with native SATA 6Gbit/s, including RAID (0, 1, 5 and 10) support.

Up to six SATA 6Gbit/s ports are onboard; additionally the SB850 continues to support the PATA interface (another feature that's not standard for Intel) and the usual HD audio functionality. Unfortunately, there's no USB 3.0 support yet, though one gets 14 USB 2.0 ports on this Southbridge, an increase of two over the 790GX. For the AMD 890GX motherboards we have received so far, USB 3.0 is implemented with an NEC controller instead, so at the very least, one should be getting USB 3.0 on some of the offerings.

As for the 890GX, it's a minor update over the 790GX. Think in terms of the AMD 780G going to 785G. That means for the integrated GPU, the changes are mostly in the newer Universal Video Decoder (UVD 2.0) and having support for DirectX 10.1. The actual graphics core (RV620) remains similar to that on the 790GX, with an identical number of shaders and the same 700MHz clock speed. Like the 790GX, vendors can give the integrated graphics on the 890GX a slight boost by adding SidePort memory (usually 128MB of onboard memory clocked at 1333MHz).

Not surprisingly, the integrated graphics on the 890GX is named the Radeon HD 4290, which puts it in the same class as the Radeon HD 4200 on the AMD 785G. The difference between the two is that the version on the 890GX is 200MHz faster than the 785G. However, like the 785G, the audio is less than ideal for HTPC enthusiasts, as it only supports 2-channel LPCM over HDMI and not multi-channel. Below is the architectural overview: 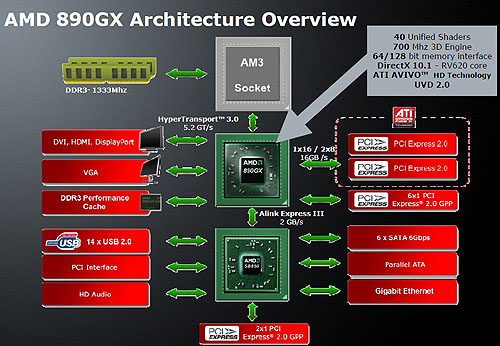 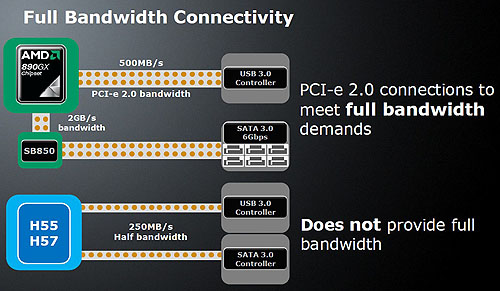 However, we did find an option called 'CPU Core Control' in both of our 890GX motherboards, which allows users to turn on/off certain CPU cores manually. We aren't too sure if this will allow enthusiasts to unlock their Phenom II processors like before but we'll get back to this once we have more time with these boards.

As you can tell, the 890GX is not much of an update over its predecessor from an end-user point of view. Unless you're ready to upgrade to SATA 6Gbit/s and USB 3.0 hardware immediately, the integrated graphics is the same on paper. Before we dive into the performance aspect, we have two 890GX boards up for review (from Gigabyte and MSI ) and we'll see if vendors are able to spin an attractive case for this chipset. Here are their specifications: