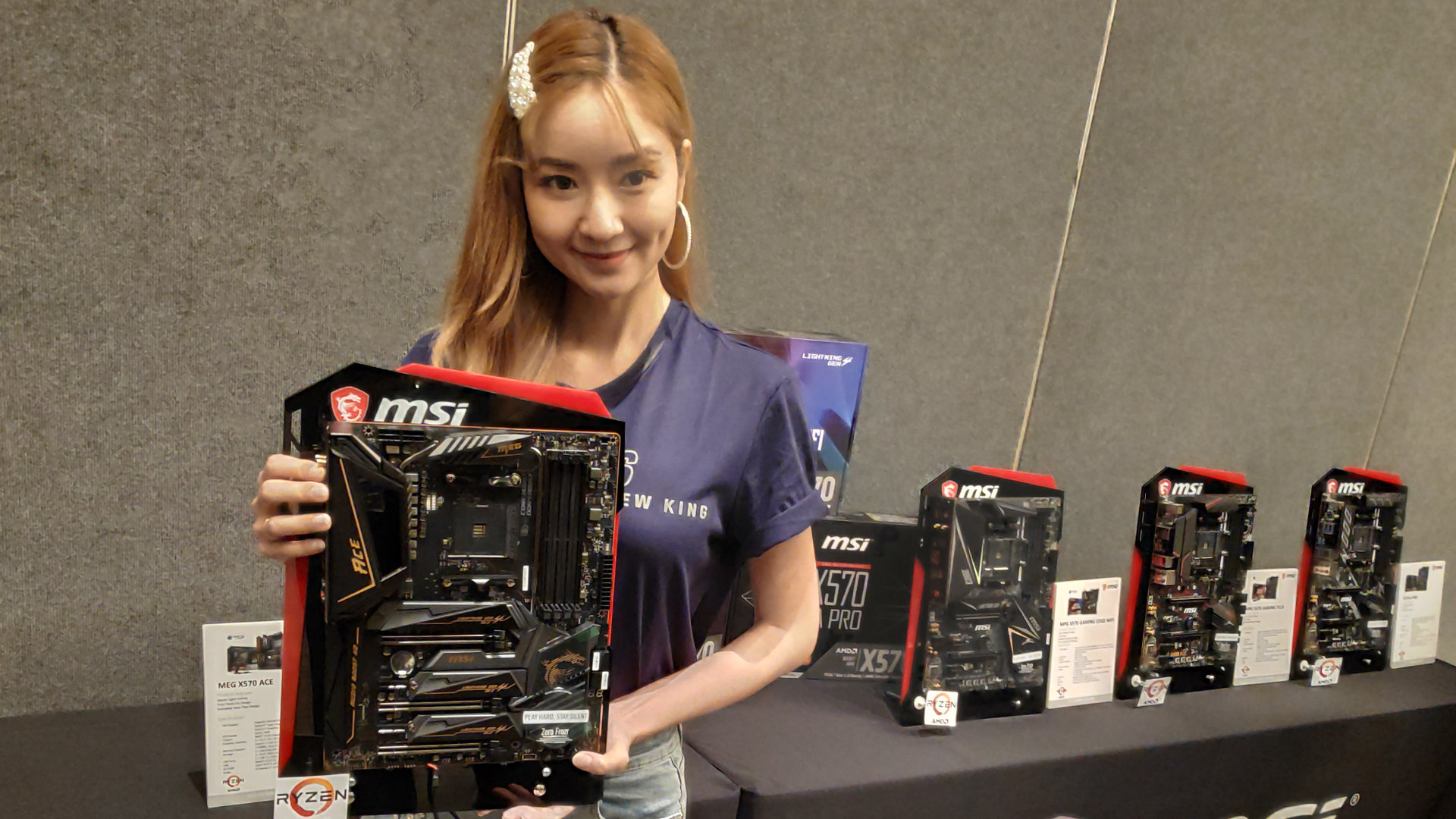 AMD has wrestled back plenty of attention in the aftermath of Computex 2019, not least of which for their 3rd Gen Ryzen processors and its ushering of PCIe 4.0 and more. Standing ready for these new advancements are MSI with a slew of X570 motherboards, led by the flagship MEG X570 Godlike.

Speaking to partners and members of the media, product manager Bobby Yuan, computing and display department, shared some of MSI’s design pillars behind these new boards. On a broad level, he calls them Tornado, Lightning and Earthquake – referencing the awesome strength of these elemental forces to ground their key features. 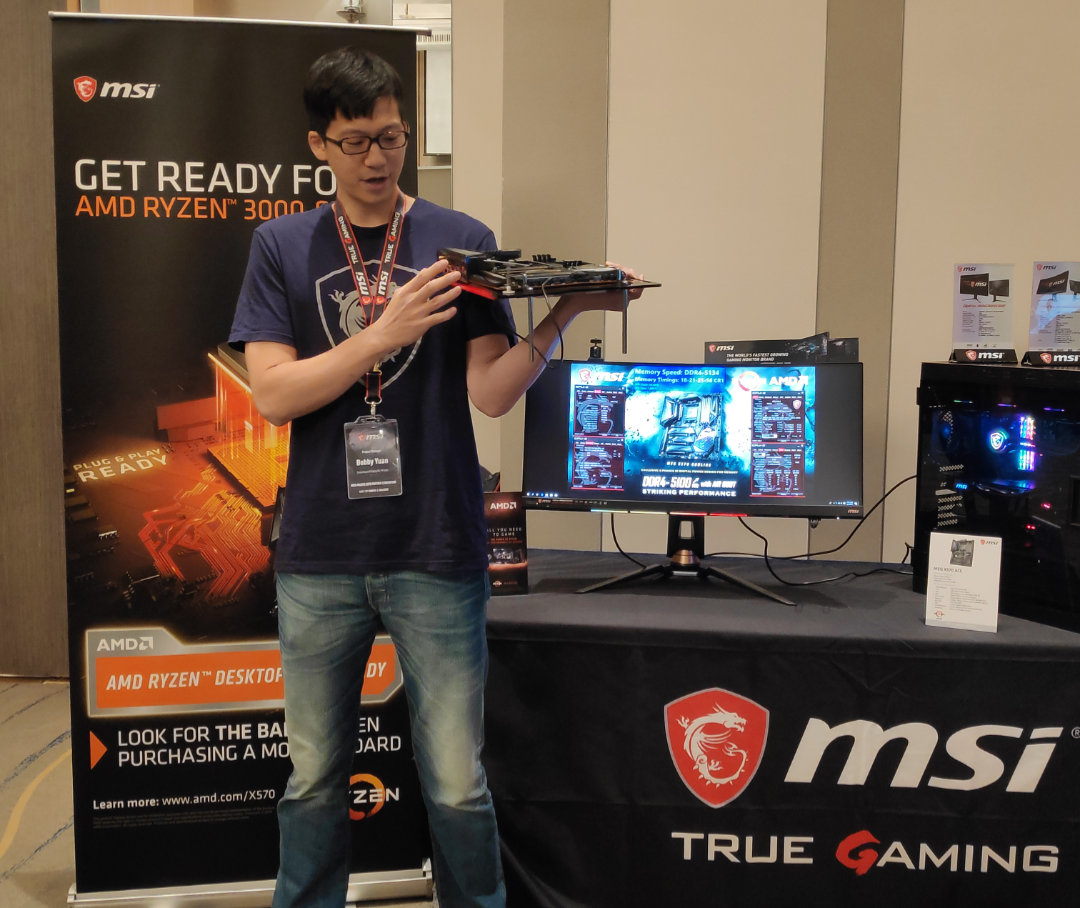 A Tornado’s worth of cooling power

Strong winds? What else could MSI be talking about other than their beloved Frozr heatsinks? Like their GPUs, these heatsinks are equipped with a 50/100mm fan using their patented ‘Propeller Blades’, which promise up to 20 percent more airflow than conventional designs. Pry even deeper and you’ll find double ball bearings used to extend the fan’s lifespan. When under low load, these fans will stop to preserve power and eliminate unnecessary noise, only spinning back up once temperatures rise past 50 degrees Celsius.

But there’s more to the picture than just a whirling vortex of air. MSI has also given the board’s copper heat pipes a revisionary pass, extending its coverage across the board for better heat dissipation and thermal conductivity. This is paired with an extended, aluminium-covered heatsink to further boost efficiency, allowing you to maintain lower temperatures for a safer and more stable overclocking experience.

Follow the pipe trail and you’ll land on the M.2 Shield Frozr, which as its name implies shields your SSDs against heat. Again, this lowers the chances of thermal throttling, letting you reap the full benefits of your speedy NVMe drives. To earn its flagship chops, the Godlike features these physical shields on both sides to maximize effectiveness. 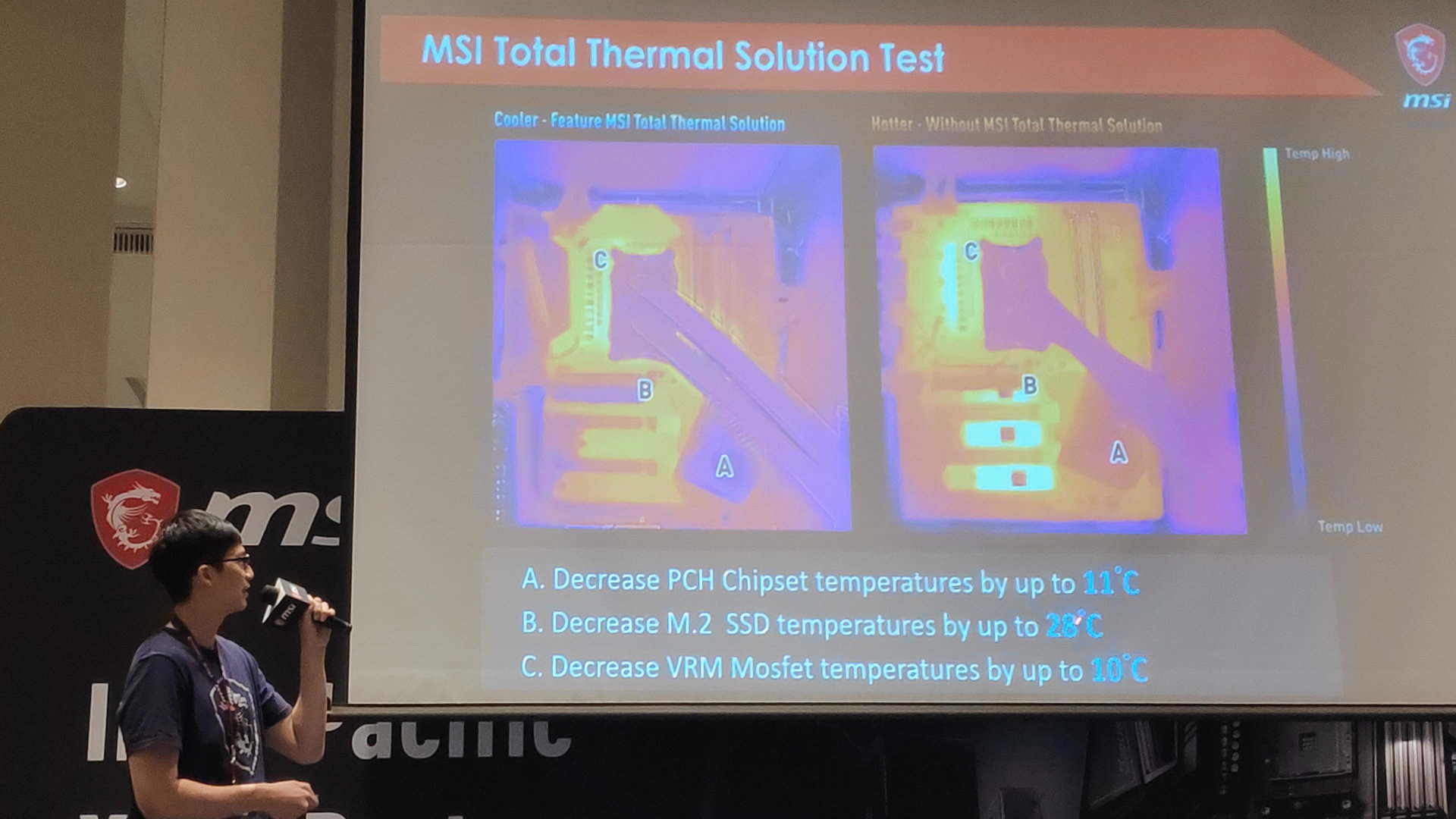 In total, Yuan says their total thermal solution sees temperature reductions of up to 11 degrees Celsius for the PCH chipset, up to 28 degrees for the M.2 SSD, and up to 10 degrees for the VRM Mosfet.

At the speed of Lightning

With the base platform all settled, MSI are then free to obsess over speed. The star of the racetrack is, without a doubt, Lightning PCIe 4.0 capability. Compared to the previous generation, it doubles transfer bandwidth by delivering at speeds of 64 GB/s. Most folks would naturally want to fit a compatible GPU in that prized slot, but it turns out that MSI will also have a PCIe 4.0 add-on card to fit SSD storage.

However, Yuan also wanted to touch on the other improvements they’ve introduced with the X570 boards, as these factors also contribute to the overall performance. One of these is ‘10G Super LAN’ Ethernet to facilitate faster file transfers, a noteworthy aspect for MSI as they lay more attention on creators and their needs. Yuan showed an on-screen recording of a sample file transfer, and the difference was as good as night and day. The catch, of course, is that you’d need a solution that can accept such a fast transfer in the first place. 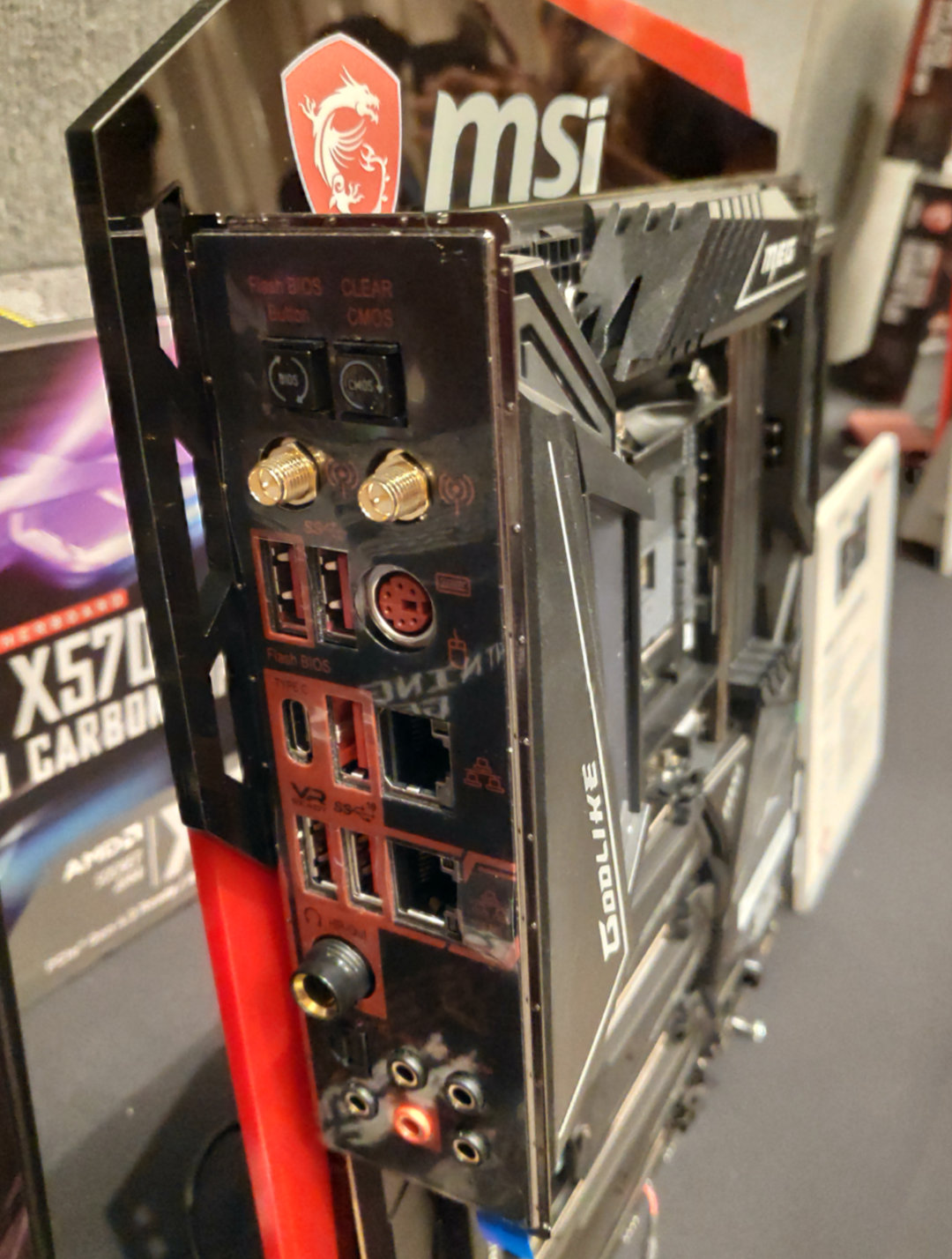 On the topic of connectivity is WiFi 6 compatibility and Killer Networking features, their availability depending on the model you choose. The Godlike, for instance, can also double up as a router to improve wireless strength for your other devices and gaming consoles.

Shaking up the competition with Earthquake

The last design pillar rounded back on the board’s very foundations. While Tornado was all about thermal performance and Lightning, the hardware, Earthquake focused on the final few things that made MSI’s X570 line-up different.

Did you know that they’re using server-grade PCBs for all these motherboards? Durability aside, MSI states that doing so grants a 30% decrease in signal loss while also improving heat resistance by up to three times. Both enhance the features already mentioned, namely thermal wireless connectivity and thermal throttling.

Yuan also threw in a mention of the various MSI Boosts available. The Core Boost, using a dual-loop IR35201 controller, takes advantage of the board’s layout and digital power design to deliver faster and undistorted current to the CPU. There’s also DDR4 boost which, on the Godlike with its 4 phase SOC design, can push speeds up to an impressive 5,100 MHz – and that’s just using air cooling alone!

MSI divvies up their X570 boards into different categories, just like they do any of their other products. At the top of the totem pole is the MEG (MSI Enthusiast Gaming) line represented by the Godlike and Ace, followed by the MPG (MSI Performance Gaming) line comprising the Gaming Pro Carbon WiFi, Gaming Edge WiFi and Gaming Plus models. 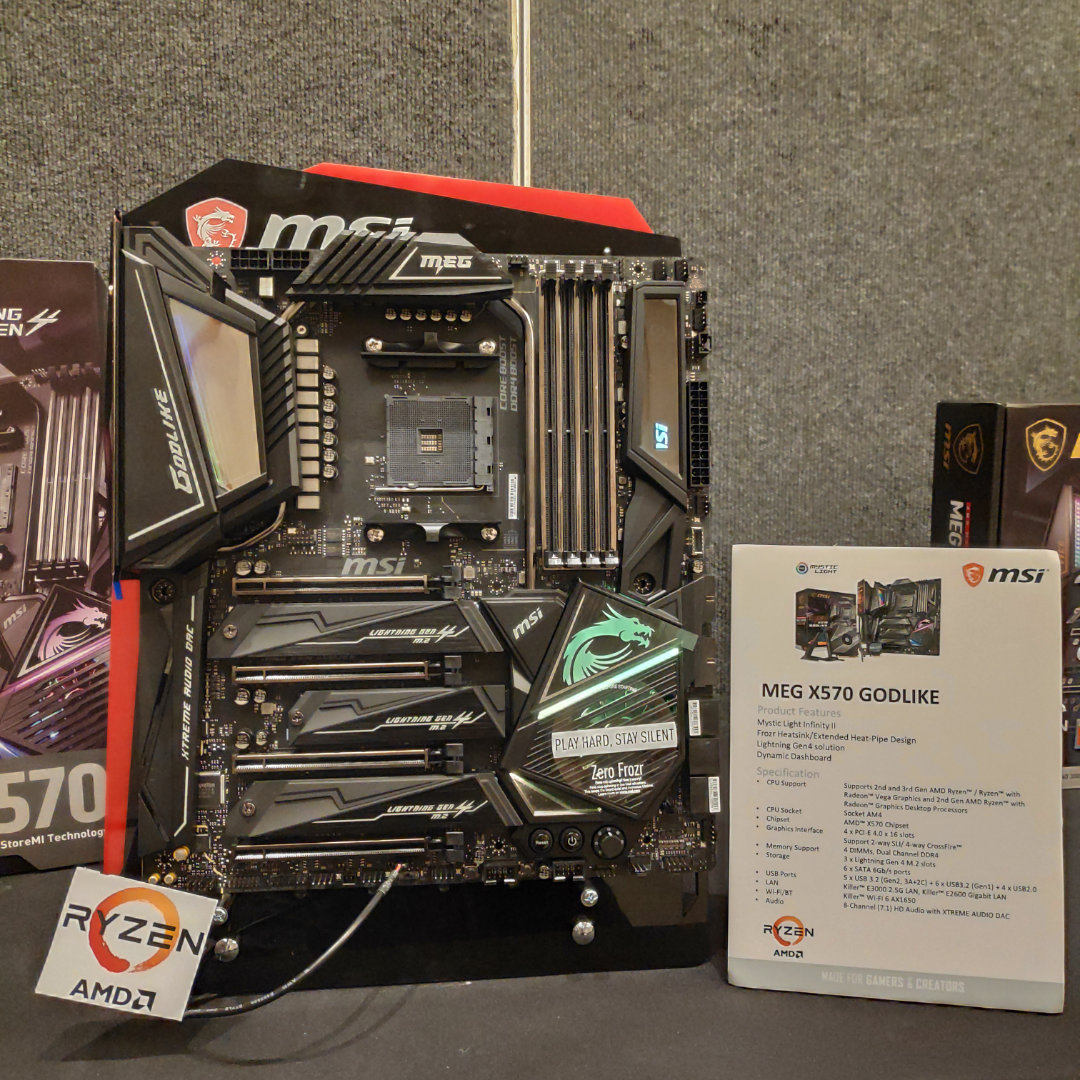 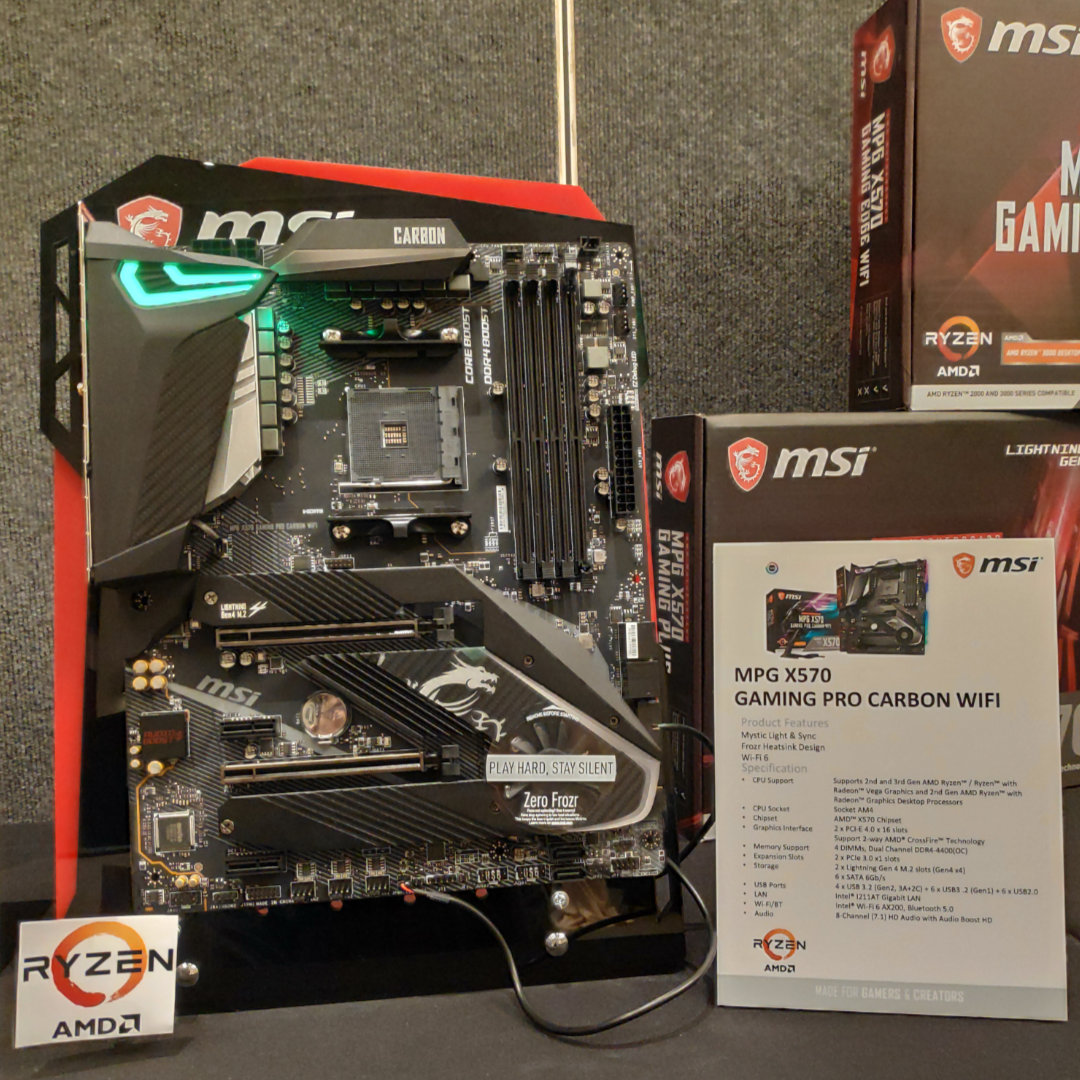 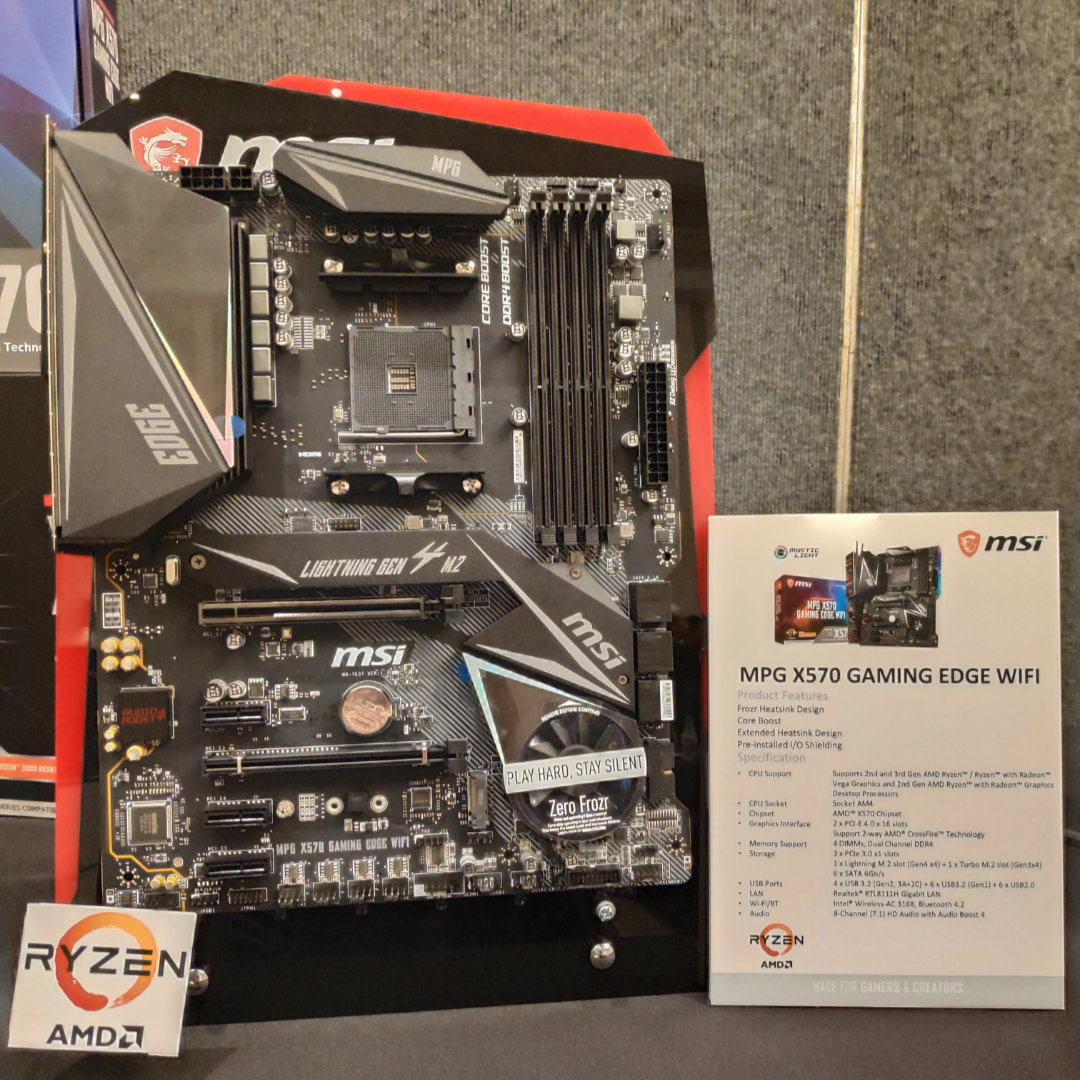 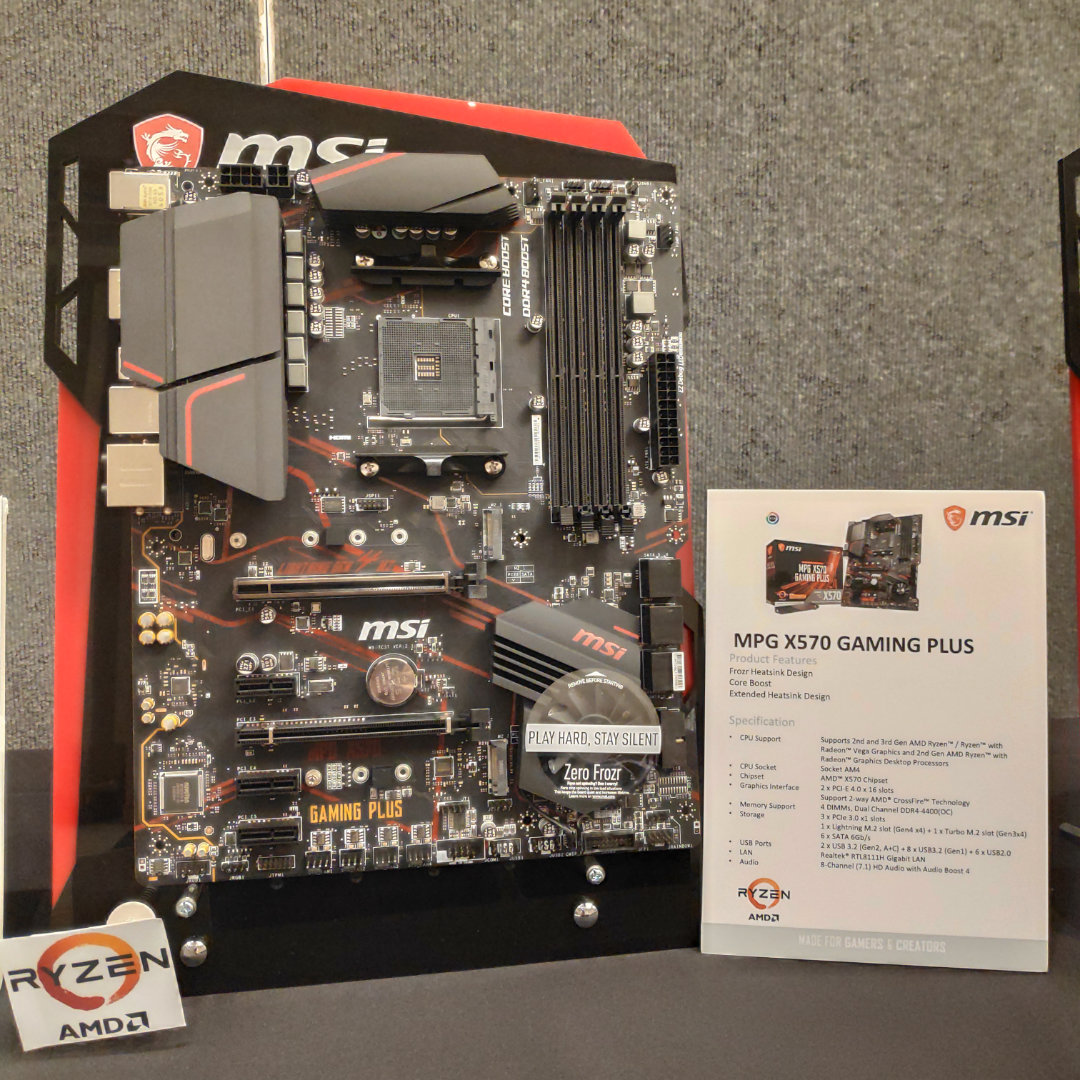 There’s one more gaming category on the list, the MAG (MSI Arsenal Gaming) line, although no X570 boards have been announced for it so far.

Given industry-wide trends, MSI is also expanding its reach to cover content creators. Presently there’s only one X570 board listed, the Prestige Series Creation, although the manufacturer is also teasing an A Pro model that is ‘coming soon’. 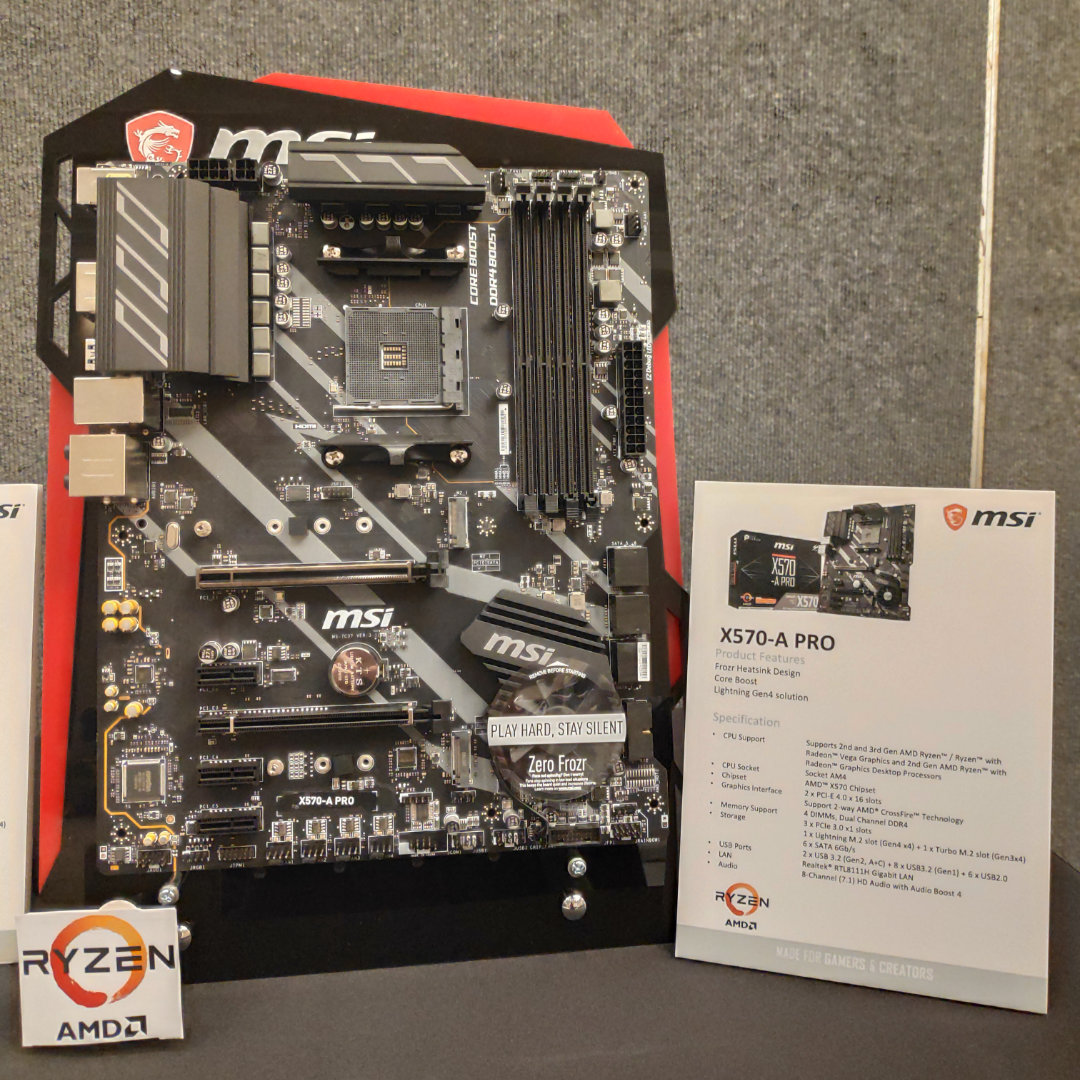 Given the strong initial support for the new X570, it’s little wonder that AMD’s ASEAN sales director, Ryan Sim, commented how “MSI is a very important partner in Southeast Asia.” The PC gaming market is finally heating up with competition once again, and there’s no denying that many are waiting to put AMD’s latest in a head-to-head against NVIDIA’s best once more units make their way into consumers’ hands.