Razer Huntsman V2 Analog review: Kind of like having joysticks on your keyboard
Shootouts

Considering both notebooks have very similar specifications, we were not surprised to see that both recorded very similar scores on our benchmarks. In terms of outright performance, there’s really no separating them. They are both as fast as the other. However, there are certain other factors to consider.

One key factor worth considering is storage. The Razer Blade Pro comes with only flash storage and it is not user upgradeable. This means that you are stuck with the configuration you pick. The Blade Pro comes with either 128GB, 256GB or 512GB. In our opinion, considering the size of game installations these days, 128GB is far too little to even be considered. 256GB works, but only if you are a disciplined gamer and have little need for additional storage requirements for other media such as music, photos and movies. Obviously, 512GB is most ideal, but that comes with a hefty price which we will talk about more later.

On the other hand, the MSI GS70 Stealth comes with the luxury of having both flash and traditional hard disk storage. On test system has just 128GB of flash storage, which is a little meager in our books, but happily MSI provides another SKU that offers double the amount, but at a higher price of course. The addition of a 750GB HDD (and a 7200rpm one at that) is definitely a nice touch and shows that MSI clearly know what its target audience want. Furthermore, even with all this storage options, the GS70 Stealth still manages a super-slim profile.

Which leads us to price. The top spec Blade Pro with 512GB of flash storage costs a not inconsiderable $3999.90. Our test unit with 256GB will set you back $3599.90. Back when the Razer Blade Pro was the only super-slim and portable 17-inch gaming notebook around, the premium was more or less justified. However, they are not alone in this segment anymore.

All in all, the Razer Blade Pro is a very well-built machine and has many things going for it. Obviously, its slim and compact dimensions necessitated slightly less powerful hardware in comparison to full-fledged 17-inch desktop replacement systems notebooks, but overall performance is still good and is more than capable of handling the latest games at high resolutions and at decent graphics settings.

In terms of overall build quality and finishing, the Razer has the upper-hand, and easily feels and looks more expensive and polished. Also, the SwitchBlade UI is easily its unique selling point and it is one of those few gadgets and implementations that are is both cool and actually functional. However, now that MSI is offering something that is equal is both dimensions, performance and, to a certain extent, build quality, is the Blade Pro worth the hefty premium that Razer is charging? 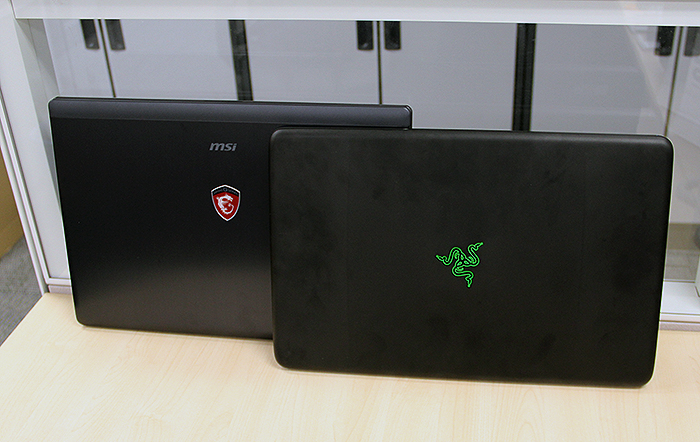 The MSI GS70 Stealth is a bit of a coming of age product for MSI. The company has had a tradition of offering value for money products with good specifications that often sacrificed on build quality, but not so with the GS70 Stealth. The all-aluminum chassis is a step in the right direction, even if it is not of the same high quality as Razer.

The GS70 Stealth also blows the Blade Pro out of the water with its storage options, numerous connectivity choices and features. The decision to offer both flash and traditional hard disk storage is a winner in our books and shows clearly that MSI is giving gamers what they want. As for connectivity, four USB 3.0 ports is much welcomed and the ability to drive up to three external monitors simultaneously via two Mini-DisplayPorts and HDMI is also cool, though maybe a bit overkill. Still, Mini-DisplayPorts are a much better choice as opposed to HDMI given the fairly powerful GPU that resides within. It will let users easily drive monitors with resolutions in excess of Full-HD.

All in all, taking account of everything , it is hard not to recommend the GS70 Stealth over the Blade Pro. It offers similar levels of performance, better storage, better connectivity options and at a much lower and palatable price point. The Blade Pro remains to be a very good gaming notebook and the SwitchBlade UI is cool and innovative. However, Razer needs to acknowledge that it is not the only ultra-slim and portable 17-inch gaming notebook around now, and needs to be priced accordingly to remain competitive.